Rights of an Advocate or a Lawyer 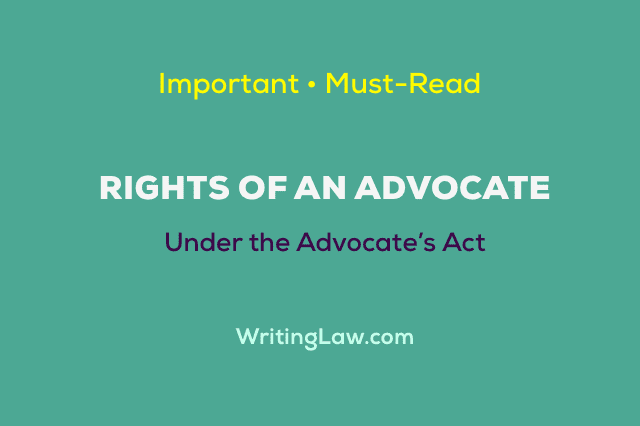 Whenever a person faces any problem or whenever any legal right of a person is hurt or is in danger, he moves towards the court. To make himself present in court, he seeks the help of an advocate. In short, advocates help people to secure and protect their rights. But what about the rights of an advocate? How are they protected?

In India, advocates are governed by the Advocates Act, 1961, which gives certain rights to the advocates. In this article, you are going to read about the rights that are available to Indian advocates.

Rights of an Advocate

The rights available to advocate can be comprehended from several legislations. They are:

The right or privilege of pre audience is contained under section 23 of the Advocates Act, 1961. In a general sense, the right of being heard before another is heard can be termed as pre audience. It is available as per the hierarchy system given below:

2. Right to practice the profession.

Advocates are granted the privilege to practice their profession in two categories: general protection and specific protection.

General protection is contained under Article 19(1)(g) of the Constitution of India, which states that every person has a right to practice any profession or to maintain any occupation, trade or business.

And, the specific protection with regards right to practice to an advocate is given under section 30 of the Advocate Act, 1961. Accordingly, every advocate whose name is registered in the State roll has the right to practise in all the courts, any tribunal or before the person who has the power to take evidence, throughout the territories to which this Act applies.

3. Right to enter in any court.

Section 30 of the Advocates Act, 1961 provides that every advocate has the right to practice in any court. Correspondingly, every advocate has the right to enter any court in any related matter. An advocate also has the power to enter the Supreme Court. He can even be present in any court to observe the proceedings, whether he has a case or not or whether he is connected to that case or not.

Right against arrest is contained under section 135 of the Civil Procedure Code. It states the condition under which an advocate cannot be arrested in any circumstance. As per the section mentioned, no advocate can be arrested under civil process if he is going to court or is presiding in court or is returning from court.

6. Privileges to a lawyer under the Indian Evidence Act, 1872.

Section 129 of the Indian Evidence Act, 1872 provides an exclusive right to the advocate, whereby he has the right to secure the privacy of the communications done between him and his client. As per this section, no one can be threatened to disclose any communication done between him and his legal advisor until and unless he proposes himself as a witness in the court of law.

Read Next: Restrictions on Advocates to Take Up Other Employment

Subhashini Parihar is pursuing B.A.LL.B (3rd year) from IPS Academy, Indore. She is creative, motivated, and passionate. She loves exploring and gaining knowledge about different things.
WritingLaw » Law Notes » Rights of an Advocate or a Lawyer

If you are a regular reader, please consider buying the Law PDFs and MCQ Tests. You will love them. You may also support with any amount you like. Thank You.
2021-07-01