What Is Section 133 CrPC? Explained With Punishment and Case Laws

There is a provision in the Code of Criminal Procedure under section 133 to remove the nuisance. The author analyses the law and focuses on the certain facilities available to the complainant for the removal of the nuisance.

First, what is a nuisance under CrPC? Nuisance is someone or something that irritates, causes inconveniences or makes life more difficult.

Types of Nuisance in CrPC

There are two types of nuisance under the Criminal Procedure Code. They are Public Nuisance and Private Nuisance.

Under section 268 of the IPC, public nuisance has been defined. It is an offence against the public, either by doing anything that is expressing frustration or by refusing or omitting to do anything necessary for the common benefit. It’s an act or omission that causes the public or persons generally who resides or occupies a common area to be harmed or upset.

On the other hand, private nuisance annoys or impacts a few people compared to the general public.

Section 133 CrPC establishes a rudimentary method for the disposal of public nuisances in emergencies. According to this provision, anytime a District Magistrate, a Sub-Divisional Magistrate, or any other Executive Magistrate specially empowered in this regard by the State Government receives a police officer’s report or other information and takes such evidence (if any) as he deems appropriate:

A. That any unlawful impediment or nuisance be removed from any public area, including any road, river, or channel that is or may be utilised legitimately by the public.

C. That the construction of any structure, or the disposal of any substance, that is likely to cause configuration or explosion, be avoided or stopped.

D. That any building, tent, structure or any of the trees is subject to such an extent that the building, tent or structure, or support, or removal or support of such a tree is likely to be lost, causing injury to individuals residing or carrying on business in or outside the neighbourhood and as such.

E. That any tank, well, or excavation near to any such way or public area is fenced in such a way as to prevent public risk.

F. Any harmful animal should be killed, confined, or otherwise dealt with.

Such Magistrate shall, within a period to be determined by order, make a conditional order requiring the person who causes such obstruction or nuisance; or who carries on or holds such good or goods; or holds, possesses or controls such buildings, tents, structures, substances, tanks, wells or excavations; or possesses or owns such animals and tree:

I. To remove, desist (stop doing/discontinue), prevent, remove, repair, fence, destroy such public nuisance or obstruction or animal as the case may be.

II. Or, if the accused person objects to appear before the Magistrate or any Executive Magistrate subordinate to him at a time and place fixed by the order, and show cause why the order should not be made absolute, in the manner hereunder provided.

Note: No order made by a Magistrate in accordance with this section may be challenged in a civil court.

The punishment for the conduct of offences concerning public nuisance is provided under sections 268 to 294A of the Indian Penal Code.

In cases which are not provided under section 290 of the Indian Penal Code, public nuisance is punishable. These are fined offences that can extend up to Rs. 200. The remedy in the case of private nuisance is a civil suit.

Here are some of the important case laws and judgments on section 133 CrPC.

1. Ajeet Mehta vs the State of Rajasthan

Fodder was determined to constitute contamination of the atmosphere and thus public nuisance on a particular plot in a residential colony. The order to remove this nuisance was held valid, and the respondents were told to perform no food business on the land.

It was noticed by the High Court of Andhra Pradesh that the power to close a factory creating pollution has been removed by the Water Act, 1974, from the power of the Sub-Divisional Magistrate.

4. Ram Avatar vs the State of UP

Auction of the vegetables in the town’s private house and the parking of vegetable carts on the public roads outside the building must necessarily cause some discomfort to the public and also to the people in the town. But it doesn’t justify action under section 133 of CrPC.

Prostitutes who continue their business in order and silence can’t be interfered with until they become an annoyance by asking passers-by.

Here is the above information in this sample image. 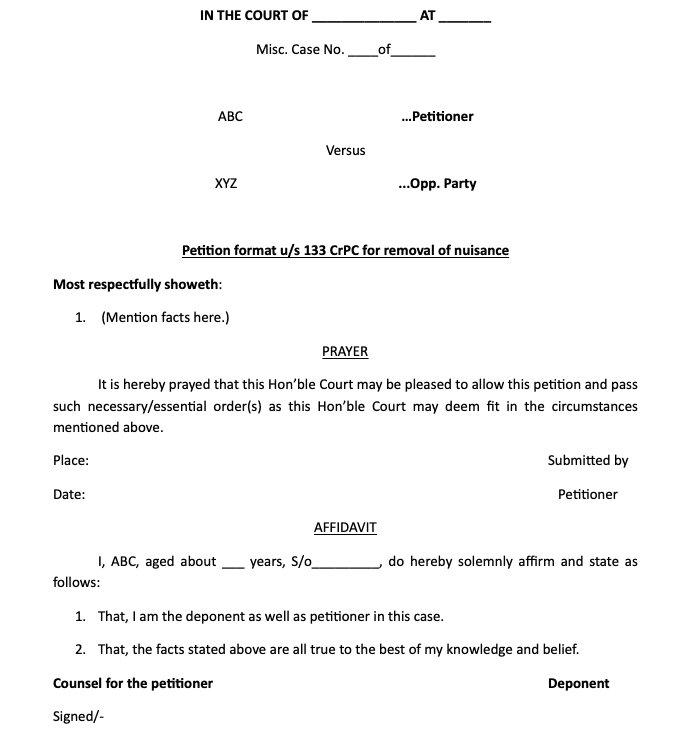 This article is written by Amit Kumar Das, B.Tech, LLB. He is a practising advocate from Odisha High Court & Puri District Courts.
WritingLaw » Law Notes » What Is Section 133 CrPC? Explained With Punishment and Case Laws

If you are a regular reader, please consider buying the Law PDFs and MCQ Tests. You will love them. You may also support with any amount you like. Thank You.
2021-10-14