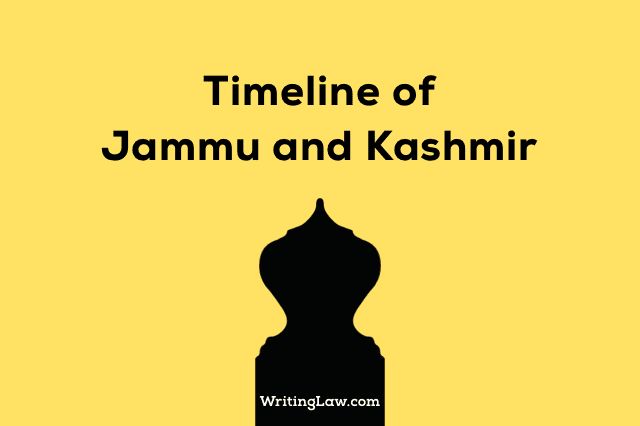 1. On 26th Oct 1947, the Instrument of Accession was signed between the Government of India and Hari Singh, who was the Maharaja of Jammu and Kashmir. It was agreed that Jammu and Kashmir would become a part of India.

2. On 17th Oct 1949, Article 370 was incorporated in the Constitution of India. According to this, Jammu and Kashmir was given a different Constitution and different Flag from India.

6. In 1990, Armed Forces (Jammu and Kashmir) Special Powers Act: According to this Act, if the Governor of Jammu and Kashmir or the Central Government, is of the opinion that the whole or any part of the State is in such a disturbed and dangerous condition then this Act can be imposed.

7. In 2015, BJP with Peoples Democratic Party (PDP) formed a government in Jammu and Kashmir. In 2016, Mehbooba Mufti became the Chief Minister of Jammu and Kashmir after her father’s demise.

9. In December 2018, President’s rule was imposed in Jammu and Kashmir.

10. In May 2019, BJP won the parliamentary election. Their election manifesto talked about the scrapping of Article 35A and Article 370.

14. Now Jammu and Kashmir is a Union Territory with legislature.

15. On 2nd April 2020, Justice Rajnesh Oswal became the first Judge to take the oath as a Judge of the Jammu and Kashmir High Court under the Indian Constitution.

This is a guest post that has been completely written by the below-mentioned author. Opinions expressed are theirs. I, the admin of WritingLaw, just formatted the article and styled it. I have not touched the written part of the article except minor grammatical corrections.

This article has been written by Prachi Gupta. She completed LL.B in 2019 and is now pursuing LL.M.

If you are a regular reader, please consider buying the Law PDFs and MCQ Tests. You will love them. You may also support us with any amount you like. Thank You.
Explore WritingLaw's Homepage
2020-03-30