What is Plea Bargaining and Cases Where it is Allowed 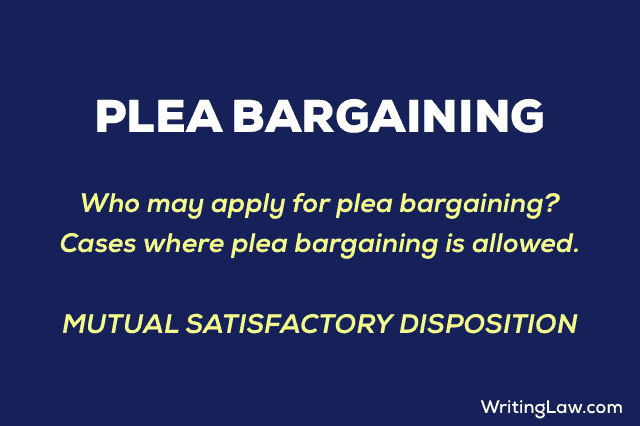 Plea Bargaining is one of the ways of Alternative Dispute Resolution. The concept of plea bargaining for Indian Laws has been taken from the United States of America and was added in year 2006.

Who may Apply for Plea Bargaining?

According to section 265B of Criminal Procedure Code, a person who is accused of an offence may file an application for plea bargaining in the court in which such offence is pending for trial. The application will contain a brief description of the case and shall be accompanied by an affidavit.

After receiving the application, the court shall issue a notice to the public prosecutor or the complainant of the case, as the case may be, and to the accused to appear on the date fixed for the case.

When the Public Prosecutor (PP) or the complainant of the case and the accused appear on the date fixed, the court will examine the accused in camera.

Cases Where Plea Bargaining is Allowed

The central government has determined the offences which affect the socio-economic condition of country. They are:

Note: No plea bargaining is allowed in the case of a habitual offender.

According to section 265C of CrPC, in working out a mutually satisfactory disposition, the court shall follow the following procedure.

When a case is instituted on a police report, the court shall issue a notice to the Public Prosecutor, the Police Officer/Investigating Officer who has investigated the case, the accused, and the victim of the case to participate in the meeting to work out a satisfactory disposition of the case.

The proviso of this section says that if the accused desires, then he may participate in such a meeting with his pleader.

When a case is instituted otherwise than on a police report, the court shall issue a notice to the accused and the victim of the case to participate in a meeting to work out a satisfactory disposition of the case. It is the duty of the court to ensure that the proceedings must be voluntarily by the parties.

After Working Out of Satisfactory Disposition of the Case

According to section 265D of CrPC, wherein a meeting under section 265C, a satisfactory disposition of the case has been worked out, the court shall prepare a report of such disposition which shall be signed by the presiding officer of the court and all other people who participated in the meeting.

If no such disposition has been worked out, the court shall record such observation and proceed further according to the provisions of this court.

Disposal of the Case

According to section 265E of CrPC where a satisfactory disposition of the case has been worked out under section 265D, the court shall dispose of the case in the following manner-

1. The court shall award the compensation to the victim according to the disposition and hear the parties on the quantum of punishment, if possible. Then the benefit will be given to the accused under the provisions of probation of Offender’s Act, 1958.
For Example: Releasing the accused on probation on good conduct.

Judgement by the Court

According to section 265F of CrPC, the court will deliver its judgement in the open court, and the presiding officer of the court shall sign the same.

Finality of the Judgement

Power of the Court in Plea Bargaining

Section 265H of Criminal Procedure Code mentions power of the court in plea bargaining. For the purpose of discharging its functions under this chapter, the court, which is allowing the plea bargaining must have the powers in respect of bail, trial of offences and other matters relating to the disposal of a case.

Statement of Accused not to be Used for any Other Purpose

Section 265K of CrPC talks about ‘Statement of accused not to be used.’ The statements or facts stated by an accused in an application for plea bargaining filed under section 265B shall not be used for any other purpose except for the purpose of Chapter XXIA of CrPC.

If you are a regular reader, please consider buying the Law PDFs and MCQ Tests. You will love them. You may also support with any amount you like. Thank You.
2021-04-24