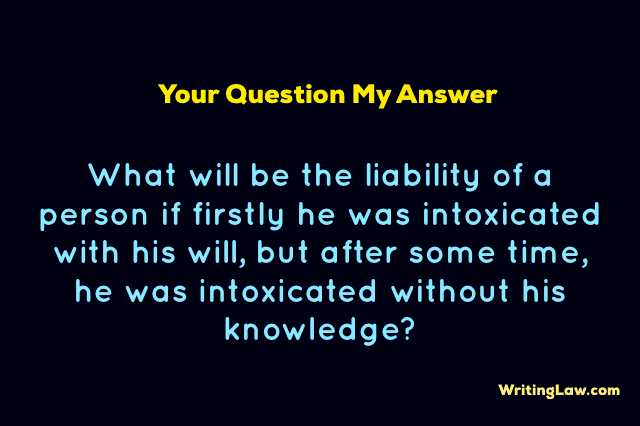 Can Intoxicated Person Get Defence From Law?

Answer: Section 85 and section 86 of the Indian Penal Code deal with the general defence to a person who commits an offence under intoxication.

Section 85 of IPC exempts a person from punishment provided that he committed the crime under the influence of intoxication where he had been intoxicated without his knowledge and against his will – that is involuntary intoxication.

Section 86 of IPC exempts a person from punishment provided that he had no intention to commit the offence or he had no knowledge of the offence committed under the influence of intoxication.

Here the intoxication is voluntary, but knowledge is absent.

The essential components of Sections 85 and 86 waive out a person’s liability for the act, which he has done in a state of intoxication. If at the time of committing the act he was-

(a) Incapable of knowing what the nature of the act is, or

(b) He was unable to know or understand that the act is either wrong or contrary to law.

(c) Provided that the thing which intoxicated him was administered to him without his knowledge or against his will;

(d) But if the intoxication is voluntary drunkenness, it is no excuse for the crime committed.

(e) Burden of proof lies upon the accused, that is, the person who is intoxicated and committed the crime.

In this case, the trial court held that the accused did not lose his state of mind as it is shown from the fact that he stood, argued, and shot at the time of the incident. He even walked to the police station on his own without any help from a third person and surrendered there. It is clear that he was capable of understanding things.

He was well aware of what he was doing. And thus, the trial Court convicted him for the offence of murder under section 302 of the Indian Penal Code. Later on, the High Court and Supreme Court also confirmed the conviction in a matter of the appeal.

Read Next: What Are the Differences Between Sin and Crime