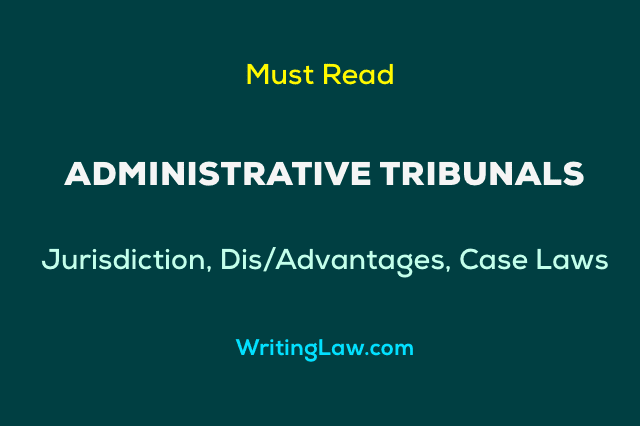 What is an Administrative Tribunal

With respect to administrative law, tribunals are referred to those bodies which have quasi-judicial power (not similar to court procedures). They are not like the sub-ordinate courts or superior courts. Quasi-judicial authorities are established under an act of Parliament or of the state legislature to discharge adjudicatory functions.

Our courts are overcrowded with numerous cases. Therefore, for speedy and effective justice, part of the judicial power is delegated to the tribunals.

Our Constitution did not have the provisions for administrative tribunals. The Swaran Singh Committee had referred to the creation of administrative tribunals, which resulted in the 42nd amendment of the Constitution of India, which inserted Article 323A (tribunals for administrative cases. example, public service matters) and Article 323B (tribunals for other matters. example, tax, foreign matters, food-stuff, rent etc.) into Part XIV-A with the primary objective being efficacious remedy and speedy justice in certain cases.

Note: Recently, the President of India officially promulgated an ordinance, named as Tribunals Reforms (Rationalisation and Conditions of Service 2021) on 4th April 2021 which took away the appealing power of the certain authorities and conferred the same to High Courts which are briefed below. The names of the Act are:

Areas where tribunals have no jurisdiction

These are the areas where administrative tribunals have no jurisdiction:

Sampath Kumar vs Union of India: Powers of the tribunal are similar to that of a High Court.

Union of India vs Deep Chand Pandey: In the presence of an administrative tribunal, High Court does not have the power to deal with cases.

Chandra Kumar vs Union of India: The judicial review power of the tribunals, which was taken away, was nullified.

Note: Only two writs, namely certiorari and prohibition, are available against the order of the administrative tribunal.

The four main advantages of administrative tribunals are:

The four main disadvantages of administrative tribunals are:

Conclusion: The executive should take steps to uplift the tribunals for proper functioning and reduce the burden on the judiciary. Time has demanded that tribunals must get reformed for their efficient functioning.

If you are a regular reader, please consider buying the Law PDFs and MCQ Tests. You will love them. You may also support with any amount you like. Thank You.
2021-06-23