Amendment in the Indian Constitution – Procedure, Modes, and Types 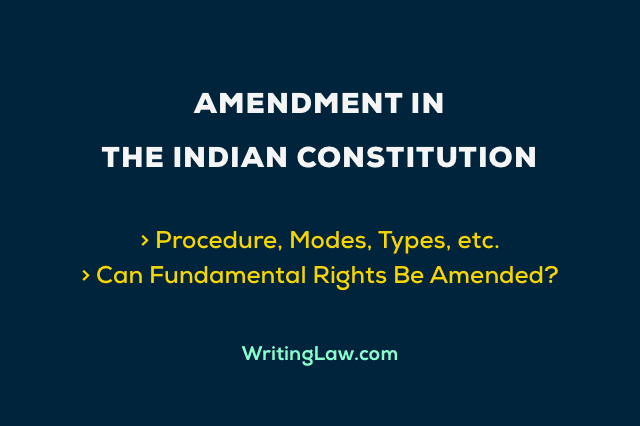 Law and society regulate each other. Law changes if changes take place in society. The laws can’t be stagnant. With the growing state of society, its norms and regulations also need to be amended timely.

The Indian Constitution is neither flexible nor rigid, but a combination of both. Article 368 talks about the powers and procedure for Parliament to amend the Constitution.

Procedure for Amendment in Constitution

For the amendment to be made in the Constitution of India, it has to be initiated by the introduction of a bill in either House of Parliament – that is, Lok Sabha or Rajya Sabha. The bill does not require prior permission of the President. It can be introduced by any member or minister.

Once the bill gets passed by both the Houses of Parliament, then it is presented before the President for his assent. And after receiving assent on the bill, the bill becomes Constitutional Amendment Act.

Modes of Amendment in Indian Constitution

The two modes of amending the Constitution are:
1. Informal Method
2. Formal Method

In this method, the words in the law do not change. It remains the same. The change takes place in its meaning and interpretation. For example, in Article 21, many amendments take place. But it never changes the content of Article 21 but changes the context, scope, and ambit. The right to life includes free air, education, medical aid, dignity, speedy trial, fair trial, and many more.

Types of Amendment in the Constitution

By Simple Majority of Parliament

Several provisions in the Constitution of India that can be amended by a simple majority, that is, more than 50 percent present and voting. Provisions like Article 5 – Citizenship, Article 169 – the creation of the legislative council, Article 239A – the creation of local legislatures or council of ministers.

By Special Majority of Parliament

By special majority means more than 50 percent of the total members and two-third of the present and voting. The total members in each House are 545 in Lok Sabha and 245 in Rajya Sabha. The provisions which get amended by the special majority are Fundamental Rights, Directive Principles of State policy, and all other provisions which are not covered under the other two categories.

By Special Majority of Parliament and Ratification of States

All the provisions in the Constitution which are related to the federal structure of polity can be amended (changed) by a special majority of the Indian Parliament and ratification of half of the total states.

Provisions like Election of the President, Supreme Court and High Court, lists mentioned in the seventh schedule, executive and legislative powers of the Union and the State, Representation of State in Parliament, and Article 368 itself.

Can Fundamental Rights Be Amended?

The court held that the word ‘law’ in Article 13 does not include the amendment of the Constitution. Therefore Fundamental Rights can be amended under Article 368. The same was approved in the case of Sajjan Singh vs. State of Rajasthan, 1965.

The Supreme Court, with the majority view, said that Fundamental Rights are out of the reach of the Parliament. The court emphasized that Article 368 does not give power to the Parliament but merely provides procedure as to how to amend. The Parliament’s power to amend the constitutional provisions is not under Article 368 but in Article 245. As we have read earlier that amending the Constitution is a legislative process whereas Article 368 provides only the procedure to amend. The court said that the amendment is a law within Article 13, and if in any case violates Fundamental Rights, then it shall be void or unconstitutional.

What is Basic structure can’t be listed, but the Supreme Court illustrated few features like the supremacy of the Constitution, separation of power, federal character, sovereignty, democratic character, and so on.

Read Next:
1. Kesavananda Bharati & Others vs the State of Kerala – Case Explained
2. What Is Election Law Amendment Act, 2021 and Its Pros and Cons

If you are a regular reader, please consider buying the Law PDFs and MCQ Tests. You will love them. You may also support with any amount you like. Thank You.
2020-11-02