Arrest Under CrPC Explained With Cases and Supreme Court Guidelines 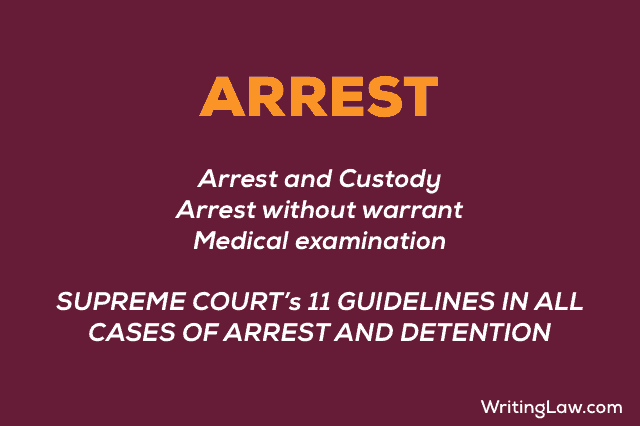 Arrest in the legal sense under CrPC means taking into custody of another person under the authority of law for the purpose of holding and detaining him to answer a criminal charge and preventing the commission of an offence.

Section 46 of CrPC prescribes the mode of the arrest. The words ‘arrest’ and ‘custody’ are not synonyms. In every arrest, there is custody, but vice versa is not true.

According to this section, an arrest of a person consists (except in the case of submission) of the actual seizure or touching of the body of a person with a view to his detention.

In Birendra Kr Rai vs UOI, 1992, the Supreme Court held that it is not necessary to handcuff a person. But could be completed even by spoken words if a person submits to the custody.

Arrest without a warrant (Section 41 CrPC).

The provisions of Section 50 of CrPC are mandatory. Where a person is arrested without any warrant, he should be immediately informed of the particulars of the offence and ground of his arrest, and where the offence is bailable, it is his right to be released on bail.

Search of the Arrested Person.

Section 51 of CrPC makes provision regarding the search of the arrested person and making an inventory of the articles found upon him.

It was held that when a person is arrested on suspicion that he was carrying stolen property and the property found on the search is seized, such seizure shall be reported to a magistrate.

Mahadev vs the State of Uttar Pradesh

Taking of signature of the person searched on the memo of the recovery list is not required by this section. And even if the recovery memo is not signed by the accused, then the search is not illegal.

Section 53 of CrPC provides that a medical examination will be done at the request of a police officer, not below the rank of Sub Inspector (S.I).

Anil A Lokhande vs the State of Maharashtra, 1981

Supreme Court held that if it is necessary for doing justice, then police officer or court can exercise such power.

> Swab- an absorbent pad or piece of material used in surgery and medicine to clean wounds, apply the medication, or take specimens.
> Sputum- a mixture of saliva and mucus coughed up from the respiratory tract.

With the scientific advancements in India, DNA Profiling also comes under the ambit of examination under section 53.

Examination of the Person Accused of Rape by a Medical Practitioner (on Request of Police Officer).

Section 54 of CrPC confers on the arrested person the right to have his medical examination done.

Sheela Barse vs the State of Maharashtra (Important case): Supreme Court has warned the lower courts not to adopt a casual approach to custodial torture.

Presented Before the Nearest Magistrate.

Section 57 of CrPC says that a person detained in custody must be presented before the nearest magistrate within 24 hours of his arrest. The period of 24 hours does not include the time necessary for the journey from the place of arrest to the magistrate.

The purpose of this section is to ensure that accused is presented before a magistrate competent to try with a minimum possible delay.

In the case of DK Basu vs the State of West Bengal, 1996, the Supreme Court issued a list of eleven guidelines in all cases of arrest and detention.

The eleven Supreme Court guidelines related to arrest and detention are:

1. The police officer who is going to arrest a person should bear accurate, visible, and clear identification and name tag with the designation. The particulars of all police officers/constables who handle interrogation of the arrestee must be recorded in the register.

3. A person who has been arrested or detained is entitled to give information to his friend or relative or other person known to him (within 12 hours).

4. The time, place of arrest, venue of custody must be notified by the police to the friend or relative or known person.

5. The person arrested must be made aware of his right.

6. An entry must be made in the case diary at the place of detention regarding the person’s arrest and mention the next friend of the arrestee who has been informed of the arrest.

7. The arrestee should, where he requests, be also examined at the time of his arrest and major and minor injuries, if present on his body, be recorded at that time.

8. The arrestee should be subjected to a medical examination by a trained doctor. (section 54)

9. Copies of all the documents, including the arrest memo, should be sent to the magistrate for his record.

11. A police control room should be provided at all districts and state headquarter, where information regarding the arrest and place of custody of the arrestee shall be communicated by the officer arresting within 12 hours of the arrest, and it should be displayed on a notice board.

Another important case on police custody is Nilabati Behra vs the State of Odisha.

If you are a regular reader, please consider buying the Law PDFs and MCQ Tests. You will love them. You may also support with any amount you like. Thank You.
2021-07-23