What Is Inter-State Arrest and Its Guidelines 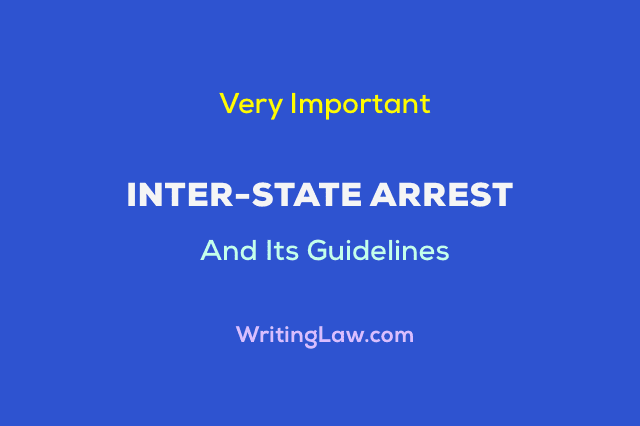 Generally, a person who has committed an offence is subject to arrest. Consequently, a person committing an offence is restrained. Various provisions related to arrest are given in the Criminal Procedure Code, 1973, but it does not provide the definition of the term “arrest”. In this law note, we will briefly learn what an arrest is and then focus on inter-state arrest and its guidelines.

According to the Farlex legal dictionary, the word ‘arrest’ means taking or keeping a person in custody by legal authority, especially in response to a criminal charge.

Arrest can be defined as the detention of a person by the legal authority so that the person can be deprived of his liberty and freedom.

The arrest may sometimes become necessary to obtain the correct name and address of a person who has committed a non-cognizable offence. The primary purpose of the arrest is to bring the accused person before the court and preserve the management of law.

An arrest can be made by the police officer, the magistrate, any person authorised by law or any other private person.

As per section 41 of the Criminal Procedure Code, 1973, a police officer can arrest a person with a warrant and without a warrant as well. He can also arrest a person committing a non-cognizable offence if the person refuses to give his name and address of the residence.

Magistrates, either executive or judicial, can arrest a person if any offence is committed in their presence within their local jurisdiction.

Further, for the general interest of society, CrPC empowers a private person to make an arrest without a warrant. As per section 43 of the Criminal Procedure Code, 1973, any private person can arrest any person who has committed a non-bailable and cognizable offence in front of him if no police officer is present anywhere near the offence scene.

What is Inter-State Arrest?

Recently in Sandeep Kumar vs the State (Government of NCT of Delhi) & Ors., several suggestions or guidelines have been framed by the Supreme Court for the police regarding inter-state arrest. The guidelines are as follows:

1. The police officer must take the prior written permission of the superior officer to go out of the state or union territory to carry out the investigation. He can take permission on the phone only in case of urgencies.

2. In cases where the police officer decides to arrest an accused in another state, he must write facts and reasons so as to satisfy why the arrest is necessary. The police officer must attempt to get an arrest or search warrant from the magistrate having jurisdiction. He can arrest an accused without a warrant only in case of emergency. And, in such cases, he must record compelling reasons to visit another state without getting an arrest or search warrant.

3. Before going out of the state, the police officer must make a detailed departure entry in the Daily Diary (DD) of his Police Station containing the name of the police officials and private officials going with him; vehicle number; the purpose of visit; specific place(s) that is/are to be visited; time and date of departure.

4. A lady police officer should be made part of a team if the arrestee (the person to be arrested) is a female.

5. The police officers should have their identity cards with them, and they should be in uniform. And further, they should carry accurate, clear and visible name tags with their designations on them.

6. Before visiting the other state, the police officer must contact the local police in whose jurisdiction he has to conduct the investigation. And, he must carry translated copies of the FIR and other documents in the language of the state he is going to visit.

7. After reaching the destination, the police officer must seek assistance and cooperation from the concerned police station. The SHO must provide legal assistance to the other state’s police, and an entry for the same must be made at the said police station.

8. After reaching the place of investigation, the police officer must search if anyone is to be strictly conducted as per the guidelines given under section 100 of the Criminal Procedure Code. The police officer must make sure to assemble all the independent public witnesses from the neighbourhood.

9. The police officer must follow the procedure given under sections 41A, 41B, 50 & 51 of CrPC. And the process of arrest must be carried out keeping in mind the guidelines given in the DK Basu case, 1996 and the provisions of CrPC.

10. An opportunity to consult a lawyer must be given to the arrested person before he is taken out of the state.

13. The magistrate must grant transit remand after thinking psychologically and not mechanically. He must make sure that the requirements of section 41(1)(b) of CrPC are satisfied, and he must set out reasons for his decision briefly.

15. Control rooms must be established in every district, and names and addresses of the persons arrested must be displayed along with the designations of the police officers who arrested them. And, the control rooms at the state level must obtain details of the persons that are arrested.

16. The police officer must form an arrest memo specifying the time and date of arrest and the name of the relative or friend to whom the information of arrest is given.

17. If possible, the arrestee must be allowed to take his family member to remain with him till the time he is produced before the jurisdictional magistrate.

18. In any case, the arrested person must be produced at the earliest before the Jurisdictional Magistrate (within 24 hours of the arrest, excluding the time of the journey).

20. The arrest should be made under section 41(1)(b) of CrPC by the police officer when he has reasonable suspicion and credible information. The materials produced by him must be sufficient to cause a bonafide belief.

21. Medical examination should be conducted at the earliest after the arrest so that the possibility of physical torture during the custody be avoided.

22. The police officer must maintain a detailed case diary with him specifying the investigations done by him.

23. The vehicle logbook used for transportation must be maintained and signed by the police officer making the arrest. He must specify if the vehicle was official or private, the name of the driver and how it was arranged. Priority must be given to official vehicles only.

24. The public prosecutor should provide the possible and required assistance to the police officer visiting his state during transit remand.

25. For the speedy, smooth and effective inter-state investigation, guidelines of the exact nature should exist in all the states and union territories.

26. To create awareness, the Ministry of Home Affairs (MHA) or the state government should circulate the rules or guidelines or notification from time to time.

27. Periodically, training should be given to the police officers to sensitise them. (Sensitise means to cause someone to respond to certain stimuli; make sensitive.)

28. Statement of the victim must be recorded at the earliest.

29. If the victim recovered is minor, they should be produced before the local Child Welfare Committee for a further decision concerning the custody. And, they must not be made to stay in the police station during the night hours.

Subhashini Parihar is pursuing B.A.LL.B (3rd year) from IPS Academy, Indore. She is creative, motivated, and passionate. She loves exploring and gaining knowledge about different things.
WritingLaw » Law Notes » What Is Inter-State Arrest and Its Guidelines

If you are a regular reader, please consider buying the Law PDFs and MCQ Tests. You will love them. You may also support with any amount you like. Thank You.
2021-07-16