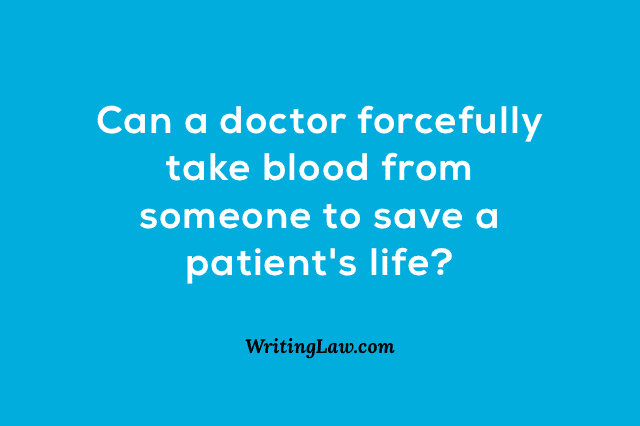 If a doctor forcefully takes blood to save a life, can he claim protection and escape punishment under section 81 IPC?

Question. A doctor is performing an operation on a patient, and he finds that the patient requires rare blood group O negative, and if blood is not given to the patient, then he/she will die. The doctor finds that an attendant has O negative blood group, but the attendant refuses to donate his blood. Then the doctor forcibly takes the blood, and the patient survives. Whether the doctor can claim protection under section 81 of the Indian Penal Code?

Answer. The doctor is liable, and he cannot claim protection under Section 81 of IPC because every person is sovereign (head) of his body. The Doctrine of Necessity applies to cause small harm to avoid big harm.

If by any chance, the doctor’s action is justified in court, it will have dangerous implications. It may set a precedent that confers the license to a doctor to take the blood of another person forcefully, and then there is the fear of misuse by doctors.

In this situation, if the court finds that the doctor did the job in a bonafide manner, then the court may reduce the degree of liability of the doctor. But the probability of justifying this act is very less.

Note: Doctrine of necessity attracts when small harm is caused to avoid significant harm. In this case, it nowhere attracts this phrase. To understand in detail refer to R vs Dudley and Stephens which is the landmark case of section 81 IPC.

This is a guest post that has been completely written by Prachi Gupta. WritingLaw, just formatted the article and styled it, without touching the written part of the article, except for minor grammatical corrections.