CHAPTER I, Section 1 to 5 of CRPC – PRELIMINARY 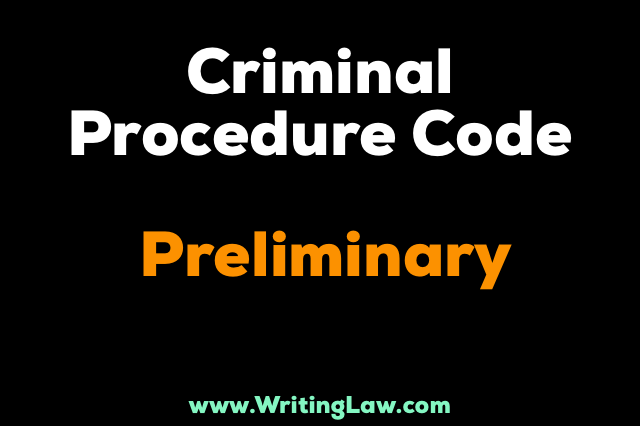 CHAPTER I, Section 1 to 5 of CRIMINAL PROCEDURE CODE (CRPC) – PRELIMINARY

An Act to consolidate and amend the law relating to Criminal Procedure. BE it enacted by Parliament in the Twenty-fourth Year of the Republic of India as follows.

(2) It extends to the whole of India : (The words “except the State of Jammu and Kashmir” omitted by Act 34 of 2019, s. 95 and the Fifth Schedule (w.e.f. 31-10-2019).)
Provided that the provisions of this Code, other than those relating to Chapters VIII, X and XI thereof, shall not apply-
(a) to the State of Nagaland,
(b) to the tribal areas, but the concerned State Government may, by notification apply such provisions or any of them to the whole or part of the State of Nagaland or such tribal areas, as the case may be, with such supplemental, incidental or consequential modifications, as may be specified in the notification.

Explanation–
In this section, “tribal areas” means the territories which immediately before the 21st day of January, 1972, were included in the tribal areas of Assam, as referred to in paragraph 20 of the Sixth Schedule to the Constitution, other than those within the local limits of the municipality of Shillong

In this Code, unless the context otherwise requires,

(b) “charge” includes any head of charge when the charge contains more heads than one.

(c) “cognizable offence” means an offence for which, and “cognizable case” means a case in which, a police officer may, in accordance with the First Schedule or under any other law for the time being in force, arrest without warrant.

(d) “complaint” means any allegation made orally or in writing to a Magistrate, with a view to his taking action under this Code, that some person, whether known or unknown, has committed an offence, but does not include a police report.
Explanation-
A report made by a police officer in a case which discloses, after investigation, the commission of a non-cognizable offence shall be deemed to be a complaint; and the police officer by whom such report is made shall be deemed to be the complainant.

(f) “India” means the territories to which this Code extends;

(g) “inquiry” means every inquiry, other than a trial, conducted under this Code by a Magistrate or Court;

(h) “investigation” includes all the proceedings under this Code for the collection of evidence conducted by a police officer or by any person (other than a Magistrate) who is authorised by a Magistrate in this behalf;

(i) “judicial proceeding” includes any proceeding in the course of which evidence is or may be legally taken on oath;

(m) “notification” means a notification published in the Official Gazette;

(n) “offence” means any act or omission made punishable by any law for the time being in force and includes any act in respect of which a complaint may be made under section 20 of the Cattle Trespass Act, 1871 (1 of 1871);

(o) “officer in charge of a police station” includes, when the officer in charge of the police station is absent from the station-house or unable from illness or other cause to perform his duties, the police officer present at the station-house who is next in rank to such officer and is above the rank of constable or, when, the State Government so directs, any other police officer so present;

(q) “pleader“, when used with reference to any proceeding in any Court, means a person authorised by or under any law for the time being in force, to practice in such Court, and includes any other appointed with the permission of the Court to act in such proceeding;

(r) “police report” means a report forwarded by a police officer to a Magistrate under sub-section (2) of Section 173;

(t) “prescribed” means prescribed by rules made under this Code;

(w) “summons-case” means a case relating to an offence, and not being a warrant-case;

(wa) “victim” means a person who has suffered any loss or injury caused by reason of the act or omission for which the accused person has been charged and the expression “victim” includes his or her guardian or legal heir;

(y) words and expressions used herein and not defined but defined in the Indian Penal Code have the meanings respectively assigned to them in that Code.

Comments:
(i) A Deputy Government Advocate of Rajasthan being a Public Prosecutor is competent to present an appeal to High Court from order of acquittal;
State of Rajasthan v Smt Mabhar Sheo Karan and Kalyan, (1981)

(ii) The expression “Judicial proceeding” defined in clause (i) of section 2 includes any proceeding in the course of which evidence is or may be legally taken on oath The law does not prescribe any particular method of presentation of challan, namely, that it should be presented by any police official When the challan was presented before the Court, who was acting as a Judicial Magistrate at that time, the first step in the judicial proceeding was sitting in judicial proceeding;
Shrichand v State of Madhya Pradesh, (1993)

(ii) in relation to any other area, be construed as a reference to a Judicial Magistrate of the first class exercising jurisdiction in that area;

(4) Where, under any law, other than this Code, the functions exercisable by a Magistrate relate to matters
(a) which involve the appreciation or shifting of evidence or the formulation of any decision which exposes any person to any punishment or penalty or detention in custody pending investigation, inquiry or trial or would have the effect of sending him for trial before any Court, they shall, subject to the provisions of this Code, be exercisable by a Judicial Magistrate; or

(b) which are administrative or executive in nature, such as, the granting of a licence, the suspension or cancellation of a licence, sanctioning a prosecution or withdrawing from a prosecution, they shall, subject as aforesaid, be exercisable by an Executive Magistrate.

4. Trial of offences under the Indian Penal Code and other laws.

(1) All offences under the Indian Penal Code (45 of 1860) shall be investigated, inquired into, tried, and otherwise dealt with according to the provisions hereinafter contained.

(2) All offences under any other law shall be investigated, inquired into, tried, and otherwise dealt with according to the same provisions, but subject to any enactment for the time being in force regulating the manner or place of investigating, inquiring into, trying or otherwise dealing with such offences.

If you are a regular reader, please consider buying the Law PDFs and MCQ Tests. You will love them. You may also support with any amount you like. Thank You.
2018-04-15