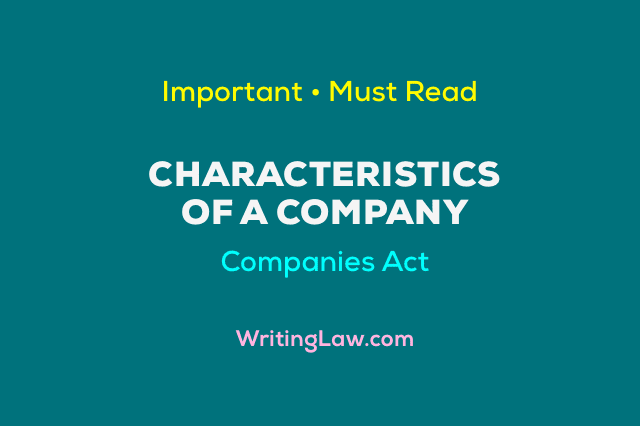 In this law note, we will learn about the nature and characteristics of a company. This will give us a basic understanding of what a company is and its existence.

What Is a Company

In simple words, a company is a business organization formed by an individual or group of individuals who work jointly to achieve a common goal or objective.

Nature and Characteristics of a Company

A company incorporated under the Companies Act, 2013 has certain nature and characteristics, which makes it a separate entity and also help us to understand the concept of a company, its functions and features in society.

The characteristics of a company are:

Let us learn more about these 13 characteristics of a company.

A company is a voluntary association formed by an individual or group of individuals. Most companies are formed with the motive of profit-making except the Section 8 companies (NGO). Profit earned is divided among the shareholders or saved for the future expansion of the company.

2. Company is an artificial person created by law.

A company is an artificial person created by law. It is regarded as a legal person capable of entering into contracts, owning property in its name, suing, and being sued by others.

Case Law: Union Bank of India vs Khader International Constructions and others: The Supreme Court held that the word ‘person’ mentioned in Order 33, Rule 1 of Civil Procedure Code, 1908 includes any company. Thus a company may also file a suit as an indigent (poor) person.

Info: Order 33, Rule 1 of CPC permits a person to file suit under the code as an indigent person if they cannot bear the cost of litigation.

3. Company is not a citizen.

In State Trading Corporation of India Ltd. vs CTO (Commercial Tax Officer), Supreme Court held that the State Trade Corporation, although a legal person, is not a citizen and can act only through a natural person.

Certain fundamental rights provided by the Indian Constitution to protect a person are also available to a company. For example – The right to equality (Article 14).

A company incorporated under the Companies Act, 2013 is treated as a separate person distinct from its members under law. Therefore, the company will be liable for all the acts of the company except any illegal act done by the directors of the company.

Case Law: Salomon vs Salomon: Salomon had a business in leather and shoe manufacturing. Due to some circumstances, he created his own company and sells his previous business of shoe manufacturing to this company. Salomon gave one share each to his wife, daughter, sons, and the rest of the company’s shares were held by him. After few years, the company was wound up and had some existing liabilities but did not have enough assets to pay off the liabilities. Unsecured creditors sued Salomon for repayment of their money, but the court held that the company was not an agent or a trustee for Salomon. The company is entirely different from the individual, and hence the contentions of the creditors could not be upheld.

The liability of a company may be limited either by Shares or Guarantee.

6. Company has a perpetual succession.

A company can come to an end only by the process of winding up. Death or retirement of a person does not affect the life of a company.

There are three types of companies under the Companies Act:

A public company is free to transfer its share from one person to another, whereas in a private company, the right to transfer shares is restricted. And in One Person Company (OPC), transferability of shares is not allowed.

As we have already studied, a company is a separate artificial person created by law, and a company is different from its members. Therefore, a company has its separate property and can own, enjoy, and dispose of properties in its name.

Case Law: In RF Perumal vs H. John Deavin it was held that no member can claim themselves to be the owner of the company’s property during its existence or its wind up. A company cannot even have an insurable interest in the property of the company.

9. Capacity to sue and be sued.

A company can sue and be sued in its name and may even sue its members. It also has a right to seek damages where a defamatory matter is published about the company, which affects its business.

A company can enter into contracts for the conduct of business in its name.

As a company is not a trustee for its shareholders, a shareholder cannot enforce a contract established by his company because he is neither a party to the contract nor entitled to any benefit from it.

Members may derive profits without being burdened with the management of the company.

Must See: 9 Types of Directors in a Company

A company is created by law, throughout its life, carries on its affairs according to the law, and ultimately is wind up by law. A company can be terminated only by the procedure of winding up.

Must Read:
1. What Is Articles of Association of a Company?
2. Types and Classification of Company under the Companies Act
3. Types of Prospectus Under Companies Act, 2013

Anushka Saxena is pursuing B.A.L.L.B (3rd year) from the Indore Institute of Law. She is hard-working, dedicated and committed to her work. She loves to explore new things and gain knowledge.
WritingLaw » Law Notes » 13 Characteristics of a Company – Companies Act, 2013

If you are a regular reader, please consider buying the Law PDFs and MCQ Tests. You will love them. You may also support with any amount you like. Thank You.
2021-07-14