Types and Classification of Company Under Companies Act, 2013 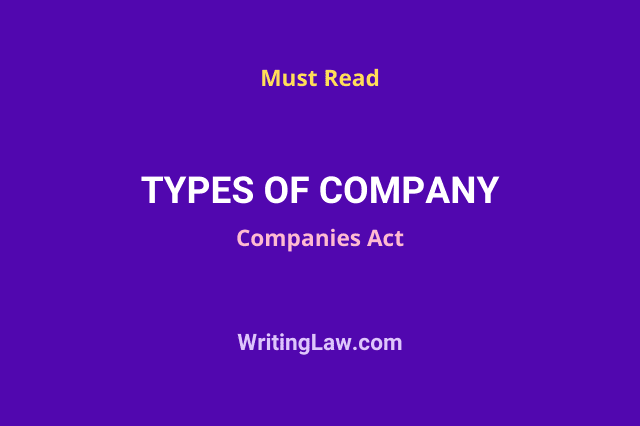 Companies can be broadly classified into two categories:

Let us learn more about them.

1. Classification on the Basis of Incorporation.

There are three ways in which companies may be incorporated.

1. Chartered Companies: These companies can also be called sovereign companies, which were incorporated before the Independence.

2. Statutory Companies: Statutory companies are constituted by a special Act of the Parliament or a State Legislature. The provisions mentioned in the Companies Act, 2013 do not apply to them. For example, the Reserve Bank of India, Institute of Company Secretaries of India.

2. Classification Based on Liability.

There are three types of companies under this category.

2. Companies limited by Guaranteed: It is defined under section 2(21) of the Companies Act, 2013. In this type of company, the person who has guaranteed to pay the company’s debt is liable to pay debts only when the company is winding up and has incurred losses.

3. Companies limited by Shares: It is defined under section 2(22) of the Companies Act, 2013. In these types of companies, members are liable to pay the amount only up to the value of unpaid shares held by them. Limited by Shares = No. of Shares x Unpaid Value

There are mainly three types of companies registered under the Companies Act, 2013, and we’ll study each one of them one by one.

According to section 2(71) of the Companies Act, 2013, a company means a company which:

Requirement of the minimum number of directors and shareholders: A public company requires a minimum of 7 shareholders and 3 Directors.

According to section 2(68) of the Companies Act, 2013, a private company is a company that has the minimum paid-up share capital as may be prescribed, and

If two or more persons jointly hold the shares of the company, then they will be treated as a single member.

People who shall not be included in the number of members are:

This company is defined under section 2(62) of the Companies Act, 2013. This Act brought the concept of One Person Company in which even a single person can constitute a company.

OPC was introduced to encourage corporatization for small businesses. JJ Irani Expert Committee recommended establishing One Person Company in 2005 with a simpler legal regime and exemptions for such a company.

Other Forms of Companies

Three other forms of companies that you should know about are:

Here’s more about them.

This type of company is defined under section 8 of the Companies Act, 2013. The primary objective of Nidhi Companies is accepting deposits and lending money to its members and borrowers without security, and members of this company are only individuals.

These companies work on the principle of mutual benefit, and this principle is incorporated to inculcate the habit of savings among its members.

Section 406 read with section 469 specifies that the Nidhi rules will apply to:-

Producer company, as defined by Section 581(a) of the Companies Act, 2013, is a legal entity with the common goals or activities as listed in Section 581(b) of the same Act.

Section 581(b) lays down certain objectives for which the producer company is formed, such as production, harvesting, procurement, grading, pooling, processing, manufacturing, sale, supply of machinery or equipment, education, technical services, consultancy, training, industry, etc. or any other company which provides financial aid to the companies mentioned above.

Section 2(42) of the Companies Act, 2013 defines a foreign company as a company or body corporate incorporated outside India but has a place of business in India.

Anushka Saxena is pursuing B.A.L.L.B (3rd year) from the Indore Institute of Law. She is hard-working, dedicated and committed to her work. She loves to explore new things and gain knowledge.
WritingLaw » Law Notes » Types and Classification of Company Under Companies Act, 2013

If you are a regular reader, please consider buying the Law PDFs and MCQ Tests. You will love them. You may also support us with any amount you like. Thank You.
Explore WritingLaw's Homepage
2021-07-23