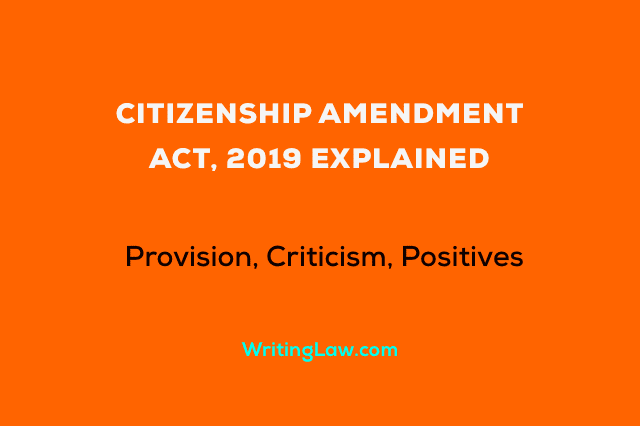 Article 11 of the Constitution gives power to the parliament to amend the laws relating to citizenship in the Citizenship Act, 1955. The Act of 1955 provides for getting citizenship by birth, by acquisition, by registration, by descent and by the process of naturalisation.

1. The amendment says that any Hindu, Sikh, Jain, Buddhist, Parsi, and Christian who entered India before 31 December 2014 will be treated as legal migrants.

3. The amendment allows every foreigner of any religion to take citizenship of India by the process of naturalisation or registration given in the Citizenship Amendment Act, 1955.

1. Any person who is of Indian origin and has stayed in India for a period of seven years before making an application for citizenship.

2. If the person applying for citizenship is minor and his parents are Indian, then he can get citizenship of India.

3. Any person who is a major in eyes of law and earlier was citizen of India or his parents were citizens of India may apply for citizenship of India. But subject to a condition that he lived in India for one year following the date of application.

4. If a person applying for citizenship is married to a person who is having citizenship of India and stayed in India for a period of seven years before making the application.

5. If any person has been registered as an overseas citizen of India and that person has stayed for one year before making the application for citizenship.

1. Before granting citizenship to any person, all the essential qualifications of Schedule III of the Citizenship Act, 1955 must be satisfied. Then only citizenship may be granted.

2. The application for getting citizenship of India has to be submitted to the central government.

3. The person to whom citizenship is granted in India must carry a good character, and he must be acquainted and well versed with any one language mentioned in Schedule VIII and must have renounced citizenship of the country where he was previously residing.

4. The person applying must have resided in India for a period of 11 years in the preceding 14 years and one year immediately following the date of application. This makes a total of 12 years.

The amendment of 2019 has decreased the number of years from 11 to 5 years and one year immediately before application. This makes a total of 6 years.

5. The provisions of the Citizenship Amendment Act, 2019 do not apply to two categories, and that is:
A. States that are covered under the sixth schedule of the Indian Constitution and that are Assam, Meghalaya, Mizoram, and Tripura.
B. States protected under inner line permit. Currently, there are four states in which inner line permit is operational. They are Arunachal Pradesh, Mizoram, Nagaland, and Manipur.

Note: Inner line permit is a document issued to a person that allows an Indian citizen not belonging to those states to travel there and stay for the period specified in the permit.

The people criticizing the Citizenship Amendment Act, 2019 give the following reasons-

1. This amendment allows only six communities that is Hindu, Sikh, Buddhist, Jain, Parsi, and Christian for citizenship in India.

2. By doing more documentation work, there shall be expenditure at the end of the central government, and it shall affect the economic situation of the country.

3. The amendment of 2019 affects the secular nature and structure of the country by allowing only six communities. There is a fact that there may be religious persecution of people of Muslim religion also in those three countries.

4. The question also arose that why only three counties are listed for the purpose of religious prosecution.

1. This has enabled India to do a survey of illegal immigrants who are residing in India without documentation.

2. On the other side, this Act has provided illegal immigrants a status of legal migrants by doing their proper documentation on records.

3. It is an effort made towards proper resource management. With adequate utilisation of resources, there is a long way of sustainability.

4. This provision applies only to foreigners, and it doesn’t affect any of the rights of Indian citizens.

5. This is not a violation of the constitution. As it amends the provisions of the Citizenship Act, 1955. The Act provides to give homage to the people belonging to six communities mentioned above who are religiously persecuted in their countries.

6. It not violative of the right to equality. The Act still provides citizenship to every foreigner of any religion to get citizenship by way of registration or naturalisation. It does not prohibit any person from any religion.

The Citizenship Act, 1955, provides five ways to attain citizenship of the country – India. The provisions with the best of their interpretation allow every person irrespective of religion to get citizenship of India.

The amendment of 2019 only seeks to help the people who are religiously persecuted in the three Islamic countries they are living in. It doesn’t affect the rights of Indian citizens at all.

Arushi, has written this post. The pros and cons are written with the best of information gained. You may yourself decide what is good or bad in the interest of the nation.

Read Next: What Is Election Law Amendment Act, 2021 and Its Pros and Cons

If you are a regular reader, please consider buying the Law PDFs and MCQ Tests. You will love them. You may also support with any amount you like. Thank You.
2021-04-29