What is Common Intention – Section 34 IPC 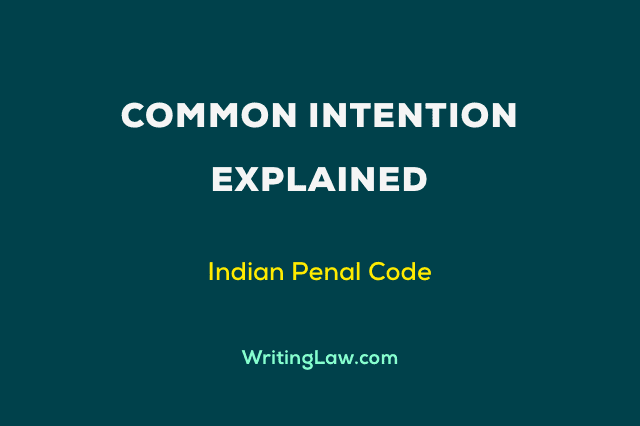 Section 34 of the Indian Penal Code lays down the principle of joint criminal liability. This section does not create any offence but establishes a rule of evidence. Common means something which is shared by all, and intention is something which is seen from the overt act of a person.

The essential elements of section 34 of IPC are:-

1. There must be some act which is criminal in nature.
2. The act must be done by two or more persons.
3. The act done by persons must be with the common intention of all.
4. Every person who is involved in that act is liable for such act.
5. Every person shall be liable as if he has done that act alone.

Common intention refers to the sharing of the mind. To constitute joint liability under section 34, it is essential that there should be prior meeting of minds. Before committing a criminal act, the persons involved in the act must know about the act. It is necessary for their minds to meet.

The meeting of mind may also develop on the spot of crime. It isn’t necessary that it should take place at the time of planning.

For example, four persons plan to beat A near riverside. And as soon as they reach the spot to beat A, they found a person B, who is enemy of A. After knowing their plan, B gets along with those four persons in order to beat A. Here B has joined them on the spot, but he is sharing common intention with all.

Joint Liability, Liability of All

All the persons who share common intention and are all involved in the act are jointly liable for the crime. It is immaterial that what amount of participation they have in the act, but their liability is equal to that of the main offender.

In Barendra Kumar Ghose vs Emperor, 1925

The court held that they also serve who stand and wait. It is not necessary that the participation of all persons shall be equal. One may do more, and one may do less. But that doesn’t mean that the person did less shall be free from the liability. His liability is the same.

For example, Five persons A, B, C, D, and E planned to rob a bank. Four of the members of the group that is A, B, C, and D, went inside the bank, and E was standing at the gate to aware his partners on the arrival of police. Here the act of E is nothing but standing at the gate of the bank, but still, he is responsible for the act in the same manner as everyone is.

Note: It is not necessary for a person to be physically present at the place of crime.

Common intention is a pre-arranged plan or prior meeting of minds before the commitment of the act. ‘Common’ means something which everyone has in the same proportion. Their object, motive, or target is common.

Whereas same intention is not a common intention because it does not involve a pre-oriented plan or prior meeting or sharing or minds.

For example, A is a colleague of B in office. B gets promotion instead of A being senior. A has enmity with B. A plans to take revenge from B.

On the other hand, B being an elder son in the house, has responsibilities. C, who is younger to B, did not like that his elder brother B got promoted.

One day A plans to kill B on his way from the office to home. C, the younger brother, also plans to kill B on the way to his home. Both A and C catch B at a spot and kill B. Here they both have killed B. But they are not sharing common intention. They have the same intention of killing B, but their ways were apart, and the intention was not common.

In Pandurang vs State of Hyderabad, 1955

The court said that a person cannot be vicariously liable for the act of another if their intention to commit the crime was not common. If their act is independent of the act committed by other, then it is not common intention. It shall be called same intention.

Can acquittal of one co-accused free others from liability?

But that is not the case. A person may get acquittal looking at facts and circumstances of the case. He may either have become approver, or he may be of unsound mind at the time of committing the act, or there may be any other reasonable reason for his acquittal. But it shall not benefit others. The liability of other co-accused shall remain the same.

If you are a regular reader, please consider buying the Law PDFs and MCQ Tests. You will love them. You may also support us with any amount you like. Thank You.
Explore WritingLaw's Homepage
2021-05-10