Companies Act of 1956 and 2013 Explained With Differences and Amendments 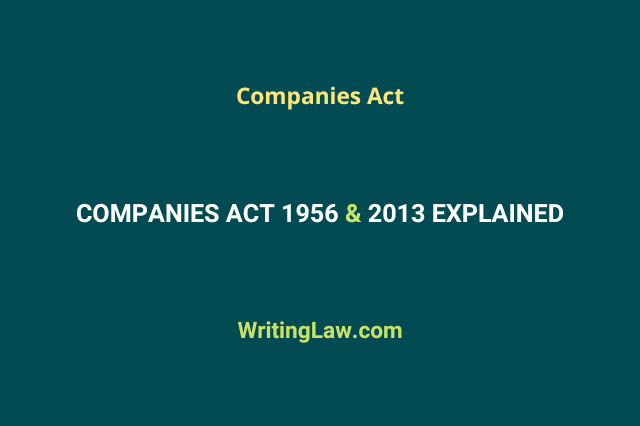 The word “company” is taken from the Latin word Com, which means with or together and panis, which means bread. As a result, it originally meant an association of people who ate together.

In the past, merchants used ceremonial gatherings to discuss business matters. Nowadays, business matters have become complicated and cannot be discussed in formal meetings. The corporate form of the organisation, therefore, gained more importance.

In the vernacular, society refers to an association of liked-minded persons formed to carry on some trade or business.

A company is a legal entity and a corporate body with a status and personality that is distinct and separate from the members that make it up. For example, Reliance is a company, and Mr Mukesh Ambani is its member/shareholder. Reliance (a company) ≠ Mr Mukesh Ambani.

According to common law, a company is a “juristic person” or “legal entity” which is able to survive outside the lives of its members. A company is a legal instrument to achieve a social and economic goal. It is, consequently, a mixture of political, social, monetary and statutory institutions.

Lord Justice Lindley defined a company as “an association of many persons who contribute money or money’s value to ordinary shares and use them in some trade or business, and who share in the profits and losses arising therefrom.”

The ordinary shares invested in this way are denominated in money and are the capital of the company.

There are members who are the individuals who participated in it, make it up, or to whom it belongs. The percentage of capital to which each member is entitled is his “share”. Shares are the entity which can be transferred, but their right to transfer can be limited as well.

Companies play a huge role in any developing economy. The Companies Act of 1956 was enacted not only from a legalistic, calculative and scientific point of view but also based on the young nation’s social and economic needs to ensure economic growth. It was introduced mainly to regulate the establishment, operation, financing and dissolution of companies.

The Companies Act of 1956 constitutes the company law in India. It came into force with effect from 1 April 1956. It is a consolidation act which represents the entire body of company law in its complete form and repeals the earlier Companies Act and its later amendments.

This Companies Act was largely based on the recommendations of the Company Law Committee (Bhabha Committee), which submitted its report in March 1952. This Act was the longest Act ever passed by our Parliament. Changes may be made to this law. The Companies Act 1956 consisted of 658 sections and 15 schedules.

Section 3 of the Act describes the definition of a company, and the types of companies that can be established, e.g. public, private, holding, subsidiary, joint-stock, unlimited, etc.

Further, Article 10E explains the constitution of the board of directors, explains the names of the companies, jurisdictions, tribunals, memoranda and changes that can be made.

Articles 53 to 123 explain shares, shareholders’ rights, explains bonds, share capital, the procedure of how share capital will be distributed, and powers within the company.

Articles 146 to 251 explain the management and administration of the company and the provisions on the registered office and name.

Articles 252 to 323 elaborate the provisions on the duties, powers, responsibilities and accountabilities of directors in a company.

Articles 391 to 409 explain arbitration, prevention and possession of a company.

Article 591 explains the formation of companies outside India and their fees and registration procedure, and everything else.

In India, the Companies Act of 1956 was the most important piece of legislation that empowered the central government to regulate the formation, financing, functioning and winding up of companies. This law contains organizational, financial and managerial mechanisms, all relevant aspects of the company. The Companies Act 1956 has been amended from time to time in response to the changing business environment.

The Companies Act of 2013 finally replaced the Act of 1956. The Act gave more powers to shareholders and also focused on women empowerment by mandating the inclusion of at least one woman on the board of directors of every prescribed class of companies in India.

The main objective of the Companies Act 2013 was to reduce bureaucratic red tape and remove the constant hurdles faced by businesses and start-ups during and after incorporation.

The Companies Act 2013 aims to reduce the number of government approvals and strengthen the self-regulation of companies to ensure that companies can operate quickly and enable them to be competitive players in the global economy.

Salient Features of the Companies Act, 2013

The Companies Act 2013 governs the incorporation, liability of directors and winding up of companies. The 2013 Act partially replaced the Companies Act of 1956 after receiving the assent of the President of India in August 2013 and came into force on 30 August 2013.

The Companies Act 2013 also allowed for cross-border mergers (Indian companies merging with foreign companies) with the permission of the RBI.

The 2013 law introduced the term “dormant companies”, which refers to entities that have not been in business for two consecutive years.

It established the National Company Law Tribunal, a quasi-judicial body to adjudicate various issues relating to companies. This body also replaced the Board for Company Law.

The limit of 18 months for the holding of the Annual General Meeting (AGM) from the date of establishment was decreased to 9 months.

The number of directors was increased, and now it can be 20. Only One person can become a director of a maximum of 20 companies, but he/she cannot be a director of more than 10 public companies at the same time.

The Companies Act 2013 provides that aggrieved parties can set off only punishable offences under section 441 of the Companies Act, 2013, and an offence punishable by fine or imprisonment or compoundable will be settled with the permission of a special court.

A dramatic turn of events occurred in the 1990s when India opened up to the world through liberalisation, globalisation and privatisation. This led to rapid changes in the corporate sector in India, which the old Companies Act could not sustain. Some amendments were made, but they did not help much.

The new Company Act of 2013 had fewer sections (470); many sections were new and obsolete sections of the Companies Act, 1956 were deleted.

The Act gave more power to shareholders and also aimed at empowering women by making it mandatory to include at least one woman as a director on the board of every prescribed class of companies in India.

A new concept of corporate social responsibility was introduced, and a new National Company Law Tribunal (NCLT) was also set up to reduce the burden on the Courts while providing speedy justice.

Major Amendments So Far in Companies Act of 2013

The corporate sector in India is constantly changing, and this can be understood from the fact that four amendments have already been made in the new Companies Act of 2013.

The first amendment was in 2015, followed by amendments in 2017 and 2019, with the last being in 2020. These changes were made to address issues raised by critics and bring some new changes to the corporate sector in India.

No company shall declare a dividend without setting off the losses and depreciation of the previous year or years against the profits of the current year.

The common seal has become optional and agreements can now be signed directly between two directors.

Notification of fraud by the auditor to the central government in case the amount exceeds the prescribed amount (currently Rs 1 million or more).

A company’s ‘CSR Committee,’ which may not have an ‘Independent Director,’ will have two or more directors on its CSR Committee.

Penalties have been rationalised, i.e. penalties will now be levied taking into account the size of the company, nature of business, injury to the public interest, nature and severity of default, the reputation of non-performance etc.

It reduced the burden on the NCLT by devolving certain approvals to the central government, such as converting a public company into a private company and changing the financial year.

No one can be a director of more than 20 companies, of which more than 10 organizations can not be public companies.

This new amendment made corporate social responsibility (CSR) mandatory. And if the companies were unable to spend the said amount on CSR, then they had to contribute it to the funds listed in Annex VII, for example, the national PM relief fund.

A provision was inserted in section 2(52) of the Companies Act 2013, excluding certain classes of companies from the definition of a listed company (in particular, to remove companies which are listed for debt securities only).

The CSR framework has been released. The Amendment Act 2020 exempts companies with CSR responsibilities up to INR 50 million per annum from setting up a CSR committee.

A lesser financial penalty will be imposed on a start-up company, manufacturing company, sole proprietorship or small company for non-compliance with the provisions of the Companies Act 2013, which is accompanied by monetary penalties.

The amendment adopted in the legislation used to be reactive in nature, e.g. the main amendments were a reaction to the global phenomenon of
i. the era of colonisation,
ii. Post-World War I period, and
iii. Opening of Indian markets in 1990.

However, the recent amendments are more proactive in nature and seek to make the legislation more effective, keeping in view the dynamics of society.

While we have touched on a few key factors that marked a major change between the 2013 Act and the 1956 Act, we must understand that the main objective of revising the Companies Act was basically to remove several loopholes that existed in the earlier Act. Simple and repeated amendments did not solve the problem as expected. The aim of the new law was to establish a corporate democracy in which the companies concerned would be given much more freedom to manage their own affairs without government approval or permission.

After privatisation, the Government of India felt that corporate liberalisation was the need of the day and took the initiative by introducing a new statute. Finally, it approved several amendments to ensure that companies run more smoothly with less government interference while increasing the accountability of companies for their actions.

Kaushiki Singh Bhadauria has written this article. She is a law student from SNDT Women’s University, Mumbai. Kaushiki is a judiciary aspirant and bibliophile with a keen interest in legal philosophy.
WritingLaw » Law Notes » Companies Act of 1956 and 2013 Explained With Differences and Amendments