Right of Muslim Women to Take Divorce Under Faskh 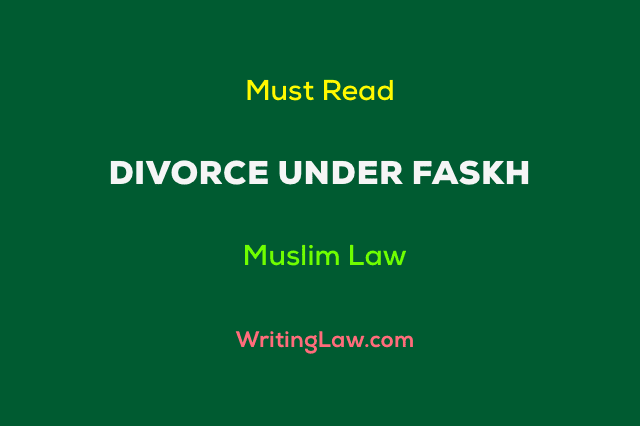 Faskh means cancellation, abolishment, recision, revocation and abrogation annulment. Under Muslim law, a lady can move towards Qazi for dissolving her marriage. This can be done when husband and wife both conclude that they cannot live together as husband and wife. The Qazi, after a thorough analysis, terminates the marriage.

Following were the main reasons for dissolving the marriage at the wife’s wish:
(a) the marriage is irregular.
(b) the person who has the option of avoiding marriage has exercised his option.
(c) the marriage was performed within prohibited degrees.
(d) the marriage is contracted by non-Muslims, with parties adopting Islam.

Recent judgement on the dissolution of marriage in Muslim

The court has noted that Section 2 of the Shariat Act mainly recognized all modes of extra-judicial divorce except Faskh.

In KC Moyin vs Nafeesa, 1972, the High Court had contended that a woman could only make use of remedies under the Dissolution of Muslim Marriages Act and could not request remedies under personal law (extra-judicial remedies).

In Raseena Pareekunju vs Muhammed Asif, the court has disagreed with the above statement after examining the provisions of the dissolution of the Muslim Marriage Act and has ruled that:

“On an overall analysis of the scheme of the Shariat Act as well as the Dissolution of Muslim Marriages Act as above, we are of the considered view that the Dissolution of Muslim Marriages Act restrict Muslim women to annul their marriage invoking Faskh except through the intervention of the Court. All other forms of extra-judicial divorce as referred to in Section 2 of the Shariat Act are thus available to a Muslim woman. We, therefore, hold that the law declared in KC Moyin’s case (supra) is not good law”.

Earlier, a Muslim woman could plead for the dissolution of her marriage under the doctrine of Faskh only, and she was not allowed to request remedies under personal law (extra-judicial remedies). With the passing of recent judgement (Raseena Pareekunju vs Muhammed Asif), the Kerala High Court overrules a 49 year old verdict that a woman could only make use of remedies under the Dissolution of Muslim Marriages Act and could not request remedies under personal law (extra-judicial remedies). As of now, a Muslim woman can now dissolve or end her marriage via four modes, that are: