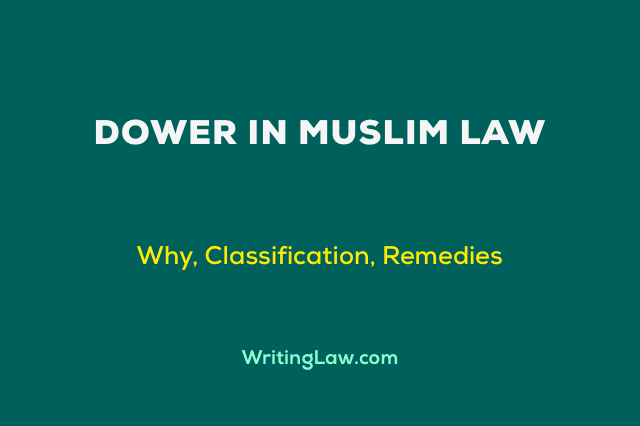 What is Dower/Mahr? Dower or Mahr is a sum of money that a husband pays to his wife on marriage. According to Mulla, “It is an obligation imposed upon the husband as a mark of respect to the wife.”

There existed many forms of sexual relationship between a man and a woman in the pre-Islamic era. Men, after using a woman as a chattel, used to make them move out. The condition of women was helpless, and their existence was of no vital use.

Therefore, the concept of Dower worked as a sense of security to the wife. If in case, the husband abandons the wife or compels her to move out, the amount of Dower becomes the source of her livelihood.

Headings:
Dower Essential for Muslim Marriage
Classification of Dower
What is Specified Dower
What is Customary Dower
Remedies to Wife on Non-Payment of Dower

Dower or Mahr is considered as an important essential to perform marriage (nikah) in Islam. It is regarded as a consideration to the wife in marriage. Without it, the marriage is deemed incomplete. It is in the form of a gift given by a husband to the wife.

In this case, Justice Mahmood said that in Muslim Law, Dower is a sum of money which a husband promises to pay to the wife in consideration of nikah. And if the Dower is not fixed at the time of marriage, then the law gives rights to the wife to decide upon the non-payment of Dower.

What is Specified Dower

If the amount of Dower is decided at the time of marriage, it is known as specified Dower. It may be settled even before or after the ceremony of marriage. If the parties to the marriage are minor, then the guardian can fix the sum of Dower on behalf of the minor.

Prompt means ‘immediately.’ This Dower is paid by the husband to the wife on demand immediately after the marriage. If the husband doesn’t give the sum of Dower to the wife, she may refuse herself to her husband.

Even if the marriage has been consummated, the right of prompt Dower of a wife does not extinguish. The wife has right to recover that amount afterwards. For recovering the prompt Dower, wife has three years of limitation period.

The deferred Dower is given to the wife if the marriage dissolves or the husband dies. The purpose of giving this Dower is the maintenance of the wife after the husband.

The Dower, which is to be paid at the time of marriage like prompt Dower, can become deferred Dower if the wife doesn’t demand immediately after marriage. The moment she demands the sum of Dower, the Dower is no more deferred and has to be paid to the wife immediately.

What is Customary Dower

If at the time of marriage, the amount of Dower is not fixed by the parties or the parties agree to the fact that the wife will not claim any dower after marriage. Then in such a situation, the wife is entitled to customary Dower.

The basis for determining customary Dower is-

Remedies to Wife on Non-Payment of Dower

1. If the amount of Dower is not paid to the wife, she can refuse to cohabit with her husband until the sum is paid to her. If the marriage is consummated then, she can’t deny cohabiting.

2. If the Dower is not paid to the wife then she can file a suit against her husband and recover the sum of Dower. Or, if the husband has died, she may recover it from his property or heirs.

3. The wife can remain in possession of the husband’s property until the amount of Dower is paid. But she does not have the right to sell or alienate the property.

A Thought About Dower

So many writers say that Dower is like a consideration given in a contract. But it is not a mere consideration. It is a mark of respect given to the wife at the time of marriage. Dower or Mahr is a security which is given to the wife for a secured livelihood. This is the reason it has been made as an essential element in the performance of Muslim marriage.

How to Remember Important Case Laws (2020)

How to Cover Local Laws in Judicial Exam 2020

How to Prepare for GS Paper in Judicial Exam

10 Reasons Why Indian Central Government is Powerful than State Governments