Enforcement of Foreign Judgement in India 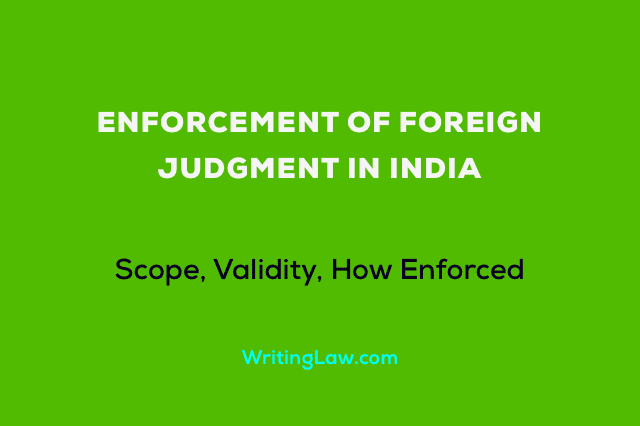 A foreign judgement is a judgement that is adjudicated by a court not situated in the territory of India.

The judgement of a foreign court is equally enforceable like that of a judgement delivered by Indian courts. The foreign judgement binds the party in the same manner Indian court judgement does.

When the foreign court passes a judgement, the decree-holder may get it executed either in the same court which passed the judgement, or it can be executed in any Indian court competent to execute it.

Section 13 of the Civil Procedure Code says that the foreign judgement is conclusive except in the cases mentioned below:-

1. If the judgement is not passed by a competent court, then it is not conclusive. If the court, which is deciding the matter in issue, has no jurisdiction to try the same, then the judgement is a nullity. It will have no enforcement.

The principle of res judicata shall not apply to the parties. The parties may again file the suit because earlier, it was not determined by a competent court.

2. If the judgement is not given on merits, the judgement shall not be conclusive. Merits mean that the case was tried with procedure. If, in any case, the parties are not given adequate opportunities or any issue is unheard, or the pieces of evidence are not taken properly, or the parties did not get reasonable time to be present in the court then it shall be deemed that the case is not heard on merits. And if the case is not heard on merits, then it shall not be binding to the parties.

For example, If the parties are Hindu and their case is being tried in an Islamic country, then the shariah law shall not be applicable to them. The parties will be governed as per Hindu law only.

4. If the judgement given by a foreign court is opposed to the principle of natural justice, then it shall not be conclusive.

There are two principles of natural justice:
Nemo judex in causa sua – no one shall be judge in his own case.
Audi alteram partem – both the parties must be heard.

If the court, while delivering judgement, ignores these principles, then such judgement shall hold no meaning. If the judge who is giving judgement is biased and not following the procedure prescribed, it shall not be conclusive. It is said that procedures are handmaids of justice. And if the rules of procedures are not followed by the court, nothing can be more harmful than that.

6. If the judgement delivered has breached any law enforced in India, then it shall not be conclusive. The judgement must not oppose any Indian policy or law.

For example, If the person does an agreement with another person for a profit of gambling money. Such judgement will not be effective in Indian courts because, in India, gambling is not legally allowed.

How Foreign Judgement is Enforceable

The judgement passed by a foreign court can be enforced in India through the following ways:

1. It may be enforced by instituting a suit within the duration of three years from the date when the judgement was pronounced.

2. It may be enforced by normally adopting the execution proceedings in section 44A of the Civil Procedure Code.

3. If the judgement can’t be executed by the court which passed it because of lack of jurisdiction or the court to which the procedures of civil code do not extend, then it may be executed in the manner as if the court had been situated in the place where this code extends.