Governor of a State – Role, Importance, and Functions 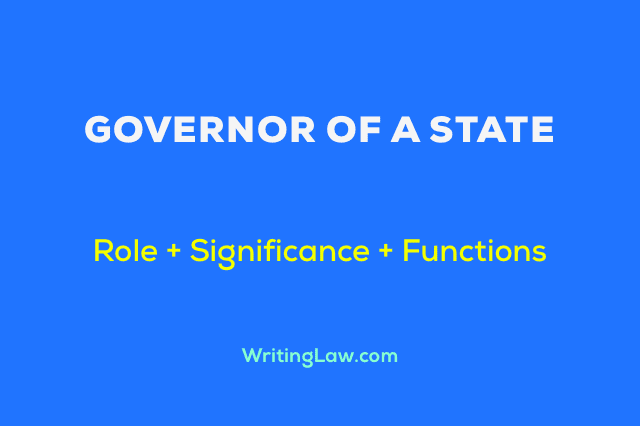 The governor is the head of the state. He is elected by the President of India and holds office at the pleasure of the President.

Article 153 of the Indian Constitution says that there shall be a governor for every state, and all the executive powers of the state vests in the governor. Therefore we can say that the post of governor is a constitutional one.

Why Governor is called a Linchpin

Linchpin means ‘a person or thing vital to an enterprise or organization.’ Sarkaria Commission has stated that the governor is a linchpin.

In India, there is a concept of cooperative federalism. The two governments that are union and state work collectively. They are not independent in their spheres. This is the reason that the governor has a unique position in linking the two sets of government.

Governor acts as a bridge between union and state. He has to communicate the state’s aspiration to the union as an elder brother and brings issues of national significance at the state level like a postman.

In Nebam Rabia vs the Union of India 2016, the Supreme Court clarified that the decisions of the governor are not beyond the scope of judicial review. The judiciary can anytime inquire about the action of the governor.

Should the Office of Governor be Abolished

The report of the Punchhi Commission in 2010 stated two points. First, there should be the removal of the phrase that ‘the governor works at the pleasure of the President.’ It should be deleted from the constitution. Secondly, that governor should be removed from his office only by resolution of the state legislature.

We derive the post of the governor from the Government of India Act, 1935, when there was British rule in India. Now, India is a free independent nation. But because we have adopted a parliamentary form of government, there is a necessity for a nominal head at the centre as well as at the state level.

Instead, there can be reforms in his post like in the case of appointment and removal. An eminent personality can be appointed as a governor who doesn’t belong to that state. This will make sure a healthy administration in the office of governor.

Recent Scenario of Powers of Governor

In recent times, there have been many instances like of Jammu & Kashmir, where the governor’s rule was imposed for six months. In the Karnataka assembly elections, 2018, when there was no single party present to form the government, the governor’s role came into the limelight. The same happened in the Uttarakhand elections in 2016.

It is said that constitutional emergency should be imposed sparingly and in extreme situations where there is no way out. Imposing emergency in a state is not a small thing but a serious concern.

“Governor is neither a decorative emblem nor a glorified cypher but has an important role in strengthening federalism.”