Constitutional Provisions that Ensure the Independence of High Court 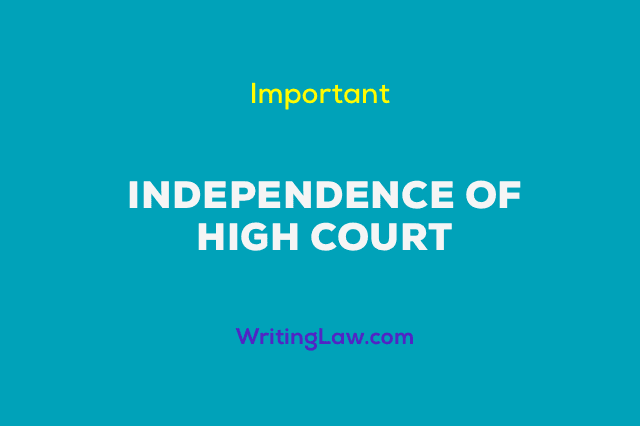 The judiciary at the state level consists of a High Court and multiple subordinate courts. The Constitution of India provides for High Court for each state. For the proper functioning of the state’s legal mechanism, it is essential that the High Court is independent and impartial.

Currently, as of 2021, there are 25 High Courts in India. The territorial jurisdiction of a High Court corresponds to the territory of a state. The Parliament can extend or exclude the High Court’s jurisdiction to any Union Territory.

Let us learn more about the above ten points that ensure the Indian High Court’s independence.

The tenure of the judge of the High Court is not fixed. A High Court judge can be removed from his office by the President on the recommendation of the Parliament only on the grounds provided in the Constitution. This means they do not hold the office at the pleasure of the President.

The salaries, allowances, leave, privileges, and pension of the High Court judges are determined by the Parliament. They cannot be changed after their appointment (except during a financial emergency).

4. Expenses charged on the consolidated fund.

5. The conduct of judges cannot be discussed.

The conduct of the High Court judges concerning the discharge of their duties cannot be discussed in the Parliament or State Legislature. However, an impeachment motion can be discussed.

6. Ban on practice after retirement.

After retirement, the permanent judges of a High Court are prohibited from pleading or acting in court or before any authority in India except Supreme Court and any other High Court. This makes sure that they do not favour anyone in the hope of future assistance.

7. Power to punish for its contempt.

A High Court can punish any person for its contempt. This ensures the authority, dignity and honour of the High Court.

8. Freedom to appoint its staff.

9. Jurisdiction of the High Court cannot be curtailed.

Neither the Parliament nor the state legislatures can curtail the jurisdiction or powers of the High Court as specified in the Constitution. But in other respect, powers and jurisdiction can be altered.

10. Separation from the executive.

The state is directed through Article 50 of the Constitution of India to take steps to separate the judiciary from the executive in state public services.

This article is written by Nupur. She recently completed LLB from Dehradun. She is creative and loves reading.
WritingLaw » Law Notes » Constitutional Provisions that Ensure the Independence of High Court

If you are a regular reader, please consider buying the Law PDFs and MCQ Tests. You will love them. You may also support with any amount you like. Thank You.
2021-07-10