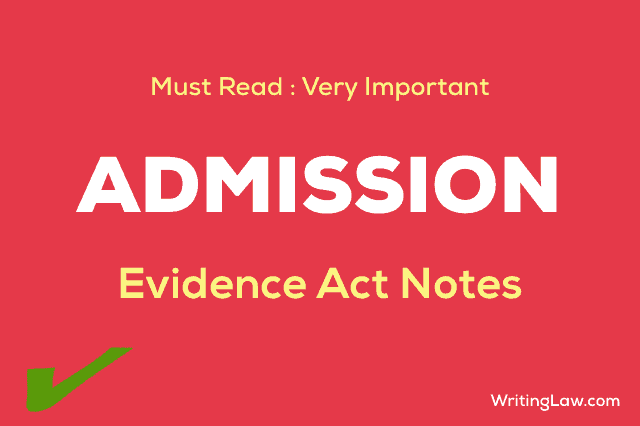 Admission Under the Indian Evidence Act

Admission is a statement that may be oral, documentary, or contained in electronic form, which suggests any inference as to the fact in issue or relevant fact. Section 17 of the Indian Evidence Act defines Admission.

Admission Can Be Formal or Informal

Admission as a Waiver of Proof

When parties make an admission of fact, it, in turn, amounts to a waiver of proof of such a fact. If a party admits any fact on its own then there is no need to give evidence to prove such a fact.

Conditions For Admissibility of Admissions

Who Can Make Admissions?

Admissions may be made by the:-

1. Party to the proceedings (Section 18)
2. By the agent of such party who is authorised.
3. Suitor in a representative character, when he held that character.
4. Party having pecuniary or proprietary interests.
5. Predecessor in the title (who was in the title before me).
6. Person whose position or liability in question. (Section 19)
7. Referee (Section 20)

Admission is not conclusive proof of the fact admitted as it is a piece of prima facia evidence only. But it may operate as an estoppel. The person can be stopped to deny the truth of the statement.

The Supreme Court in Banarasi Das vs. Kanshi Ram, 1963 said, ‘it is a weak type of evidence, and the court may reject it if the contrary is proved.’

The purpose of contradicting a witness in section 145 and the object of proving admission here is entirely different. In case of contradiction, it will be necessary to put the statement to the witness so that he will have an opportunity to explain it. But it is not so required in admission.

When Admission May be Proved

Proof Of Admission Against Persons Making Them, And By Or On Their Behalf: Section 21

Admissions will be proved against the person making it and not in his favour. The general rule is that one cannot prove a statement in his favour. But section 21 incorporates three exceptions, which, even if being self-serving, can be proved by the party. These are:-

1. Admissions falling under section 32: This exception enables a person to prove his own statement where the circumstances are such that if he were dead, the statement would have been relevant in dispute between third parties (when veracity is not in doubt it can be brought).

When Oral Admissions As To Contents Of Documents Are Relevant: Section 22

Document must be proved by the document itself. But when the document is not available, then secondary evidence may be given for it under section 65.

Section 59 says all facts except the contents of documents or electronic records may be proved by oral evidence.

Section 63(5) says oral accounts of the contents of a documents given by some person who has himself seen it.

When Oral Admissions As To Contents Of Electronic Records Are Relevant: Section 22A

Where there is an agreement to the fact either express or implied that evidence of admission will not be given, then it will not be produced/adduced before the court. It is just to encourage the parties to settle their matter of dispute with full freedom where they can diverse the things.

If you are a regular reader, please consider buying the Law PDFs and MCQ Tests. You will love them. You may also support us with any amount you like. Thank You.
2020-05-03