Everything you need to know about Mandal Commission 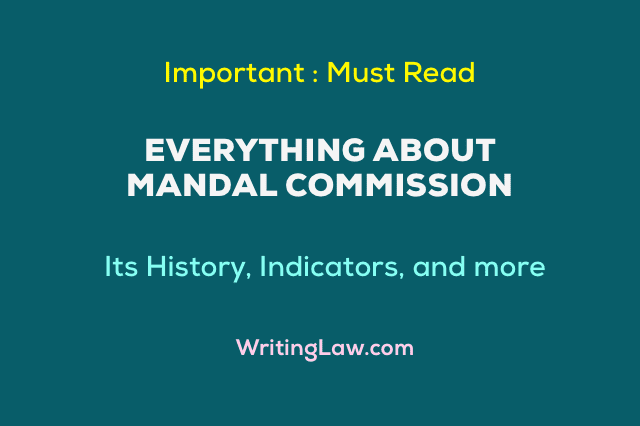 The Mandal Commission, synonymous with Socially and Educationally Backward Classes Commission (SEBC), was formed on 1st January 1979 by the Janata Party under the Prime Ministership of the then Prime Minister Morarji Desai. The commission was chaired by B.P. Mandal, who made efforts to redress the caste issues in the country. The commission report suggested the reservation of the backward classes to 49%. It drew widespread protests in 1980 after V.P. Singh Government announced its implementation. Later Hon’ble apex court had granted a temporary stay order, but from 1992 onwards, the central government implemented it in its jobs.

Why Mandal Commission was Formed

1. Part XVI of the Constitution of India states that the Lok Sabha shall represent specific castes and tribal groups.

2. Article 15 of the Indian Constitution prohibits discrimination on the grounds of religion, race, place of birth, caste, sex.

3. Article 15(4) of the Indian Constitution empowers the states to make special arrangements for promoting the interests of socially and educationally backward classes.

4. Article 16(4) of the Indian Constitution provides that the state shall reserve services favouring backward classes.

5. Article 16(4) A of the Indian Constitution provides that the state shall provide reservation to backward classes in matters of promotion.

6. Article 16(4) B of the Indian Constitution provides that reserved seats meant for promotion of backward classes which remain unfilled shall be carried forward to the subsequent year.

7. Article 243D of the Indian Constitution provides that there shall be reservation for backward classes in every Panchayat.

8. Article 330 of the Indian Constitution provides for reservation of seats in Lok Sabha for backward class.

9. Article 332 of the Indian Constitution provides for reservation of seats in State Assemblies for backward class.

10. Article 243T of the Indian Constitution provides that seats should be reserved for backward classes in every municipality.

After thorough research and data analysis, the Mandal Commission embraced eleven point criteria by grouping into the headings: social, educational and economic to get recognised as OBC (Other Backward Class).

1. Castes that others perceive to be socially backward. In other words, castes that are backward in the perception of other people in society.
2. Castes that mainly depend on their livelihoods by hand. Example: Manual/Daily wage labourer
3. In cases such as rural areas where at least 25% of women and 10% of men above the state average are married below the age of 17. Whereas, in urban areas, in those cases where 10% of women and 5% of men married below the age of 17 is above the state average.
4. Castes where female employment is at least 25% higher than the state average.

8. Where the average value of family assets is at least 25% lower than the average value of the state.
9. The castes in which the number of families living in kaccha houses is 25% above the state average. Kaccha houses refer to thatched houses or those made up of mud/clay.
10. Castes where more than 50% of the households have a water source for drinking beyond half a kilometre. It refers to those families who travel more than half a kilometre for collecting drinking water.
11. The castes in which the families taking household consumption loans are 25% above the state average.

When violent protests erupted in different parts of India, and many students died after the then Prime Minister V.P. Singh announced in the Parliament to implement the recommendations of Mandal Commission, the apex court granted a temporary stay but afterwards upheld the recommendations of the Mandal Commission. Later, when Prime Minister Narasimha Rao announced its implementation, there were no such protests.

The Supreme Court affirmed the government order in a decision on 16th November 1992, believing that caste was an appropriate indication of backwardness. As a result, in 1992, the recommendation of reservations for OBCs in central government services was enacted.

In the 1992 Indra Sawhney Judgement, Supreme Court stated that economic criteria could not be the sole basis for reservations. After the central government announced a ten per cent quota reservation for economically weaker section people, the cap had crossed the limit of 50 per cent fixed by the apex court in the Indra Sawhney case.

However, the case is pending before the court, and the court also held that a 50 per cent cap could be breached in exceptional circumstances.

The caste system is a curse to developing countries like India. All should be treated equally on the grounds of religion, race, place of birth, caste, sex; then India will develop at a faster pace. Government should take proper steps for the eradication of the caste system in India.

This article is written by Amit Kumar Das, B.Tech, LLB. He is a practicing advocate from Odisha High Court & Puri District Courts.
WritingLaw » Law Notes » Everything you need to know about Mandal Commission