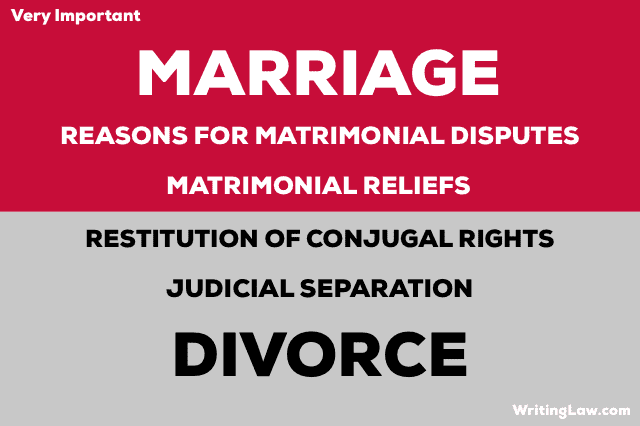 Marriage is a sacred institution. It is the very foundation of a stable family and civilised society. It gives status and security to the parties and their offspring.

It is often said that marriage is performed or done for carrying on family lineage and procreation of children. But marriage is something more pious and pure in itself.

But all marriages are not successful and eternal. At present many cases come to the face of the judiciary due to differences in interest and opinion among couples.

Infidelity: If either spouse has an extramarital affair or marriage-like relation with the person other than his or her own spouse.

Domestic Violence: Domestic violence is an act of violent and harsh behaviour (both physical and mental) of one member of the family towards another.

Control: Exercising unnecessary control and wanting to “get things done in your way” weakens the bond of marriage.

Finances: If one spouse spends money at extreme and another is a saver, there are chances for conflict to arise.

Lack of Commitment: The reasons for this may vary from person to person.

Lack of Communication: In today’s busy social and professional lifestyle, spouses rarely get time to communicate with each other.

Keeping in view the high rate of marital discord, several matrimonial reliefs have been provided in the Hindu Marriage Act, 1955.

Some of the matrimonial reliefs under the Hindu Marriage Act are:-

When one spouse leaves the other or withdraws the company of the other without any reasonable reason, the aggrieved spouse may go to court for seeking a remedy. Learn more about Restitution of Conjugal Rights in this law note.

The following three essentials have to be proved:-
1. The withdrawal by the respondent from the society of the petitioner (aggrieved party).
2. The withdrawal is without any reasonable or lawful ground.
3. The court must get satisfied with the truth of the statement made in the petition.

It is provided under Section 10 of the Hindu Marriage Act, 1955. It is a platform of last resort before the legal breakup of the marriage, which is divorce.

As soon as a decree for judicial separation is passed, a husband or a wife is under no compulsion to live with his/her spouse.

The aggrieved party to the marriage may present a petition on any of the grounds stated in the provisions for divorce under Section 13 of the Hindu Marriage Act for a decree of judicial separation.

If there is no cohabitation between the parties to the marriage for one year or more after the passing of the order for judicial separation, the parties then may apply for divorce.

The term divorce comes from the Latin word ‘divortium,’ which means ‘to separate.’ It means “the legal separation of husband and wife.”

Under Section 13 of the Hindu Marriage Act, 1955, following are the grounds for divorce:-

Adultery: The act of indulging in any sexual relationship, including intercourse outside marriage, is termed as adultery.

Cruelty: A spouse can file a divorce case when he/she is subjected to any mental and physical injury that causes danger to life, limb, and health like denying food, continuous ill-treatment, and dowry-related abuses, uncontrollable and unreasonable sexual acts.
Leading Case: Dastane vs Dastane

Desertion: If one of the spouses voluntarily abandons his/her partner for at least two years, the abandoned spouse can file a divorce case on the ground of desertion. Two essentials required:
i. Factum of desertion (statement of desertion)
ii. Animus descidendi (intention to desert)

Conversion: In case either of the spouses converts himself/herself into another religion, the other spouse may file a divorce case.

Leprosy: In case of a ‘virulent and incurable’ form of leprosy, a petition can be filed by the other spouse based on this ground. But this was the ground prior to the Personal Laws (Amendment) Bill, 2018. Leprosy has been removed as a ground for divorce as it is now a curable disease.

Venereal Disease: If one of the spouses is suffering from a severe disease that is easily communicable, a divorce can be filed by the other spouse. Sexually transmitted diseases like AIDS are accounted to be venereal diseases.
Key point: Disease must be incurable.

Renunciation: If a spouse renounces all worldly affairs by embracing a religious order, then other spouse may take a divorce.

Not Heard Alive: If a person is not seen or heard alive by those who are expected to be ‘naturally heard’ of the person for a continuous period of seven years, the person is presumed to be dead. The other spouse should need to file a divorce if he/she wants to remarry.

Section 24 of the Hindu Marriage Act provision has also been made to help the victim spouse for maintenance pendent lite and expenses of proceedings.

Section 25 of the Hindu Marriage Act provides for permanent alimony and maintenance to the spouse.

If you are a regular reader, please consider buying the Law PDFs and MCQ Tests. You will love them. You may also support with any amount you like. Thank You.
2021-04-21