What Is Primary And Secondary Evidence 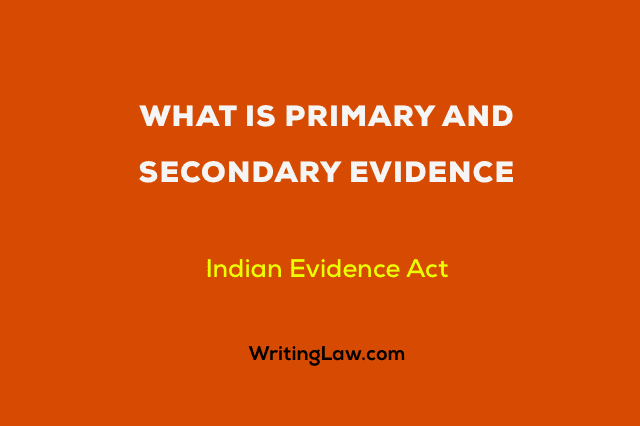 Section 61 of the Indian Evidence Act says that the content of a document can be proved by two modes – primary evidence or secondary evidence. It means there is no other prescribed method by law for proving the contents of a document.

What is Primary Evidence

Note: Even the carbon copy of a document is admissible as primary evidence since it is made by one uniform process.

What is Secondary Evidence

Section 63 of the Indian Evidence Act provides for secondary evidence. The evidence which is not primary is secondary.

What Documents Are Secondary

1. A certified copy of an original document is its secondary evidence.

5. If a person who has himself seen the document and gives an oral account of it is secondary evidence.
For example, if any person has seen or read a will of the deceased. He may give a verbal account of the contents of the will in court.

Note: Oral account of secondary evidence is not admissible. It can be given only of the primary.

How Documents Are Proved

When Secondary Evidence Can Be Given

Section 65 of the Indian Evidence Act provides for situations when secondary evidence can be given:

3. If the document which was to be produced before court is lost or destroyed, then the secondary evidence can be given.

4. If the primary evidence which is to be produced before court is not easily feasible to move, then the secondary evidence may be given.
For example, a document as per section 3 of the Indian Evidence Act can be a caricature or inscription also. And because it is not movable, secondary evidence of it can be given.

7. If the primary evidence consists of numerous documents, which is not easy to be brought before the court, then the testimony of any skilled person can be given who has examined those documents.

Read Next: 10 Recent and Landmark Case Laws for Dying Declaration

WritingLaw » Law Notes » What Is Primary And Secondary Evidence

If you are a regular reader, please consider buying the Law PDFs and MCQ Tests. You will love them. You may also support us with any amount you like. Thank You.
2020-08-28