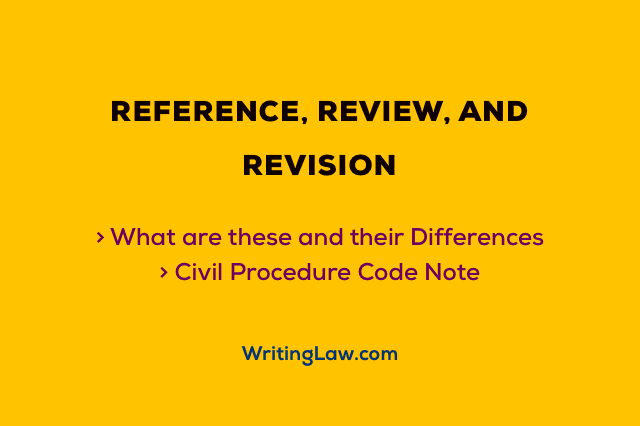 Reference means to refer an issue to someone to obtain an opinion on it. Review means to look after a thing again. Revision means to revise the matter. Let us look at all these three topics of the Civil Procedure Code, 1908, in detail now.

What is Reference in CPC

Reference means to refer an issue to someone to obtain an opinion on it. A matter is generally referred when its question can’t be decided by the court doing a trial of it.

1. Reference is mentioned under section 113 and order 46 of the Civil Procedure Code.

2. It empowers a subordinate court to refer the matter to the High Court for its opinion on a matter.

3. The power of referring a case lies only with the subordinate court. It may or may not refer a case. It is its discretion.

4. The case to be referred to the High Court must be regarding the validity of the Act.

5. The question referred by the subordinate court to the High Court must be essential for the disposal of the case.

6. Court may itself refer a case to the High Court, that is suo motu or on the application of either of the party.

7. The High Court is required to give its opinion on the matter concerned, along with the reasons.

9. The matter can be referred only in a suit, appeal, or execution and not in any other proceedings.

10. The reference can be made only when the subordinate court has a doubt on a question of law and not otherwise.

What is Review in CPC

Review means to look after a thing again. It means to re-examine again.

1. Review is mentioned under section 114 and order 47 of the Civil Procedure Code.

2. The court which has tried the case and adjudicated the matter has the authority to review the case again.

4. The application for review is submitted to the court, which has decided that case. If the judge is transferred to another court, then the application may be given to the successor judge.

5. If the court during the trial has left or not entertained any substantial issue which is relevant for the proper disposal of the case, then the case can be reviewed.

6. There is no provision for reviewing the order given by a judge in the proceedings of review.

7. The court must review its judgment if the error appears on the face of the record. And if that error is not rectified, it will cause a miscarriage of justice.

8. Court cannot review its judgment suo motu. The court reviews a case only on the application of the party.

9. What is an error on the face of the record can’t be illustrated or elaborated. It has to be understood from facts to facts and case to case.

10. If the judgment given by the subordinate court is inconsistent with the judgment laid down by the Supreme Court, then the court reviews its judgment.

1. If in a case, there is the discovery of a new or important matter or evidence, then the court can review its judgment.

2. If there is a mistake or any mathematical or clerical error on the face of the record, the court can review it.

3. If there is any other reasonable or sufficient reason for which the court is satisfied to review its judgment.

What is Revision in CPC

Revision means to revise the matter and pick out if something has been done wrongly or in the wrong manner.

1. The High Court does revision under section 115 of the Civil Procedure Code.

2. The purpose of revision by the High Court is to rectify the mistakes made by the subordinate courts during the trial of a case.

3. The High Court is empowered to do revision only in a civil case, but in criminal matters, the sessions court is also empowered along with the High Court for revision.

4. The purpose of revision is to serve the parties with the ends of justice and not to defeat their rights.

5. The High Court, while doing revision, can’t appreciate any additional or new evidence. That shall not be acceptable.

6. If any issue has been left over in trial, then such an issue can’t be brought at the time of revision.

1. The subordinate court has tried and decided such case of which it has no jurisdiction to try it.

2. When the subordinate court had jurisdiction to try the matter, but it did not exercise its jurisdiction.

3. If the court during trial and hearing left or avoided any evidence which was crucial for the impartial conclusion of the case.

4. If the subordinate court violated the principles of natural justice, that is Audi Alteram Partem and Nemo judex in causa sua.

Difference between Reference and Review

In reference, it is the subordinate court that refers the matter to the High Court. Only the High Court can decide the matter on reference. But in review, the aggrieved party makes an application to the court which delivered judgment or passed the decree.

Difference between Review and Appeal

Review means to look again or re-examine the judgment delivered by a judge. It is done in the same court. Whereas, an appeal lies to a higher court, before another judge. There can also be a second appeal in a matter. But a matter for review can’t be reviewed for the second time. There can be numerous grounds for appeal, but for review, there are countable reasons like error, substantial issue, etc.