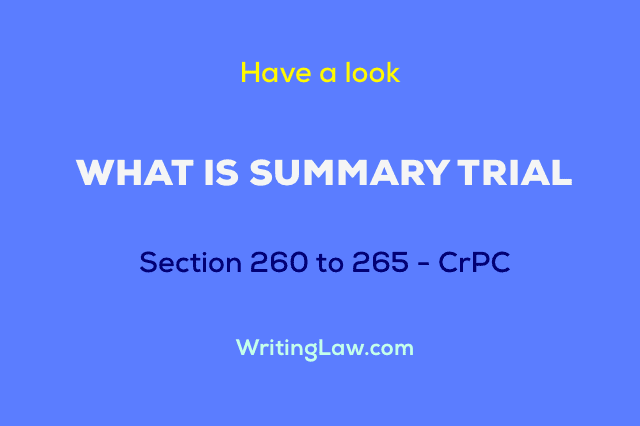 The following Magistrate may try the case summarily:

Offences that can be tried summarily

The procedure to be followed in the summary trial is the same as that in summons cases.

According to section 262(2), punishment in a summary trial cannot exceed more than three months.

According to section 260(2), during the summary trial, if it appears to the Magistrate that it is undesirable to try the case summarily, the Magistrate may recall the witness already examined and rehear the case in any other manner provided in the code.

The following information is to be filled in the form prescribed by the state government:

According to section 264, in a summary trial in which the accused doesn’t plead guilty, the Magistrate shall record the substance of the evidence, and he shall then deliver a judgement.

According to section 265, High Court may authorize any Magistrate or any officer appointed by Chief Judicial Magistrate to try a case summarily or to prepare such record or to give judgement.

If you are a regular reader, please consider buying the Law PDFs and MCQ Tests. You will love them. You may also support with any amount you like. Thank You.
2021-06-09