Functions and Roles of Comptroller and Auditor General of India (CAG)

The Constitution of India provides for an independent office of the Comptroller and Auditor General of India (CAG). He is the head of the Indian audit and accounts department. He is the guardian of the public purse and controls the financial system of the country both at the central level and state level.

CAG is one of the strongest walls of the democratic system, as the Supreme Court, Election Commission of India (ECA), and the Union Public Service Commission (UPSC).

The role of CAG evolved in British India with Lord Canning. In 1858 for the first time, a separate department was set up for auditing and accounting transactions under the East India Company.

Part V, Chapter V of the Constitution of India, talks about the Comptroller and Auditor General of India.

Article 148 speaks of the CAG, his appointment, the oath of his service.

Article 149 broadly speaks of the duties and powers of the CAG.

Article 150: The accounts of the Union and States shall be kept in such form as the President may prescribe on the advice of the CAG.

1. He audits all transactions of the Central and State Governments related to debts, deposits, funds, etc.

2. He audits the accounts of any other authority when requested by the President or Governor. For example, local bodies.

3. He advises the President with regard to the prescription of the form as to how the records of Centre and State shall be kept.

4. He submits his report relating to the Centre to the President, who then places it before both houses of Parliament.

5. He submits his report relating to State to the Governor, who then places them before State Legislature.

6. He ascertains and certifies the net proceeds of any tax or duty, and his certificate is final on the matter. 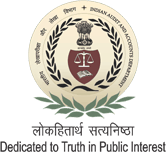 2. The CAG has to ascertain whether the money spent was authorised for the purpose for which they were spent.

3. He focuses on whether the expenditure made is in the public interest or not.

4. The role of CAG in the auditing of public corporations is limited.

5. Some corporations are audited directly by the CAG. For example, ONGC, Air India, and others.

6. Some corporations are audited by private professional auditors who are appointed by the Central Government in consultation with CAG. If necessary, there may be a supplementary audit by CAG.

7. The role of the CAG in the auditing of Government Companies is also limited. They are audited by private auditors who are appointed by the Central Government on the advice of the CAG.

The selection process is entirely internal to the Government as to what criteria are applied and how names are shortlisted. Presently there is a lack of clarity.

Two PILs have also been filed in Supreme Court against the former Defence Secretary Shashi Kant Sharma as CAG (2014-17). His appointment is thus being questioned in the context of conflict of interest and also that it goes against the code of ethics of auditors.

There is a need to frame a transparent selection procedure based on definite criteria. A selection committee may be appointed in this regard.

The current Comptroller and Auditor General of India (CAG) is G.C. Murmu (from August 2020). He is the 14th CAG of India.

Before Murmu, it was Rajiv Mehrishi who held the position from 2017 to 2020. He was elected as Vice Chairman of the United Nations Panel of External Auditors at its annual meeting held in New York.

V Narahari Rao was the first Indian Civil Servant who served as CAG.

Read Next: What Is the Role of District Commissioner