Types of Writs Under Constitution of India – Article 32 and 226 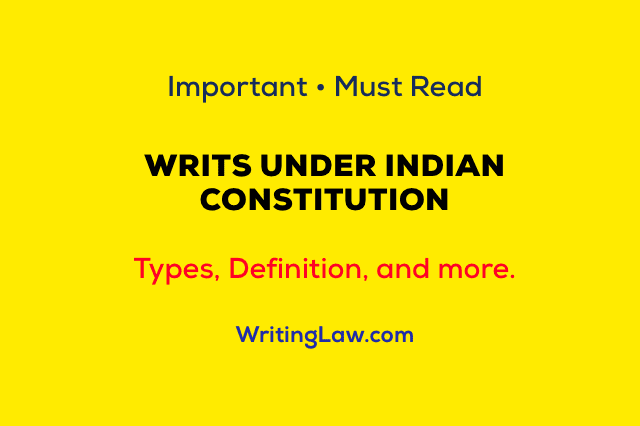 A writ is an order or command issued by a court to any person or authority to do or abstain from doing an act.

We are provided with two kinds of rights:
1. Constitutional rights.
2. Statutory rights.

Under Article 32 and Article 226 of the Indian Constitution, some constitutional remedies are provided to safeguard our Fundamental Rights.

Article 32 of the Indian Constitution

Article 32 of the Constitution of India mainly talks about two rights and powers:

Firstly, if an individual’s Fundamental Rights are being violated, they can directly move to the Supreme Court for its enforcement.

Secondly, Article 32 of the Indian Constitution empowers the Supreme Court to issue writs for safeguarding the Fundamental Rights.

Difference Between Article 32 and Article 226

The major differences between Article 32 and Article 226 of the Constitution are:

There are five kinds of writs under Articles 32 and 226 of the Indian Constitution. They are:

Let us learn more about them.

1. What is Writ of Habeas Corpus?

Habeas Corpus literally means to have the body. It is a prerogative writ. It is an order of release. It provides a remedy for a person who is wrongfully detained or restrained. Prerogative means a right or privilege exclusive to a particular individual or class.

The purpose of Habeas Corpus is not to punish the official guilty for illegal confinement or damage but to release the person.

The writ cannot be issued for the release of a person who is in judicial custody or police custody.

In Smt. Jayamma vs the State of Karnataka, the court held that the Writ of Habeas corpus could be used against State as well as the individual (who is detaining a person unlawfully).

Even during an Emergency, the Writ of Habeas corpus for the enforcement of Fundamental Rights guaranteed under Article 20 and Article 21 is maintainable.

It is to be noted that the principle of constructive res judicata is inapplicable to illegal detention and does not bar subsequent petition under Article 32 of the Indian Constitution as the Writ of Habeas Corpus.

When the Writ of Habeas Corpus cannot be used?

Writ of Habeas Corpus cannot be used in the following four conditions:

2. What is Writ of Mandamus?

Mandamus literally means a command. It is issued:
(i) in favour of the person who establishes a legal right in itself,
(ii) against a person who has a legal duty to perform but has failed to do so.

The Writ of Mandamus covers courts, tribunal, board, administrative authority, corporation or a person who is bound to perform some duty fixed by law or associated with the office occupied by the person.

The Writ of Mandamus is highly discretionary, so the relief cannot be claimed as a right.

Under the Writ of Mandamus, the court can compel an authority to do his duties or exercise his power or prevent from doing an act. Here the word ‘authority’ includes governmental, semi-governmental as well as judicial bodies.

Conditions for Writ of Mandamus.

3. What is Writ of Certiorari?

Certiorari means to certify. It is derived from common law. The Writ of Certiorari is corrective in nature. It is a command or an order issued to an inferior court or tribunal, board, authorities, officers by High Court or Supreme Court to submit the records to review.

If the order by such an inferior court is without jurisdiction or against the principle of Natural Justice, then such order will be quashed.

Grounds for issuing the Writ of Certiorari.

Against whom the Writ of Certiorari cannot lie?

The Writ of Certiorari will not lie against the following:

4. What is Writ of Prohibition?

Against whom the Writ of Prohibition cannot be exercised?

Writ of Prohibition cannot be exercised against the following:

5. What is Writ of Quo Warranto?

Quo warranto means by what authority. The purpose of the Writ of Quo Warranto is to check the legality of a person’s claim to a public office. It can be issued to check the claim of public office only. If the person is found not entitled to that public office, he can be removed from it.

Against whom the Writ of Quo warranto cannot lie?

The Writ of Quo warranto cannot lie against the following:

Conditions to issue of the Writ of Quo Warranto.

Read Next: What Is the Mini Constitution of India and Changes It Added

This article is written by Nupur. She recently completed LLB from Dehradun. She is creative and loves reading.
WritingLaw » Law Notes » Types of Writs Under Constitution of India – Article 32 and 226

If you are a regular reader, please consider buying the Law PDFs and MCQ Tests. You will love them. You may also support with any amount you like. Thank You.
2021-07-19