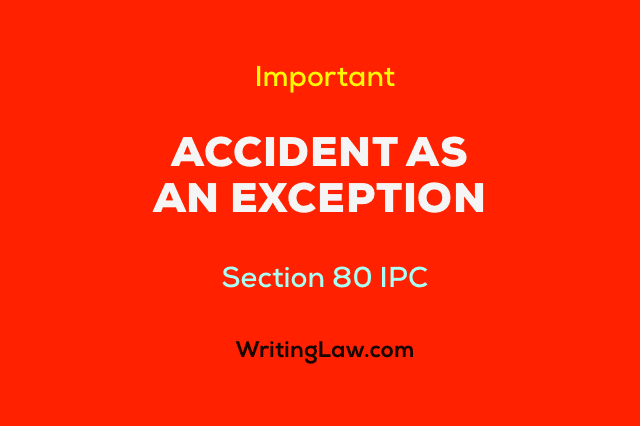 An accident is a sudden unintended act or an act by chance without any apparent cause. It is considered a defence under criminal law. The principle revolves around the theory that when a person does not have mens rea, which is an essential element of a crime, he can’t be held liable for such an act. Section 105 of the Indian Evidence Act, 1872 says that if a person alleges that his act was an accident and not a crime with the intention, then the burden of proof lies upon him to establish that his case falls under a general exception, namely accident as per section 80 of the Indian Penal Code.

Nothing is an offence which is done by accident or misfortune and without any criminal intention or knowledge, in the doing of a lawful act in a lawful manner by lawful means and with proper care and caution.

Illustration: A is at work with a hatchet; the head flies off and kills a man standing nearby. Here, if proper precautions were not taken on behalf of A, then his work shall be excusable and not an offence.

Accident as defence under IPC

Section 80 of IPC is based on the principle that no act is an offence or crime unless the one doing it has done it with criminal intent. Accident does not only mean occurrence by chance, but such occurrence must be unintended and unexpected.

This section states that if anything is done by accident or misfortune and that too without any criminal intention in doing a lawful act in a lawful manner and by all lawful means with proper care and caution, it will not be defined as an offence.

In other words, it is no offence if a person commits an act that is an offence under the eye of IPC by accident or misfortune but without any criminal intent or having knowledge of it. The act must be lawful, and it must be done in a lawful manner by lawful means.

For example, in State vs Rangaswamy (1952), A and B both went to the jungle to shoot wild rats, and both took their positions. After some time, some sound was heard, and A, believing it to be a wild rat, fired in that direction. Unfortunately, the shot caused B’s death. It was held that A was not liable for the death as the death resulted from an accident. But where two persons driving a car collide with each other. And, this resulted in injuries to drivers of both vehicles. It will be a case of misfortune.

The essential elements of section 80 can be outlined as follows:

1. The act committed must be an accident or misfortune.
Case law: State vs Rangaswamy (1952)

2. Such act must not be committed with criminal intention or knowledge.
Case law: Tunda vs State (1950)

4. The act committed must have been done with proper care and caution.
Case law: Shankar Bhadolkar vs State of Maharashtra (2004)

The burden of proof under section 80 of the Indian Penal Code lies upon the accused. It is on the accused to prove that his case falls within the exception provided under this section.

If you are a regular reader, please consider buying the Law PDFs and MCQ Tests. You will love them. You may also support us with any amount you like. Thank You.
2021-05-26