Mistake as a General Exception under IPC 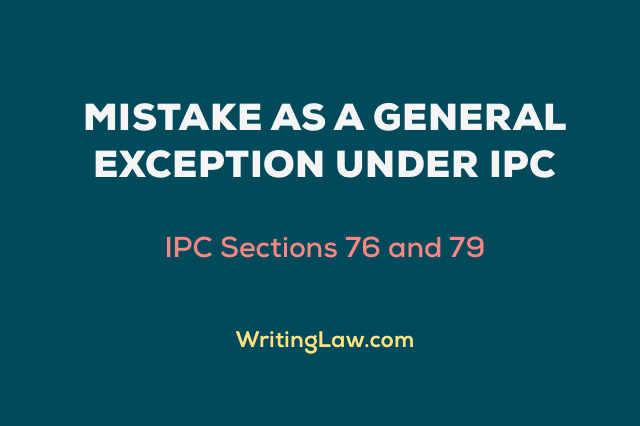 Mistake as a general exception can be understood by two sections of the Indian Penal Code, 1860. They are section 76 and section 79. The brief discussion about this topic is given below. Let us take a look.

Section 76: Act done by a person bound, or by mistake of fact believing himself bound, by law.

Illustration: ‘A’, a soldier fires on a crowd by order of his superior officer, following the commands of the law. Here, no offence has been committed by A.

One can not plead the defence of mistake of fact if the act committed is illegal. Further, no one is permitted to plead for this defence if the responsible investigation reveals the correct facts. Mistake of fact is also not accepted as a plea when the act is punished by law without reference to the mind of the wrong-doer.

Case Law:
1. Sheo Surun Sahai vs Mohomed Fazell Khan (1868): Acts that are done in moments of confusion is also preserved under section 76 of the IPC.
2. Chirangi vs State (1952)

The essential elements of section 76 can be assessed as follows:

Section 79: Act done by a person justified or by mistake of fact believing himself justified by law

Illustration: A was being tried for stealing the umbrella belonging to B. A has pleaded that he was intoxicated at the time of taking the umbrella and mistakenly believed that the umbrella was his own. The defence is justifiable because A mistook another’s umbrella to be his own in good faith.

Section 79 of IPC provides a defence to a person who commits an offence and, because of a mistake of fact and not a mistake of law, believes himself to be justified by the law in doing it.

The essential elements or ingredients of section 79 are as follows:

Difference between section 76 and section 79 IPC

Section 76 deals with cases where the person under a mistake considers himself to be compelled or bound by law to act in a particular way. Although his act is a crime on the actual condition of the facts.

On the contrary, section 79 deals with cases where a person under the mistake considers himself to be simply justified or excused by the law to act in a particular way.

Subhashini Parihar is pursuing B.A.LL.B (3rd year) from IPS Academy, Indore. She is creative, motivated, and passionate. She loves exploring and gaining knowledge about different things.
WritingLaw » Law Notes » Mistake as a General Exception under IPC