Consent as a General Exception – Section 87 to 89, IPC 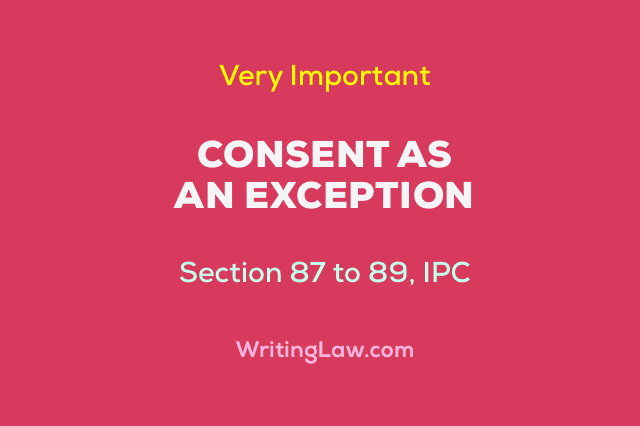 Consent means “to agree upon the same thing in the same sense.” It is said to be given when a person agrees upon a thing being done with his own will and not because of any fear, force or misconception. The element of consent excuses offences against the human body and property. Sections 87 to section 89 of the Indian Penal Code lays down that if certain acts are committed with the victim’s consent, they will not be considered an offence, and the offender will not be held liable for the same.

Consent given for any harm other than death or grievous hurt – Section 87, IPC

Section 87 of the Indian Penal Code, 1860 provides defence for certain games such as fencing, boxing, football, etc. This section says that any act which causes harm except the act intended to cause death or grievous hurt and which is not in the knowledge of the doer to be likely to cause death or grievous hurt is not an offence if it is done with the consent of a person who is above 18 years of age. The consent may be given in any manner, express or implied.

This section is based on the maxim “volenti non-fit injuria“, which means he who consents suffers no harm. In other words, if a person gives consent for an event that may cause harm to him with his own will, he accepts to suffer the harm. He can not make the other person liable for it.

A and B are playing football. B kicks a ball, and the ball hits the face of A. As a result, A got injured. Here the consent was given impliedly to suffer any harm in the course of a game. A can plead for defence.

The defence of consent is based on two submissions:
1. Every person is the best judge for itself.
2. No man will give consent for what he thinks will be hurtful to him.

To plead for the defence under section 87 of IPC, the harm must be caused under the following conditions:
1. The act causing harm must not be done with the intention or knowledge that it is likely to cause death or grievous hurt.
2. Such harm must be caused only with consent.
3. The consent must be given by a person who is above 18 years of age.
4. The consent may be express or implied.

Act done in good faith for the benefit of another person with their consent – Section 88, IPC

If a person commits an act of harm in good faith and with the consent for the benefit of that person, it will not be considered an offence. The consent may be either express or implied. However, the consent must be obtained lawfully and by a person who is capable of giving valid consent in law.

Under section 88 of the Indian Penal Code, the wrong-doer is protected even for an act causing grievous hurt but not death. In cases where a person gives consent with his will to take the risk of an operation, and the operation becomes fatal, the doctor who has done the operation cannot be punished even if it causes that person’s death.

A, a surgeon performed plastic surgery on the patient to remove the defect in the nose. The patient died during the surgery. Here, A will not be liable for the patient’s death unless there has been any gross negligence on his part.

Act is done with the consent of a guardian for the benefit of a child or a person of unsound mind – Section 89, IPC

This section provides power to the guardian of a child under twelve years of age or a person of unsound mind to give consent for the infliction of harm on them. Section 89 of the Indian Penal Code states that any act that is done for the benefit of a child under 12 years of age or of unsound mind with the consent of the guardian or any other person having lawful charge of such person and in good faith is not an offence.
However, please note that this exception shall not extend to the intentional causing of death or the attempt to cause death.

A, in good faith, for the benefit of his child, took him to a surgeon to remove the stone in his stomach. He very well knew that the operation is likely to cause the death of his child. But not intending to death, A gave his consent to get his child treated. Here, neither A nor the surgeon will be liable if the operation causes death, as their sole objective was to cure the child.

To plead for the defence under section 89 of the Code, the following elements must be fulfilled:
1. Act done must be for the benefit of a person who is of unsound mind or a child under 12 years of age.
2. Such an act must be done in good faith.
3. Act must be either done by the guardian or by the guardian’s consent or such other person who has lawful charge of that person.
4. The consent may be either express or implied.

When consent is not a defence – Section 90 IPC

The consent given must be free from any fear or misconception or such misconception of the fact that arises out of misrepresentation, fraud, etc. Any consent which is obtained illegally or unlawfully is no consent under the law.