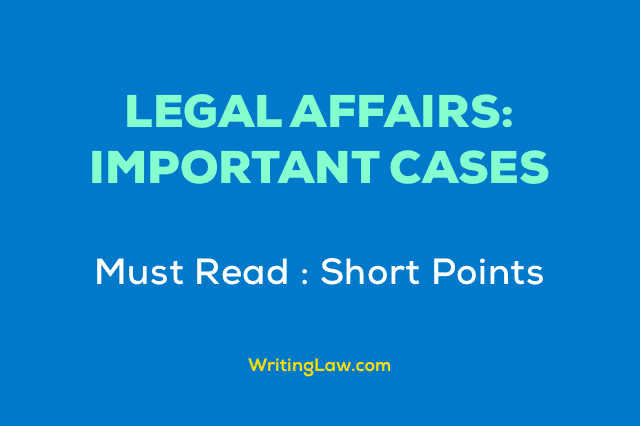 Hadia Marriage Case
Shafin Jahan vs. Ashokan
Article 19 and Article 21 of the Indian Constitution were challenged. It was held that a person is free to profess any faith or change his faith. It was also said that the Right to choose a life partner is a Constitutional Right.

Honor Killing and Khap Panchayat
Shakti Vahini vs. UOI, 2018
The Right to choose a life partner is a constitutional right and guaranteed to every person.

Common Cause
Registered Society vs. UOI
Right to die is included in Article 21 (Passive Euthanasia but not active euthanasia).

Section 377 and Decriminalisation of Homosexuality
Navtej Singh Johar vs. UOI
Article 15 and 19 of the Constitution in Concern.

1. Supreme Court in Navtej Singh Johar vs. UOI decriminalised Section 377 of the Indian Penal Code.
2. Status of gender equality given.
3. Equal opportunity in matters of employment.
4. Sexual orientation is an intrinsic part of a person’s life and liberty.

This section was put into force in 1861 in the Indian Penal Code. In Naaz Foundation vs. Government of Delhi, the Delhi High Court held that section 377 violates Fundamental Rights, and it must be decriminalised.

Supreme Court overruled the High Court ruling in 2013 because it is a concern of minuscule fraction of the country’s population. But in 2014, the transgender was introduced as a third
gender.

In 2017, the case of Puttaswamy came, which made the Right to Privacy a fundamental right
and said that sexual orientation is an essential component of identity.

In 2018 Supreme Court scrapped the controversial Section 377 (after 158 years of colonial law in Navtej Singh Johar vs. UOI).

According to the Supreme Court, Section 377 is irrational and arbitrary. It is unconstitutional and violates the Right to Privacy. The criminalisation of private sexual conduct between adults of the same sex abridged their freedom of choice and expression under Article 19. LGBT communities also have the Right to Equality under Article 14, and they are not to be discriminated on the basis of their sexual orientation.

According to International Law, it is strictly prohibited to discriminate on the grounds of sexual orientation or gender identity. (Article 6 of the UN Charter)

The Constitution is not for just majority; the Fundamental Rights are guaranteed to every person, and only a few to the citizen, and these rights do not require meritorious sanctions. The destruction of individual identity would tantamount (equivalent to) to the crushing of dignity. Attitude and mentalities have to change to set distinct identities of individuals who must be respected for who they are and not compelled to become who they are not. “I am what I am, so take me as I am.”

In Section 497 of IPC, for the offence of adultery wife can not be treated as an abettor in crime.

Joseph Srine vs. UOI, 2018
In this case, section 497 was held unconstitutional. Any law that attacks individual dignity or status of equality will be unconstitutional. Petition was filed by NRI from Kerala, challenging Article 14, 15, and 21 of the Constitution.

What was opined by honorable justice-
Women cannot be treated as chattel. J. Nariman Ability to make sexual choice us essential to human liberty (Article 21) – Indian Constitution’s beauty is that it includes I, ME, and YOU.

Outcome of this Judgement:
1. Women now no more an abettor in adultery.
2. Adultery still a ground for divorce under section 13 of the Hindu Marriage Act, 1995.
3. Adultery can not and should not be a crime. It can be a ground for civil offence, a ground for divorce where section 497 made a husband the licensor of his wife’s sexual choice.
4. Husband is not the master of wife.

In 2018 five judges bench by 4:1 majority rules that excluding women is discriminatory. Now women of all ages can enter Sabarimala temple.

Reservation in Promotion
Indira Sawhney vs. UOI
77th Constitutional Amendment added Article 16 (4A) that is reservation in promotion.

Jarnail Singh vs. Lachhmi Narain Gupta, 2018
J. Chandrachud – Reservation is valid, but no need to collect quantifiable data of backwardness to give promotion for SC and ST.

The Supreme Court of India has pushed for higher transparency in the judicial system by setting the stage for live streaming of court cases of constitutional importance.

The court directed the Central Government to frame the rules. This will encourage the principle of open court – Justice D.Y Chandrachud

The object is to aware people of public rights and to reduce dependence on second-hand views. Just like Parliament proceedings, this broadcast will ensure that the proceedings are under the public eye, hence fair and just. It also increases accountability.

Ayodhya Verdict: The journey to Ayodhya verdict was not easy but full of assertions, reasoning, contradictions, belief, faith, and more of political agenda. It took many years and the lives of people to reach a conclusion. But as it is said, justice may be delayed but not denied.

The case is famous as the Ram Janma Bhoomi-Babri Masjid land dispute case. The judgement was given by a constitutional bench of five judges of the Supreme Court headed by the Chief Justice of India Shri Ranjan Gogoi.

The Supreme Court gave the clearance for constructing a Ram temple in the disputed land, which was 5 acres, to litigant Ram Lalla. The arguments and assertions of the Hindu side were more convincing.

The court, on the other hand, gave directions to the central government to provide 5-acre land to the Sunni Wakf Board for the construction of the mosque so that the beliefs of both sides be preserved.

The judgement given by the court was more of a peaceful settlement among parties. It is an example of “justice not only be done but also seen.”

Aadhar Verdict
Aadhar Act came into force in 2016 as a money bill. In 2018 it was challenged by 4:1 bench. Supreme Court has declared the Centre flagship Aadhar scheme constitutionally valid but with conditions and pass triple test-
1. Existence of a Law (Statute Aadhar Act, 2016)
2. A legitimate state interest (Ensuring Social Benefit Schemes like Jan Dhan Yojana to reach the deserving and poor.)
3. Proportion Test: Balance between the benefit of Aadhar and potential threats it carries to the Fundamental Right to privacy.

If you are a regular reader, please consider buying the Law PDFs and MCQ Tests. You will love them. You may also support with any amount you like. Thank You.
2020-06-29