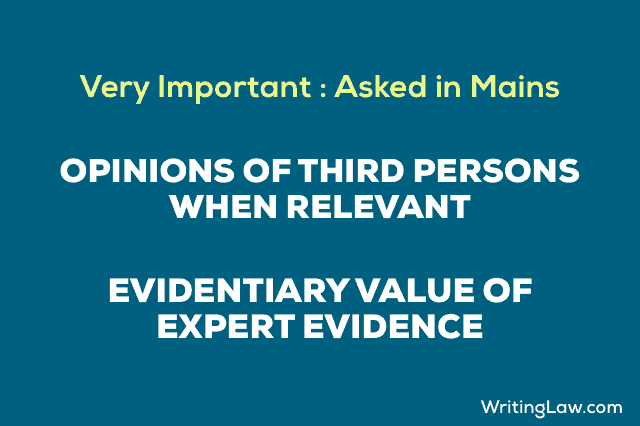 Opinion of Third Person When Relevant

This falls under Section 45 to 51 of the Indian Evidence Act. Most of the time, it is the general rule that the opinions of a third person or party are irrelevant. However, there are some instances/exceptions when the opinion of the third person is taken into consideration.

When will the court take the help of expert opinion?

This is mentioned in section 45 of the Indian Evidence Act. The court will take the help of an expert when the court has to form an opinion on the point of-
1. Foreign Law
2. Science
3. Art
4. Identity of Handwriting
5. Finger Impressions

Then the opinions by these persons specially skilled in Foreign Law, Science, Art, Identity of Handwriting, Finger Impressions, are relevant facts.

Who is an expert?

An expert is one who is exceptionally skilled in a matter. But it is nowhere essential that experts must hold any degree or particular attainment.

Abdul Rehman vs State of Mysore

Whether professional goldsmith is an expert or not? The court said particular attainment or degree is not mandatorily required. His qualification of being skilled is enough for an opinion on any matter.

Court said that though Shia Law on marriage is of foreign origin, it cannot be said to be foreign law because it is the law of the land and in force in India.

When is the Opinion of the Third Party Relevant?

1. Opinion of Examiner of electronic evidence: Section 45A

When in a proceeding the court has to form an opinion on any subject matter relating to any information transmitted or stored in any computer resource or any other electronic or digital form, the opinion of the examiner of electronic evidence referred to in Section 79A of IT Act, 2000 is a relevant fact.

When the opinion of an expert is relevant, then any fact which either supports or contradicts his opinion also becomes relevant. It is always open to parties to produce additional evidence like outstanding books, experiments, etc.

For Example: Where a psychiatrist has proved the madness of a person, then the party may give additional evidence that madness is often a hereditary character of the person.

3. When the court has to form an opinion as to the person by whom any document was written or signed, then whose opinion is relevant: Section 47

Supreme Court held that handwriting may be proved by the evidence of a witness in whose presence the writing was done, and this would be direct evidence, and if it is available, then any other kind of evidence is rendered unnecessary.

Note: Under section 73 court will compare handwriting to be proved with handwriting already admitted or proved.

4. Opinion as to electronic signature when relevant: Section 47A

5. Opinion as to the existence of right or custom, when relevant: Section 48

In the case of existence of any general custom or right, the opinion of person who would have known if it existed is relevant.

Illustration-
The right of the villagers of a particular village to use the water of a particular well is a general right within this section. The opinion of villagers will be relevant because person who would be likely to know of its existence is relevant.

6. Opinion as to usage, tenets, etc. when relevant: Section 49

When the court has to form an opinion as to-
i. Usages and tenets of any body of men or family, or
ii. Constitution and Government of any religious or charitable foundation.
iii. Opinion of person having special means of knowledge.

7. Opinion on relationship, when relevant: Section 50

When the court has to form an opinion as to the relationship of one to another, the opinion, expressed by conduct as to the existence of relationship either by-
i. A family member
ii. Other people

Having a special means of knowledge on the subject is a relevant fact. But such opinion shall not be sufficient to prove marriage in proceeding under-
i. Indian Divorce Act, 1869
ii. In prosecution under section 494, 495, 497, 498 of IPC.

8. Grounds of opinion when relevant: Section 51

The grounds or basis on which an expert makes his opinion are also relevant.

Supreme Court in Mobarik Ali vs State of Bombay, 1957 said that if a witness were permitted to express its opinion and if it is relied upon, then it may amount to delegation of the judicial function, and that is why the court should exclude it generally.

Furthermore, statements of opinion are not merely superfluous, but they may also mislead the court. A judge may rely on opinion too much, and then there may be a miscarriage of justice.

The task of inference is on the court and not on the witness, but the above general rule is subject to certain exceptions, and the reason behind the exception is that in many cases of technical nature, the opinion of expert does help the court to arrive at a satisfactory conclusion.

Furthermore, as it is the opinion of a skilled person, so it does have value. In many cases, the court does not possess professional or specialised knowledge.

Though the opinion of expert is necessary, it has certain issues-

1. There is a danger of error or deliberate falsehood.
2. After all, it is an opinion, and human judgements are fallible. (Fallible- error-prone, open to error)
3. The expert witness, however impartial, may be likely to be unconsciously prejudiced. And these factors seriously affect its probative force.

(Probative- having the quality or function of proving or demonstrating something; affording proof or evidence: Sentence Example- It places the probative burden on the defendant.)

So the reliability of such evidence has to be tested in such a way in which any other piece of evidence is tested.

In this context, it is the duty of the court to call upon an expert to explain the reason for its opinion and then to form an opinion as to whether or not the expert opinion is satisfactory. The court should not surrender its opinion to that of expert.

Expert opinion is an opinion on the basis of which court forms its opinion, but at the same time court has to be cautious as it is only an opinion and not mandatory for the court to obey the same. The opinion of an expert is not the sole basis for conviction or acquittal; rather, it helps the court in reaching to the point of conclusivity.

Read Next: What is Evidence and Ten Types of Evidence