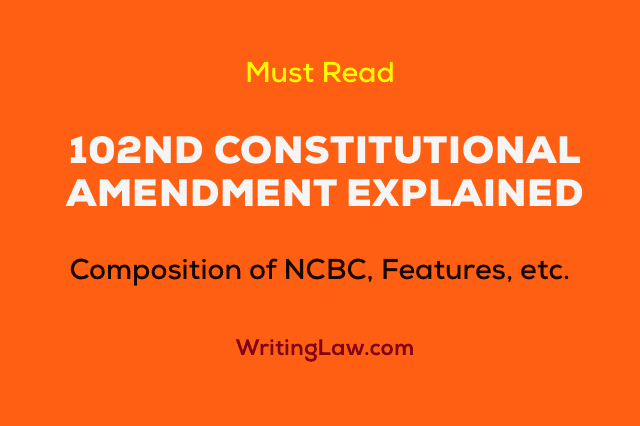 Introduction and Background of NCBC

Mandal Commission: Being dissatisfied with the approach of the Kelkar Commission in determining the criteria required for the identification of backward class, the President of India appointed the Mandal Commission on 1 January 1979. Afterwards, in the 65th Amendment of the Constitution, Article 338 was introduced, by which a constitutional body was set up for SC & ST.

This is the landmark judgement where the apex court had opined to set up a permanent body for backward classes, after which the Parliament had set up a statutory body by passing a National Commission for Backward Classes Act, 1993.

After the 89th Amendment of the Indian Constitution, which inserted Article 338A, constitutionalised the NCST (National Commission for Scheduled Tribes).

Later 123rd Amendment Bill and 102nd Amendment Act were passed by the Indian Parliament in August 2018, which renamed the earlier Commission as NCBC (National Commission for Backward Classes).

The National Commission for Backward Classes shall consist of five members to be nominated by the Central Government including a Chairperson who is/was a judge of the Supreme Court or High Court, another two members having specialist knowledge with respect to backward classes, a social expert and a member secretary who is/was secretary for Central Government.

Dr Jaishree Laxmanrao Patil vs Chief Minister of Maharashtra & Others

This is an important recent case law where the five-judge bench of the apex court had upheld the 102nd Constitutional Amendment Act by a 3:2 majority. This case law is related to Maratha Reservation. However, the apex court had stated that States could make suggestions to the President or Commission under Article 338B for modification of castes/communities in the list to be published under Article 342A clause 1.

The apex court had also reasoned that the amendment of the Indian Constitution does not in any manner neither violate the essential features nor the basic structure of the Constitution.

Corruption and Reservation are the two major issues that need to be addressed for making India a developed country. The caste-based reservation is a bottleneck in enjoying equality as enshrined in the Constitution of India.

Even the father of the Constitution, Dr B.R. Ambedkar, opposed the caste system. The caste-based reservation has given rise to corruptions, like applicant’s relying upon counterfeit documents to avail the benefits.

There is no doubt that the caste-based reservation is misused heavily, resulting in different problems like meritorious individuals failing to avail the opportunity. Experts say that the reservation for the EWS (Economical Weaker Section) is a blessing in disguise.

Until the caste-based reservation is not eradicated, the development of India will remain in dreams.

Read Next: What Is Election Law Amendment Act, 2021 and Its Pros and Cons