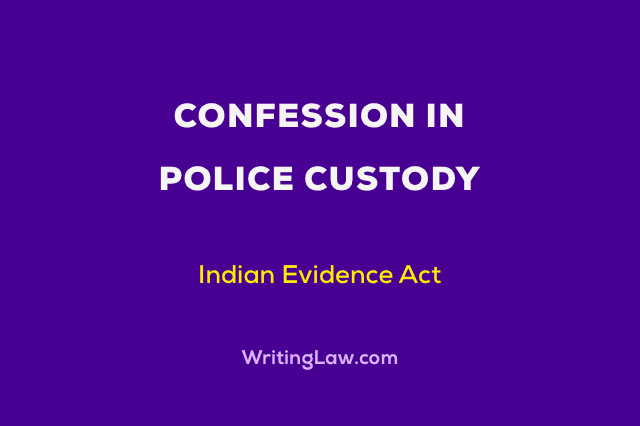 Confession is the admission of guilt. When a person commits an offence and thereafter confesses about the offence, he is said to make a confession. A person may confess to any person like a family member, friend, doctor, neighbour, magistrate, and so on.

Confession is the genus of admission. When a person admits about any fact, it is admission, but when he admits of his guilt for committing an offence, it is confession.

HEADINGS:
1. Confession to Police officer
2. Accused to be Informed of His Rights
3. What Information from Accused is Relevant

Section 25 of the Indian Evidence Act says that a confession made to a police officer is not admissible in the eyes of the law and cannot be proved against the person who made that confession.

Section 26 of the Indian Evidence Act says that, if a person who is in the custody of police, confesses his guilt is not admissible in the court of law. But if the confession is made in the presence of Judicial magistrate, then the confession is admissible and will be used against the person making it.

Accused to be Informed of His Rights

It is popularly known as Miranda exclusionary rule. The Supreme Court of the U.S. stated that if a person is arrested, then he must be informed of his constitutional and legal rights. He must be made aware of his rights that he can choose to be silent and that even if he waives his right, the waiver must be voluntary. The rule emphasizes upon the protection of the arrested person.

What Information from Accused is Relevant

As discussed in the above-mentioned provisions that confession to the police is not admissible in the court of law. But section 27 of the Indian Evidence Act says that if from the confession of accused, any fact is discovered or relates to facts already discovered, then it is relevant and such portion which helps in recovery and discovery of fact is relevant.

For example, A gives confession to the police officer that he murdered B and has hidden the gun behind the bushes of B’s house. The police, in consequence of this confession, discover the gun. So, here the portion describing about the crime weapon is relevant in that confession and not the rest.

The Supreme Court said that the portion of confession made by the accused, which leads to the discovery and recovery of fact is relevant and admissible. Section 27 of the Indian Evidence Act propounds a doctrine of confirmation through subsequent events.

Apart from this portion of confession, everything confessed by the accused shall be inadmissible. So those facts which were not in the knowledge of police and are discovered from the confession made by the accused are relevant.

Note: Section 27 of the Indian Evidence Act is not restricted to the discovery of actual physical material objects but also considers the mental awareness of the accused.

You may also like to read:
1. Statement and Confession under Section 164 CrPC
2. What is Retracted Confession
3. What is Judicial Custody and Police Custody

WritingLaw » Law Notes » Confession in Police Custody – Is it Relevant

If you are a regular reader, please consider buying the Law PDFs and MCQ Tests. You will love them. You may also support with any amount you like. Thank You.
2020-07-24