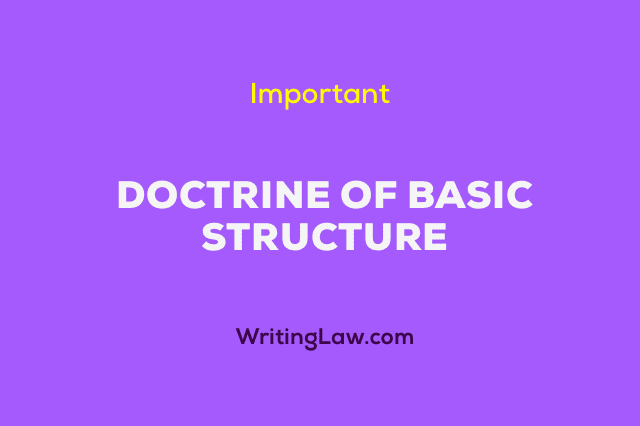 The Doctrine of Basic Structure or Feature revolves around Article 13 and Article 368 of the Indian Constitution. The whole development of basic feature/structure is a tussle between the power of judicial review and the amending power of the Constitution.

Article 13 of the Indian Constitution serves as the protector of Fundamental Rights, whereas Article 368 holds power to amend the Constitution.

Various questions regarding amendments emerged gradually after the Constitution came into force. Some of them are:

All the above questions were answered in the following landmark judgments. These are extremely important for a person in the legal field. Take a good look.

Shankari Prasad vs Union of India, 1951

The 1st Constitutional Amendment Act, 1951 was challenged in this case. There were certain laws in the amending act that were brought about, which were curtailing the right to property. To protect those laws, Article 31A and Article 31B were inserted in the Constitution.

The Supreme Court held that the word ‘law‘ in Article 13(2) includes only ordinary laws and not constituent laws.

The Parliament’s power of amending the Indian Constitution under Article 368 includes the power to amend Fundamental Rights.

Sajjan Singh vs State of Rajasthan, 1965

In this case, the 17th Constitutional Amendment Act, 1964 was challenged, which added various statutes under the IXth Schedule of the Constitution.

Sajjan Singh case was referred to a larger bench.

The Supreme Court held that the powers given under Article 368 of the Constitution are not absolute. The powers are subject to certain limitations and judicial review, and hence the Parliament cannot abridge Fundamental Rights, Article 13 will apply to the Constitutional Amendment Act.

Further, the ambit of Article 13 of the Constitution was discussed, and it was held that the word ‘law‘ in Article 13(2) includes amendments, and any amendment violative of Fundamental Rights would be void.

Kesavananda Bharti vs State of Kerala, 1973

The court gave a balanced approach and gave the Doctrine of Basic Structure. The doctrine ruled that there are certain basic features of the Constitution, and the Parliament cannot abridge Fundamental Rights that form part of the basic structure of the Constitution.

Justice Sikri gave a non-exhaustive list, and the following elements were declared as basic structure:

It was also held that the power to amend the Constitution is already implicit in it and that the 24th Constitutional Amendment Act merely made this explicit and declaratory. However, the basic structure cannot be amended.

Must See: Kesavananda Bharati & Others vs the State of Kerala – Case Explained

Supreme Court also held that the Parliament represents the will of the people, and if Constitution is to be amended, that can be done through the Parliament. Supreme Court said that the theory of basic structure is ambiguous and vague, and the addition of clauses 4 and 5 to Article 368 rectifies the situation.

In this case, the Supreme Court overturned a provision of the 39th Constitutional Amendment Act, 1975 that kept electoral disputes between the Prime Minister and the speaker of Lok Sabha out of the court’s jurisdiction. The court said that the provision was beyond the Parliament’s amending power as it affected the basic structure of the Constitution.

Then came the 42nd Constitutional Amendment Act that amended Article 368 of the Constitution, stating that there is no limitation on the constituent powers of the Parliament and that no amendment can be challenged in court for any reason, including violation of Fundamental Rights.

Minerva Mills vs Union of India, 1980

Must See: Minerva Mills Ltd. and Ors. vs Union of India and Ors – Case Explained

The Supreme Court clarified the prospective nature of the doctrine and said that the doctrine of basic structure would apply to all Constitutional Amendments enacted after 24th April 1973 (the judgement date of the Kesavananda Bharti case).

Read Next:
1. What Is the Mini Constitution of India and Changes It Added
2. Prosecution of Judges and Public Servants
3. Basic, Must-Know Introduction of the Indian Constitution

This article is written by Nupur. She recently completed LLB from Dehradun. She is creative and loves reading.
WritingLaw » Law Notes » Doctrine of Basic Structure with Landmark Judgements

If you are a regular reader, please consider buying the Law PDFs and MCQ Tests. You will love them. You may also support us with any amount you like. Thank You.
Explore WritingLaw's Homepage
2021-07-08