Five Elements of Theft, with Punishment and Case Law, IPC 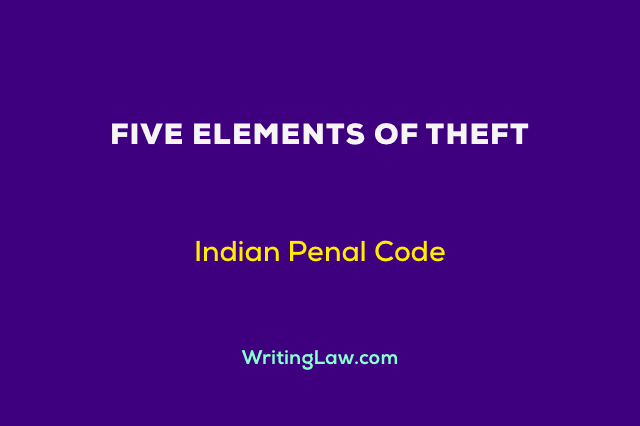 Theft is an offence against property and is defined in section 378, chapter XVII of the Indian Penal Code. For understanding what constitutes theft, we have to understand the five essential elements or conditions of theft.

What are the Five Essentials of Theft

A person constitutes the offence of theft if he:-

1. With dishonest intention,
2. Takes moveable property,
3. Out of the possession of another person,
4. Without such person’s consent,
5. And moves that property in order to take it away.

For constituting the offence of theft, the five elements of theft must be satisfied. If any essential is absent, it will not amount to theft.

If the act of a person fulfills these five elements, he is said to commit the offence of theft. It can be better understood by reading a few illustrations.

A finds a ring on a table in Z’s house. The ring belongs to Z as it is in his possession. If A removes that ring without Z’s consent. A commits theft.

A and B are friends. They study together in B’s house. One day A, in a belief that it is his book, takes away the book of B, out of B’s possession. Here A does not take it dishonestly, so it is not theft.

While severance of the subject matter, if the object or thing moves from its original place by the same act, it may be an offence of theft.

If a person removes that obstacle which obstructs a thing to move or separate the thing from any other thing, he is said to move that thing for theft.

If a person by any act induces an animal to move, is said to move that animal and also every other thing which moved due to the movement of such animal.

The consent for taking anything from a person’s possession may be implied or express. Even a person who is authorized by the owner for such purpose may also give consent.

What is the Punishment for Theft

The punishment for the offence of theft is given in section 379 of the Indian Penal Code. A person who commits theft shall be punished for any term, not beyond three years or fine or both.

According to the first schedule of CrPC, it is a cognizable and non-bailable offence.

Pyare Lal Bhargava vs. the State of Rajasthan, 1963

In this case, it was held that removing of a file from the office and giving it to a third person who is not an employee, for personal profit, constitutes the offence of theft. It is immaterial, for what duration or time period the file was moved. The moment a thing is moved from its place with dishonest intention, out of a person’s possession, without his consent, establishes the offence of theft.

Note: Even hiding of a thing in another person’s house, so that he won’t be able to search it out, has also been considered theft by many jurists. The contention behind was, that, if a person dishonestly moves any movable thing without consent and out of possession, it is theft.

If you are a regular reader, please consider buying the Law PDFs and MCQ Tests. You will love them. You may also support us with any amount you like. Thank You.
Explore WritingLaw's Homepage
2020-08-18