Glossary Of the Civil Procedure Code 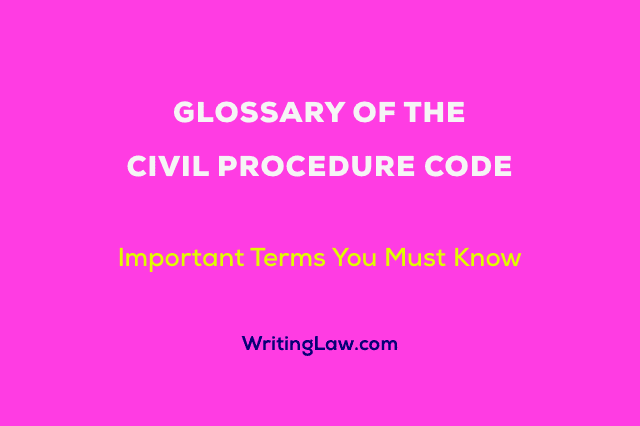 The Civil Procedure Code, 1908, is procedural law. Whenever there is a violation of a person’s civil rights, then the procedure file case in the court, and proceedings are regulated by the Civil Procedure Code. There are a total of 158 sections and 51 orders in this code. Here are the most important words of CPC that every law student must know.

1. Adjudication– To adjudicate means to decide on a matter or issue in controversy by a competent authority.

2. Rights– A legally protected interest is right. A person’s right is another’s duty because rights and duties are correlative to each other.

3. Plaint– It is the pleading of the plaintiff and his version of assertions.

4. Written statement– It is the pleading of the defendant and his version of assertions. It is the statement of defence.

5. Affidavit– It is a written document that proves that your pleading contains truth and is in the knowledge of the party.

6. Jurisdiction– It means competency or authority to decide or adjudicate a matter or dispute.

7. Civil rights– These are the rights that we get by virtue of being a private person.

9. Facts in issue– The facts which are affirmed by one party and denied by another party are facts in issue.

10. Pleadings– Pleadings is plaint and written statement of the parties. It is the matter which the parties present before the court.

11. Summons– It is a document that is issued by the court to call upon a person in court.

12. Dasti summon– Giving summons “by hand.” The summons which the plaintiff personally gives to the defendant.

13. Set off– It is a kind of cross-claim for the recovery of money which the defendant raises against the claim of the defendant.

14. Amendment– It is a kind of alteration or change in the pleadings of a party. It is to be done at the earliest possible stage.

15. Decree– It is the formal expression of a judgment in a suit. It determines the rights of the parties.

16. Attendance– It means to appear on the date and day specified by the court. It means to be present in court in person.

17. Adjournment– It means to suspend the hearing for a temporary period.

18. Admission– It means to admit a fact before the court. It may be an admission of a document, fact, statement, or any other thing.

19. Judgment– It is the conclusion of a case where the judge decides the case on merits. It is given after the final hearing of the case.

20. Indigent person– A person who is penniless, pauper, poor. He is the person who is unable to pay court fees for continuing suit.

21. Order– There can be many orders given by the court in a suit. Every order is not appealable. Order is different from a decree.

23. Replication– It is the plaintiff’s answer or reply to the defendant’s written statement.

24. Rejoinder– It is the defendant’s reply to the plaintiff’s replication or on some interim applications.

25. Attachment– It means seizing or attaching property to satisfy the demands or claims made by the plaintiff when there is apprehension that the defendant can sell off his property.

26. Garnishee– Garnishee is a debtor of judgment debtor. He is a person who is ordered by the court to pay his debts to the person who obtains a judgment in his favour against the creditor.

27. Deponent– He is the person who makes an affidavit as a witness and gives testimony in court.

28. Pre Emption– It is a preferential right to purchase property before another.

29. Prima facie case– It means the way case appears to be on the face and first instance.

30. Remand– It means to send back the case to the lower court as it was improperly sent to the higher court.

31. Merits– When the case is decided on the real controversy between the parties.

32. Cognizance– To take cognizance of a case means to take into knowledge.

33. Place of suing– It means the place or territory where the suit is to be instituted.

34. Representative suit– It is a suit that is filed by one person on behalf of himself and on behalf of others who have the same interest in the suit.

35. Execution– It is the process of enforcement of the decree. It is a means to enable the decree-holder to relish fruits of decree.

37. Suit of civil nature– A suit is of a civil nature when the principal question of suit is related to a civil right.

38. Express bar– A thing is said to be expressly barred when it is prohibited in a statute or act.

39. Implied bar– A thing is said to be impliedly barred when it is barred by general principles of law.

40. Pecuniary jurisdiction– When the jurisdiction of a suit is determined by the monetary value of the suit.

41. Subject matter jurisdiction– When the jurisdiction of a suit is determined by the matter in dispute between the parties like civil matter, family matter, and so on.

42. Precept– A precept is an order or direction given by one court to another court for an act to be done.

43. Foreign court– It is the court which is situated outside the limits of India.

44. Foreign judgment– The judgment delivered by the foreign court on a civil matter.

45. Judgment– It is the statement given by the court on the basis of decree.

46. Appeal– It is a process by which a person can appeal a judgment of the subordinate court in a higher court.

47. Counterclaim– It is like a cross suit by the defendant against the plaintiff in answer to the claim raised by the plaintiff.

48. Notice– It is an official document that the court sends to the party for conveying information related to the case.

49. Acknowledgement– It is a method to certify or declare one’s knowledge of some document. It is a statement of acceptance.

50. Record– It is the record maintained by the court keeping documents, evidences, and other important things related to a case.

If you are a regular reader, please consider buying the Law PDFs and MCQ Tests. You will love them. You may also support with any amount you like. Thank You.
2020-09-19