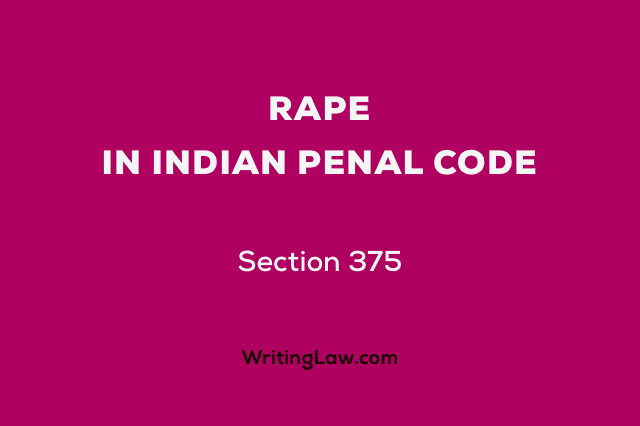 Section 375 of the Indian Penal Code requires two essentials to be satisfied for making it an offence of rape. They are:-

1. What is Rape in Indian Penal Code
2. What Circumstances Amount to Act of Rape
3. Exceptions to Offence of Rape
4. Punishment for Rape
5. Can Rape Victim Be Sole Testimony
6. Consequences of Delay in FIR for Rape

What is Rape in Indian Penal Code

According to section 375 of the Indian Penal Code (IPC), a man commits rape-

a) If he penetrates his genital into the woman’s vagina, mouth, urethra or anus, or compels the woman to do such act with him or any other person. Or,

b) If he inserts his genital part or any other part of the body or any object into the woman’s vagina, urethra or anus, or compels the woman to do such act with him or any other person. Or,

c) If he manipulates any part of the woman’s body to penetrate or insert the genital part into the vagina, urethra or anus, or compels the woman to do such act with him or any other person. Or,

d) If he puts his mouth to the woman’s urethra, vagina or anus, or compels her to do such act with him or any other person.

What Circumstances Amount to Act of Rape

1. If the man commits sexual intercourse with the woman against her will. If the woman doesn’t possess the desire to do sexual act, and the man overtakes the reasoning capability of a woman is deemed to be an act against her will and amounts to rape.

2. If the man commits sexual intercourse with the woman without her consent.

3. If the man commits sexual intercourse with the woman and has obtained consent by putting her or any person related to the woman in fear of death or hurt amounts to rape.

4. If a man commits sexual intercourse with the woman knowing that he is not her husband and the woman is consented because she believes him as her husband or with whom she is lawfully married.

5. If the man obtains the consent of a woman when she is of unsound mind or intoxicated or administered with any other such substance and when she is not in a condition to understand the nature of the act. Such sexual intercourse amount to rape.

6. If a man commits sexual intercourse with a woman with her consent or without consent, when she is under eighteen years of age (minor) amounts to rape. It is immaterial whether she consented or not.

7. If a man commits sexual intercourse with a woman when she is unable to communicate consent amounts to rape. Such a situation can be when a woman is an unsound mind, differently able, physically unfit for resistance, minor, etc.

The term vagina also includes labia mojora, the larger outer folds of the vulva. Even a slight penetration in the vulva part is sufficient to make it an offence of rape. Rupturing of the hymen in woman’s genital or emanation (discharge) of semen is not necessary.

Consent includes every form of consent by a woman, either verbal or non-verbal. It may be by words, gestures, or communication of willingness for performing the sexual act.

If a woman does not resist physically to the sexual act doesn’t mean that she has consented. The mere consideration of the fact of non-physical resistance shall not be regarded.

Exceptions to Offence of Rape

There are two exceptions to the offence of rape. The circumstances which shall not be considered rape are:-

1. A medical treatment or procedure or intervention in the genital part shall not constitute rape.

2. A man who commits sexual intercourse with his own wife is not rape. Provided that the age of the wife should not be under 18 years of age.

Punishment for the offence of rape is given under section 376 of the Indian Penal Code.

Any person who commits rape shall be punished with rigorous imprisonment of 10 years, which may extend to life imprisonment depending on the gravity of the offence and shall also be liable to fine.

Can Rape Victim Be Sole Testimony

In Wahid Khan vs. State of MP, 2010, the court held that the conviction of the accused on the basis of sole testimony of the victim is sustainable. If there are no such facts and circumstances which put a shadow on the truth and veracity on prosecution’s testimony, then there is no need for corroboration. The accused may be convicted solely on prosecution’s evidence.

Consequences of Delay in FIR for Rape

In Shyam Singh Hada vs. State of Rajasthan, 2002, the court held that if the delay in FIR is explained by the family member or victim, it is sustainable. In rape cases, there are many factors such as honor and dignity of the victim, which have to be dealt with by the members of the family. If the delay in filing FIR is not intentional or mala-fide in order to prosecute the accused maliciously, then it is acceptable by the court.

Rape is a sexual offence against a woman. If a woman is compelled to do sexual intercourse with a man without her will, it is rape. The person may be her father, teacher, or any other person. In many cases, it was found that the daughter was forced by the father to perform sexual acts.

Any undesirable sexual act with a woman is punishable in the Indian Penal Code. Even an unchaste woman is protected with the right of submission. Just because she’s a woman of easy virtue, doesn’t give any person the right to violate her protection. Her testimony is equally reliable.

Read Next:
1. What Is the Legal Status of Marital Rape in India?
2. Why Marital Rape Should Be Criminalised and Why It Shouldn’t

If you are a regular reader, please consider buying the Law PDFs and MCQ Tests. You will love them. You may also support us with any amount you like. Thank You.
2020-08-16