What is Warrant under the Criminal Procedure Code, 1973 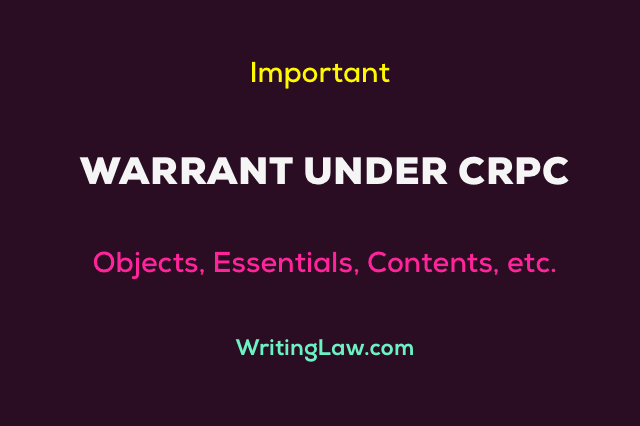 What is Warrant in CrPC

In general, a warrant is an order that serves as a specific type of authorisation issued by a Court or Magistrate directed to the police or any other authority to enable them to arrest, search a premise etc. The attendance of the accused can be procured by:

In order to arrest and detain an accused, a warrant is issued by a court. Now you may ask, what is a warrant under the Criminal Procedure Code?

A warrant is a written document issued by the court to compel the appearance or arrest of any person or search any place that the court requires. The warrant of arrest has been dealt with under section 70 to 81 in the Criminal Procedure Code.

Warrant of arrest may necessarily not only be issued to compel the attendance of the accused but is also a preventive and precautionary measure.

If a person commits a cognisable crime or is a habitual offender or an ex-convict, it is not in the public interest that such a person should be moving around freely.

Even though the Criminal Procedure Code allows a person to be arrested without a warrant in certain cases, such a person cannot remain in custody for more than 24 hours from the time of the arrest. Further, if the person is prepared to give security to appear in court during trial, then in some instances, he may be released on bail.

A warrant of arrest remains in force until it is executed or cancelled by the court which issued it.

Accordingly, it was held in Emperor vs Bindra Ahir that a warrant would not be invalid simply on the expiry of the date fixed by the court for the return of the warrant.

According to section 70 of the Criminal Procedure Code:

According to CrPC, these are the contents of a warrant:

According to section 72 of the Criminal Procedure Code, a warrant may be directed to the police officer or any person.

Execution outside the local jurisdiction

According to section 78 of the Criminal Procedure Code, when the warrant is to be executed outside local jurisdiction then, such warrant will not be directed to the police officer. Instead, it will be directed to any Executive Magistrate, District Superintendent of Police or Commissioner of Police within whose local jurisdiction the warrant is to be executed they may further endorse the name of the police officer thereon.

According to section 80 of the Criminal Procedure Code, such arrested person shall be taken before such Magistrate or District Superintendent or Commissioner in whose district arrest is made;

This article is written by Nupur. She recently completed LLB from Dehradun. She is creative and loves reading.
WritingLaw » Law Notes » What is Warrant under the Criminal Procedure Code, 1973