What is Crime and Ingredients of Crime – IPC Notes 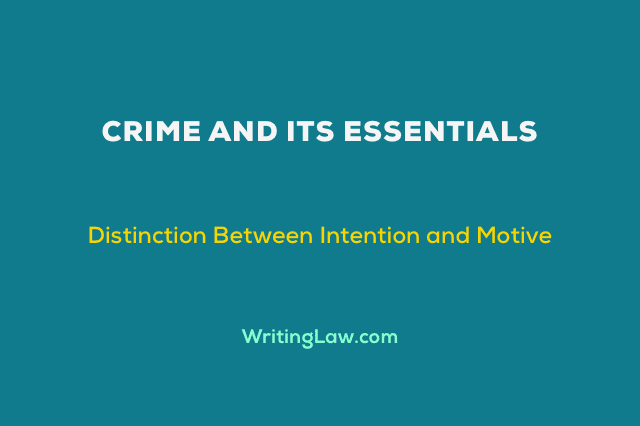 Crime is an act prohibited under law or statute.

Crime is said to be committed against the state. It is the elemental duty of the state to protect and safeguard its citizens.

If any person is injured or there is a violation of public law, then it is said that the act has been committed against the state along with the sufferer or victim. This is the reason that cases in criminal law are written against the state. For example, Vishakha vs. the State of Rajasthan or ABCD vs. the Union of India.

There are four essentials of crime:

2. There must be mens rea or the guilty mind of that person to commit a crime. There cannot be any crime without a guilty mind.

3. There must be actus reus. The act done by the person must be done with his guilty mind.

4. In consequence of that act, there must be some injury caused to the other person.

You can learn more here: Definition of Crime and its Essential Elements – Indian Penal Code

Distinction Between Intention and Motive

It is often said that there can be no offence without a guilty mind. For an offence to be committed, the offender must have the wrong intention or malafide intention to commit it. There is a maxim, “Actus non facit reum nisi mens sit rea.”

It says that the intention and act must concur with each other. The act must be born out of the intention to do so. Intention means having a purpose of doing an act with an expectation of a particular result. It is that state of mind which desires something in consequence of that act.

Section 14 of the Indian Evidence Act describes a person’s state of mind like a person’s knowledge, negligence, ill will, goodwill, rashness, and so on. All this shows and connects us with the offender’s state of mind that what was his intention for committing the crime.

Motive is something different from intention. It is something that can give birth to intention for committing or preventing any act. Intention to do a wrong may derive from the motive behind committing it.

As you have read in section 34 of the Indian Penal Code that common intention can be developed at the spur of the moment. It means it does not need any long duration to develop. But motive is something which requires some events to develop. Motive is not a minute’s development of a person’s state of mind.

In section 8 of the Indian Evidence Act, motive has been described and interpreted well.

A boy is hungry for two or three days. He ate nothing in these days. His body demands food, but he is so poor that he is unable to feed himself. He plans to steal food from a shop and becomes successful in doing so.

He is aware of the fact that he is going to commit wrong that is an offence of theft. But he had a motive behind that intention that was his hunger. He stole that food because he was hungry and had no other option available at that moment. It was his good motive behind that wrong intention.

But good motive does not mean that he shall be free from his liability. He shall be punished for his wrong. But because of the good motive, he may be set free if observed with good probate.

There were two brothers A and B. Both had a sense of love and affection for each other. A and B both do fieldwork. One day the owner of the site gave fewer wages to A than the amount decided. A repeatedly requested the owner to pay him the appropriate amount. In a quarrel between the owner and A, the owner gave a heavy blow on A’s head. As a result, he collapsed and died.

B could not accept his brother’s death. B, in order to take revenge, continued working at the owner’s site. One day, finding the owner alone, B murdered him with an axe. B is liable for the murder of the owner.

Here B’s intention was to kill the owner, and his motive of the killing was to take revenge from the owner who killed his brother, A. It is the motive of revenge that developed the intention of killing, in the mind of B.

Any act is not an offence until it is done in order to be accomplished. A person’s mental intention can’t be punished. Intention is always figured out from the overt act of a person. Intention is that action that fulfills the desired motive.

We can say that “Motive is like a matchstick which sets the target to be fired and Intention is the air which directs the conduct of fire to reach the target.”

Read Next:
1. Difference Between Motive, Intention, and Knowledge
2. 7 Categories of Crime as Per the Indian Penal Code

If you are a regular reader, please consider buying the Law PDFs and MCQ Tests. You will love them. You may also support us with any amount you like. Thank You.
2020-10-22