Definition of Crime and its Essential Elements – Indian Penal Code 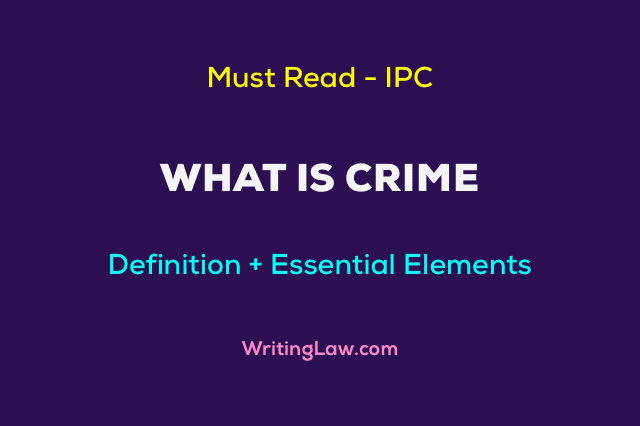 To begin, let us look at some sentences that define crime.

An action committed or omitted, which constitutes an offence and is punishable by law is a crime. Crime is an unlawful act that is forbidden and punished by the State or the law. In other words, anything which is injurious to public welfare is a crime.

Generally speaking, crime is human conduct that the society generally disapproves. But in the modern sense, crime is any act that is prohibited by the penal law in force, and the result of this is punishment.

In this law note, definitions by various jurists have been mentioned. Along with this, essential elements that constitute a crime are also given below.

Definition of Crime According to Renowned Jurists

From the above definitions, it can be said that there is no constant definition of the crime. Each jurist has defined the crime differently according to his views and opinions. Also, due to the varying nature of the content of crime, all efforts to define crime with perfection have failed.

The main elements that make up a crime are:

The first element of a crime is a human being. Any wrongful act to be called crime must be done by a human being. There must be a human being under a legal obligation to act in a particular way, and it must also be capable of being punished.

The second essential element of a crime is mens rea or guilty mind or evil intent. Mens rea refers to the mental element that is necessary for a particular crime. Any wrongful act committed by a human being cannot be called a crime if committed without evil intent. There must be an evil intent while doing an act.

There is a well-known maxim– ‘Actus non facit reum nisi mens sit rea‘. It means ‘the act itself does not make a man guilty unless his intentions were so.’ From this maxim there came another maxim- ‘actus me invito factus non est mens actus’ which means ‘an act done by me against my will is not my act at all.’

The third element of the crime is actus reus. The criminal intent to be punishable must be obvious in some voluntary act or omission. As per Kenny, ‘actus reus’ is such a result of human conduct as the law seeks to prevent. The act committed must be the one that is forbidden or is punished by the law.

An act includes omissions also. A man is also held liable if some duty is imposed upon him by law, and he omits to discharge that duty. An omission must be a breach of a legal duty.

Injury is the last important, or we can say the essential element of a crime. It must be caused illegally to another human being or a body of individuals or society at large. ‘Injury’ has been defined in section 44 of the Indian Penal Code as ‘any harm whatever illegally caused to any person in body, mind, reputation or property.’

If you are a regular reader, please consider buying the Law PDFs and MCQ Tests. You will love them. You may also support with any amount you like. Thank You.
2021-02-28