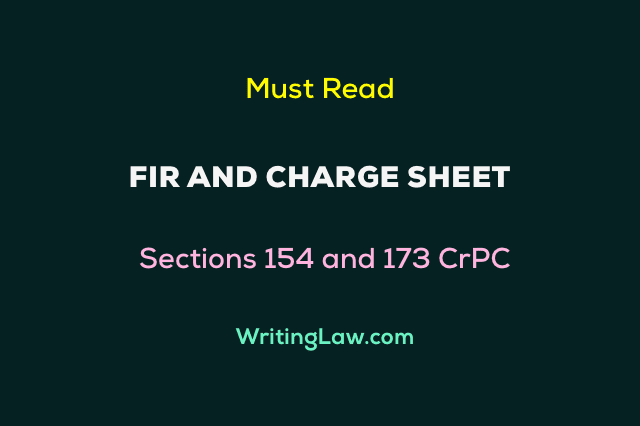 When any informant informs the police about any crime that has occurred, the police, after analysing the case is a cognizable one, registers the FIR and proceeds for investigation, arrests etc. After the investigation is over, the police submit a report to the court called a charge sheet, which forms the basis for the criminal trial.

Now that you understand the definition, let us learn more about FIR and charge sheet under the Criminal Procedure Code, 1973.

According to Section 154 of CrPC, FIR stands for First Information Report given orally or in writing to a police officer. If given orally, then it must be brought down to writing by the officer in charge of the police station. It must be signed by the informant, and a copy of FIR must be served to the same free of cost.

According to Section 2(c) of CrPC, any offence mentioned under the Code’s First Schedule is termed a cognizable offence. Upon receiving such information, the police officer may arrest the accused without a warrant and investigate without any orders from the magistrate. It includes offences like rape, murder, dacoity etc.

The primary benefits of filing an FIR are:

According to Section 173 of CrPC, a charge sheet is a report generated by police officers after investigating a case. It is submitted before the court for initiating the criminal trial.

According to section 173(2) of CrPC following shall be the contents of the charge sheet:

Note: After receiving the charge sheet, if the magistrate is not satisfied with the investigation, he may order further investigation under section 173(8) of CrPC.

According to CrPC, the prescribed time limit for filing charge sheet is as follows:

If the charge sheet is not filed within the prescribed time mentioned above, the accused has a right to default bail.

Several false cases are on the rise nowadays, filed to harass the accused, and some are filed out of grudge. There are provisions for the accused to come out acquitted in such situations. For this, the accused has to approach the High Court of the concerned State and file a petition under section 483 of CrPC, by which the High Court can quash the FIR/charge-sheet by exercising inherent jurisdiction on the following grounds.

Devendra vs State of UP 2009 SCC 495 – A civil wrong and a criminal wrong must be well distinguished. When only a civil wrong has been made out, the courts shall not allow a person to be harassed as no case of taking cognizance arises.

Wrapping up: Law is for society and against the guilty. Nowadays, police harass the accused to extort money by filing fabricated charge sheets and fake pieces of evidence in court. Courts should come out against such errant officers by punishing them. Advanced society demands smart laws, which is the need of the hour.

If you are a regular reader, please consider buying the Law PDFs and MCQ Tests. You will love them. You may also support us with any amount you like. Thank You.
2021-06-27