Laws and Policies for Protection of Children in India 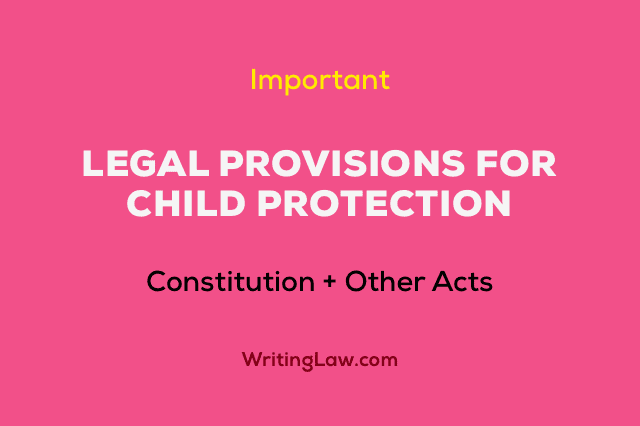 A child is considered as an important asset for any nation. The growth and future of a country mainly depend upon the fact that how developed the youth of that nation is, and what all means and policies are followed to ensure it. As the exploitation of children in every field is increasing day by day, the main object of the society is now the protection of children from all kinds of exploitation and abuses. Some of the major child issues in India are:

The Constitution of India provides various provisions for the protection, welfare, and overall development of the children so that they can have their minimum basic human rights and be protected from exploitation and abuse. Constitutional provisions (articles) that are meant specifically for children are given below.

Article 24 is directly connected to child labour. It provides that “no child below the age of fourteen years shall be employed to work in any factory or mine or engaged in any other hazardous employment.” The Supreme Court, in various cases, has prohibited the employment of children below 14 years of age in the factories like beedi and cigar making, heavy construction sites, chemical industries, coal mines, etc.

Indian Constitution directs the State under Article 39(e), to adopt protective measures so that, the tender age of children are not abused.

Article 39(f) urges upon the State to ensure that children are given necessary opportunities and proper facilities so that they can develop healthily with freedom and dignity. The section also provides for the protection of childhood and youth against exploitation and moral and material abandonment.

Article 45 provides that the State shall take measures to provide early childhood care and education for all children until the completion of six years of age. The Maternity Benefit Act, 1961, was an important step by the government towards this goal. It allows and grants paid leave for the early nourishment and care of a child.

Besides the above provisions, children also have rights as equal citizens of India, just as any other adult male or female:

LEGISLATIONS ON CHILD PROTECTION AND WELFARE

Apart from the Constitution, there are several legislations which deals with the provisions for children. Here are some of them:

It is the first statute dealing with the problem of child labour in India. This Act prohibits child labour and says that any agreement made contrary to the provisions of the Act (i.e. an agreement to pledge the labour of a child) shall be void.

The Act provides that a child below the age of 15 years will not be employed in any occupation connected with transport of passengers, goods, or mail by railways or a port authority within the limit of a port.

The Act prohibits the employment of children below 14 years of age in a factory. A child between the age of 14 and 15 years can be employed only in the restrictions that are provided under Section 68, 69 and 71 of the Act.

Accordingly, Section 40 of the Act prohibits the employment of children in underground or open cast mine. And, Section 45 prohibits persons below 18 years of age from being present in any part of a mine above ground, where any operation connected with or incidental to any mining operation is being carried out.

As per this Act, any individual who is 14 years of age or above and who has minimum educational qualification as prescribed for a trade can undergo apprenticeship training.

The punishment is provided under section 30(1) of the Act – imprisonment for a term that can be extended to six months or fine or both on an employer is provided as punishment if he employs a disqualified person as an apprentice or fails to carry out the terms and conditions of a contract of apprenticeship etc.

The Child and Adolescent Labour (Prohibition and Regulation) Act, 1986

The objectives of the Child and Adolescent Labour (Prohibition and Regulation) Act, 1986 are:

The Juvenile Justice (Care and Protection of Children) Act, 2000

The Act deals with the laws relating to juveniles in conflict with the law. It provides proper care, protection, and treatment to meet their developmental needs. It also adopts a child-friendly approach in the disposition of matters in the best interest of children and for their eventual rehabilitation through various institutions established under the Act.

The Right of Children to Free and Compulsory Education Act, 2009

The Act provides for free and compulsory education to all children of India in the age group of 6 to 14 years. As per this Act, no child will be allowed to pass a board examination until he or she completes elementary education.

Subhashini Parihar is pursuing B.A.LL.B (3rd year) from IPS Academy, Indore. She is creative, motivated, and passionate. She loves exploring and gaining knowledge about different things.
WritingLaw → Law Notes → Laws and Policies for Protection of Children in India