Mercy Petition – Article 72 and 161 of the Constitution of India 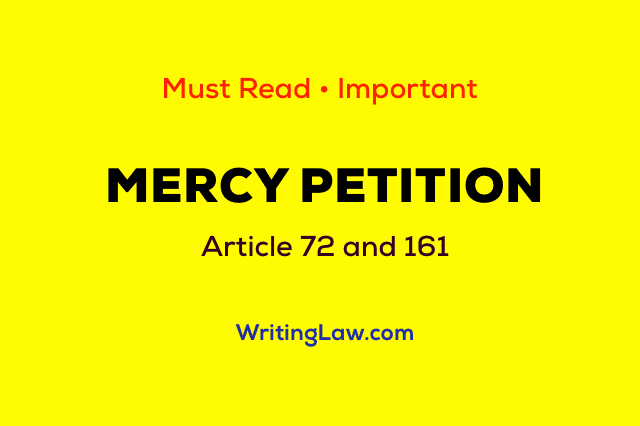 Mercy Petition is a plea made by a convict to convert capital punishment into a lesser form of punishment. It is the last resort available to the convict and is exercised when all legal remedies exhaust.

To seek a mercy petition, the death sentence by the Session Court must be confirmed by the High Court. The convict who has been given a death sentence can appeal to the Supreme Court. Suppose the Supreme Court refuses to hear the appeal or upholds the death sentence. In that case, a mercy petition can be submitted to the President of India under Article 72 of the Indian Constitution or to the Governor of state under Article 161 of the Indian Constitution.

Powers of President under Article 72

Article 72 of the Indian Constitution empowers the President to grant pardon to a person who has been convicted of an offence where the punishment is:

Under Article 161 of the Indian Constitution, the Governor of State also possess the power to grant pardons, reprieves, respites and remission or suspend, remit or commute the sentence of a convict against state law.

Difference Between Pardoning Powers of the President and Governor

The pardoning powers of the President are wide in comparison to that of the Governor as:

Proceeding at the Trial Court

The judge pronounces the judgement under section 235 of the Criminal Procedure Code. When the accused is convicted, there shall be a hearing on the question of sentence. It must be reasoned order as to why any other sentence would not meet the ends of justice.

According to section 366 of the Criminal Procedure Code, when a sentence of death is passed, it will not be executed until the High Court confirms it. The High court has the following powers:

Review and Reopening of a Review

The order passed by the Supreme Court can be reviewed by filing a review petition under Article 137 of the Indian Constitution. The review petition is to be filed within 30 days from the date of order.

The concept of curative petition evolved in Rupa Ashok Hurra vs Ashok Hurra & others. The curative petition is presented before the same bench which decided the review petition. In case of unavailability of such bench, it will be decided by the three senior-most judges of the Supreme court. A curative petition will be entertained on the ground that the petitioner establishes that there was a violation of principles on natural justice or apprehension of bias on the part of the judge.

The President of India and Governor have been granted the power to pardon, suspend, remit or commute sentences in certain cases under Article 72 and Article 161 of the Indian Constitution, as discussed earlier. The convict can file the mercy petition within seven days after the date on which the jail superintendent informs him of the dismissal of the appeal or special leave petition from the Supreme Court.

The death warrant is also known as a black warrant. It is addressed to the superintendent of jail and is later returned, certifying the execution of a death warrant. The warrant of execution of a sentence of death is given under form 42 of the Second Schedule of the Code of Criminal Procedure.

Even though the power to grant pardon is an executive power, it is more quasi-judicial in nature. In T.V Vatheeswaran vs State of Tamil Nadu, the Supreme Court has held that constitutional safeguard under Article 21 of the Indian Constitution extends to the executive disposal of mercy petitions. Article 72 is subject to the regulation of Article 21. The accused has a right to a fair hearing.

The power to grant a pardon by the President is not absolute. The power is exercised on the advice of the council of ministers. There is no procedure laid to check such a decision. In the Epuru Sudhakar case, the Supreme Court introduced the judicial review of the President’s pardoning powers. It was held by the Supreme Court that there exists the power of judicial review even on a matter which has been vested by the Constitution solely on the executive. The pardoning powers can be challenged on the following grounds:

Therefore, we can conclude that the Courts can exercise judicial review over the exercise of pardon in a very limited sense to correct an unfair or arbitrary decision.

This article is written by Nupur. She recently completed LLB from Dehradun. She is creative and loves reading.
WritingLaw » Law Notes » Mercy Petition – Article 72 and 161 of the Constitution of India