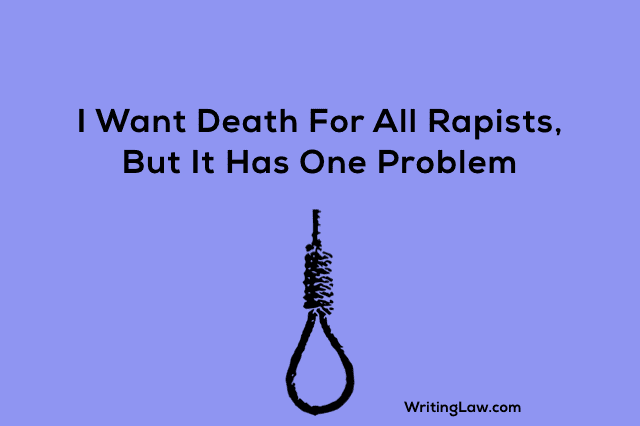 Punishment for Rape in India

There should be merciless and inexorable punishment for offenders of sexual assault. They are a menace to the civilized society and should be punished in the severest terms.

“Judges who bear the sword of justice should not hesitate to use that sword with the utmost severity if the gravity of the offense so demands.”

Rape Every Hour in India!

Nowadays, with the passage of every single hour comes news of a rape case. It has become like a ringing bell which rings after every hour to remind us that culprits need to get a stringent punishment else it is not going to stop.

It is often said that “Justice should not only be done but should also be visible.”

Death Penalty in Rare of the Rarest Cases

My question is that the Indian Penal Code already defines the death penalty in ‘rare of the rarest cases‘ as propounded in Bachan Singh vs. the State of Punjab, but where are these cases?

How many cases have been put under the category of rare of rarest theory? How many death penalties have already been given to the culprits? What’s the percentage of hanging to death?

I know you are surprised because you must be able to count it on fingers, as there are very few death penalties given.

Deterrent Theory of Punishment for Rapes

In order to minimize cases like rape, we need to adopt the “deterrent theory of punishment.”

As in today’s era, people have lost their thinking power as to what is right and wrong.

In my view, the death sentence is nothing but a joke for the person accused of rape. The punishment should be such which would deter the whole society as to make them think that if they commit such offense, then they are are going to suffer the pain.

Rape has nothing to do with the age factor; whether a girl or a woman, a mother or a sister, all are carrying the same portion of respect.

From the very basic, families need to impart sex education as it is essential to their children. Somewhere families lack in doing this. They hesitate to confront their children on sex education, which in fact, is so important. We have to break this barrier of hesitation!

India is among the top ten countries for the offense of rape. People do not have a fear of committing this offense.

Austin, in his definition of the law, said, “law is a command of sovereign passed by sanction.”
We need to work on sanctions!

This article has been written by Arushi, who is a final year law student from New Delhi, India. Opinions expressed are hers. You, too, are welcome to write.

Death in rape cases is much needed, but we have to think that if there is a death penalty for every rape case, then there may be an increase in the number of murders after rape. The rapist would be incited to murder the victim after rape so as to erase all proofs.

Rapes are usually committed in isolation. The victim is the only primary testimony to the incident of rape. Until we strengthen our police system, make CCTV cameras available in isolated streets and corners, raise mass awareness, the idea of the death penalty for EVERY rape case sounds a bit scary.

The day we have a robust mechanism in place, there should be no delay in hanging the rapist, the moment charges against him are proved.

What do you think?

WritingLaw → Articles → Death Punishment for Every Rape Has a Problem!
How to Study Law and Remember It
Best Books For All Law Subjects
10 Job and Career Options In Law
How to Write the Best Answer in Judiciary Mains Exam
2020-06-18

How to Remember Important Case Laws (2020)

How to Cover Local Laws in Judicial Exam 2020

How to Prepare for GS Paper in Judicial Exam

10 Reasons Why Indian Central Government is Powerful than State Governments