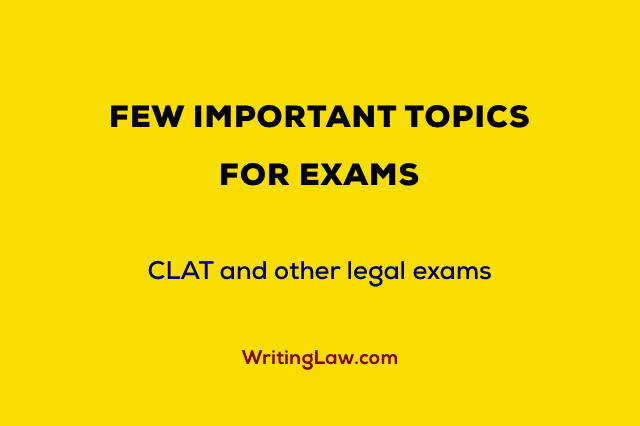 Studies have become easy with technology. Now a student can Google the questions and get an answer. But the chance of getting the most appropriate answer is still less.

During law exams, students want to score in short questions as they don’t take much time to attempt and make up a good score. It is necessary to go through important short law notes. They can be covered in less time and are useful in exam time.

With this article, I have attempted to showcase the most important law topics which may be helpful in CLAT 2020 exam, other entrance exams, judiciary, and even the LLB course. These notes are also helpful in solving MCQs faster and quickly.

Legal Bites for CLAT 2020 and Other Exams

These are some of the most important law topics for all law exams.
1. Sovereignty
2. Fundamental Rights
3. Doctrine of Severability
4. Doctrine of Eclipse
5. Writs
6. Indemnity and Guarantee
7. Bailment and Pledge
8. Pledge and Mortgage
9. Intention in Crime
10. Law of tort or torts
11. Assault and Battery

What is Doctrine of Severability

This doctrine comes into application when the validity of any part of statute or law is in question. It is argued that whether the whole statute should be declared null and void or only that part which violates fundamental rights. The doctrine says that if the invalid part can be separated from the statute, then that part must be severed and declared as void. The whole statute remains valid after severing the invalid part. But if in case the part cannot be separated, then the whole act is declared void.

What is Doctrine of Eclipse

Famous case: Bhikaji Narain vs. the State of Madhya Pradesh

Writs under Article 32 and Article 226

A writ is an order or direction issued by the court. There are five kinds of writs mentioned in the constitution. The Supreme Court has the power to issue writs under Article 32 for violation of fundamental rights and the High Courts under Article 226 for violation of fundamental rights as well as legal rights. The scope for issuing writs is wider with the High Courts in comparison to the Supreme Court.

The five kinds of writs are:-

Section 124 of the Indian Contract Act says that if in a contract one party promises to save the other party from any loss incurred, it is called a contract of indemnity. The party who promises is indemnifier and to whom promise is made is indemnity holder.

Section 126 of the Indian Contract Act defines the contract of guarantee. It is performed by a third person called surety. There are three parties to the contract – that is, the principal debtor who borrows money, creditor who gives money, and surety who ensures to discharge the liability of the debtor in case of default.

Section 148 of the Indian Contract Act defines bailment. When a person delivers his goods to the other person for a specific period of time and for some purpose, it is a contract of bailment. The person who delivers goods is bailor, and to whom goods are delivered is bailee.

Section 172 of the Contract Act defines pledge. When the goods are bailed as a security for debt, it is pledge. The bailor is pawner, and bailee is pawnee.

Law of tort or torts

There are two theories in this regard that whether it is law of tort or law of torts. Winfield said that every act which is twisted or crooked is civil wrong and tort. He said that it is law of tort, and any person who commits tort must compensate damages to the other party.

On the other side, Salmond said that every act is not torts. Only some specified and classified acts are torts. He gave a pigeon-hole theory and said that torts must lie under this theory. Any other torts which are not classified in this hole is not a tort. It means, according to him, only specified mentioned wrongs are wrongs and not any other act.

Battery is a result of assault. When the gesture of assault converts into action on a person, it is battery. It means using criminal force on another person. For example, slapping a person or beating a person wrongfully is battery.

Battery is a civil wrong, whereas criminal force is mentioned in the Indian Penal Code. Both have different procedures.

Note: This list only has a few of the most important topics. These are definitely not all. Also, you will have to read all these topics in detail.