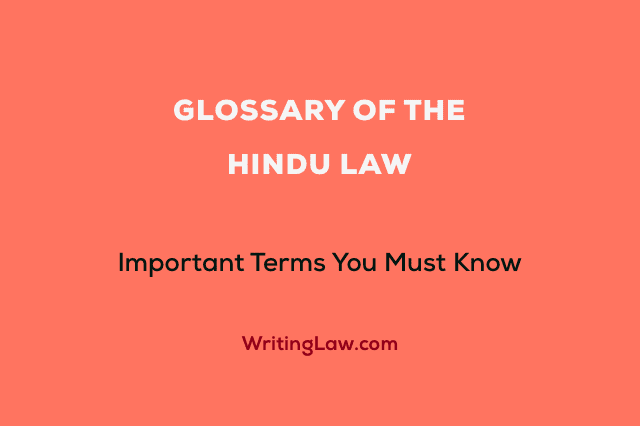 List of important words, terms, and phrases of Hindu Laws, which are useful for all law exams. These are also essential for a better understanding of the subject. Make sure you read these carefully.

1. Marriage– A union of two sexes, male and female. It is considered a sacrament under Hindu law.

2. Domicile– It is a place where the person actually resides. It can be different from the native place of a person.

3. Legitimate– It means anything which is acceptable in the eyes of the law. Like a legitimate child.

4. Illegitimate– Anything, which is not acceptable by the law or which the law does not recognize as legal.

5. Customs– These are the practices that have been observed and practiced for so long that its origin is difficult to trace.

6. Usage– Every family or community or class of people have their traditions or rituals that they use and follow in daily life. These usages, after a long period of time, take the shape of customs.

8. Half-blood– When the two persons are related to each other by common ancestor but through different ancestress.

9. Uterine blood– When the two persons are related to each other by common ancestress but through different ancestors.

10. Spouse– It refers to the marriage partner of a person. Husband and wife for each other are spouses.

11. Saptapadi– It means taking seven steps by the bride and bridegroom before the sacred or pious fire.

12. Restitution– It means to restore it back to the original position.

13. Conjugal rights– It means the right to have company and sexual relations with the spouse. ‘Company’ here means the support of the spouse in every situation.

14. Void– It means null or per se null. Anything which has no meaning in the eyes of the law.

15. Voidable– A thing is voidable when it is void or nullity at the option of one party.

16. Impotence– It is the inability of a person to perform sexual intercourse.

17. Petitioner– He or she is the person who institutes a case in the court.

18. Respondent– He or she is the person who is the opposite party in a case and defends himself or herself from the plaintiff’s accusations.

20. Desertion– It is a condition when the spouse leaves or deserts his or her spouse without any reasonable cause. It may be actual desertion or constructive desertion.

21. Renunciation– A person is said to renounce the world when he enters into a religious order leaving behind all relations and knots.

22. Adultery– When either of the spouses performs sexual intercourse with any person other than his or her spouse.

23. Consummation– A marriage is said to be consumed when the husband and the wife perform sexual intercourse after marriage.

24. Annulment– It is the legal process for cancelling a marriage. The marriage which is void and null gets annulled.

25. In-camera proceedings– These are the proceedings where no third party is present or involved other than the parties concerned.

26. Accessory– The party when helps the other party in doing any act.

27. Connived– It means to remain silent when the other party is involved in some act.

28. Condone– It means to forgive the other party for doing any act. It is a step towards restitution.

29. Pendente lite– It means during the pendency of a case.

30. Karta– He is generally the eldest member of the family who manages the joint property and looks after family requirements.

31. Coparcener– The members of the joint Hindu family are known as coparceners.

32. Joint Hindu family property– It is the property that is undivided and not partitioned. All the members have their equal shares in it.

33. Self-acquired property– It is the property that a person acquires from his own funds, other than joint Hindu family funds.

34. Intestate– When a person before he dies, does not make any will that how the property is to be disposed of after his death is said to die intestate.

35. Succession– It means to succeed or inherit from the ancestors. It may be property, funds, business, etc.

36. Survivorship– The rule of survivorship exists no more after 2005. According to it, after the intestate’s death, only those coparceners get the share who are surviving and not the predeceased. The share of predeceased also used to be distributed among surviving ones.

37. Predeceased– The person who dies before the death of the intestate.

38. Stridhana– It is the absolute property of a female Hindu. She may get this from her father, her husband, or in the form of gifts, etc.

39. Posthumous child– The posthumous child is one who is in the womb at the time of death of intestate and subsequently born alive. He has equal share like other coparceners.

40. Escheat– When there is no heir left upon whom the property of intestate can devolve, then such property devolves on the government.

41. Minor– The person who has not completed the age of eighteen years.

42. Ascendant– The relationship which is traced upwards from a person like father, grandfather, etc.

43. Descendant– The relationship which is traced downwards from a person like son, daughter, etc.

44. Reconciliation– The probability of restoring relations as before. It means to negotiate with the issues and give chance to relation to rebuild.

45. Propositus– He is the person who dies intestate and who’s property devolves through succession. The deceased person is propositus.

46. Divorce– It is the term used for the breakdown of the marriage by the act of parties.

47. Maintenance– The basic tenets of life like food, shelter, clothing, education, and medical assistance. It is the right of the dependants.

48. Concubine– A woman who lives with a man for sexual relations but does not have the status of a wife.

49. Alienation– It means the right to dispose of the property. A person may dispose of his property through a will, gift, sale, etc.

50. Partition– It is a desire of the member of a family to be separated from the joint family and get his part of share. It is not succession.

If you are a regular reader, please consider buying the Law PDFs and MCQ Tests. You will love them. You may also support us with any amount you like. Thank You.
2021-02-24