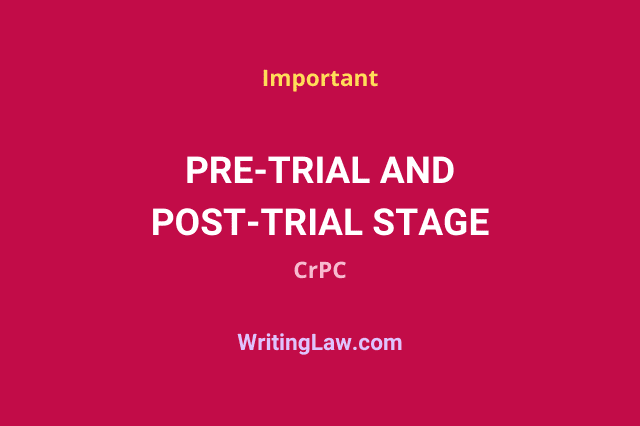 The pre-trial, trial and post-trial stages of the Criminal Procedure Code can be classified into three divisions based on the stage of the proceedings they deal with. The pre-trial stage can be referred to as the investigation procedure applicable in criminal cacustses, covered under the Criminal Procedure Code. The trial takes place after the completion of the pre-trial procedure in a court before the magistrate. Whereas the post-trial is the stage in which, with the help of evidence and examination of witnesses, the court reaches the conclusiveness of the case.

Difference Between CPC and CrPC

CPC is known as the Civil Procedure Code, which applies only to civil cases against an individual or group of individuals. In civil cases, there is a theory of Balance of Probability which means that either plaintiff or defendant has to prove the case in their favour to a limit of 51%.

CrPC is known as the Criminal Procedure Code, which applies to Criminal cases against the state. In such cases, the plaintiff or defendant has to prove their case beyond a reasonable doubt. If there exists any doubt, then it shall favour the accused. This is what criminal jurisprudence says ‘benefit of doubt always favours the accused‘.

There are three stages involved in the criminal proceeding:-

Let us learn more about these three stages in detail.

A trial is held before a judge, arbitrator, or another third party to settle disputes between the parties to fasten the justice process and reduce trial costs. The examples of pre-trial are pre-arrest investigation, custody, court judgment, and the first appearance before a municipal judge. There are chances that the dispute will be settled in the pre-trial stage, but if not, then the case is put before the court, and the trial starts.

Here are four main steps of a pre-trial.

2. Investigation: In the course of the investigation, police will perform certain steps:-

(i) Statement: Police will record the statement of the accused, informant, neighbours, witness, family member, or any other person deemed to be associated with the case.

(ii) Arrest: The police can arrest the person if any police officer saw a person committing the crime, has reasonable reasons to believe that the offence is committed by the same person or if police have an arrest warrant against that person.

(iii) Search: In the course of the investigation, police can search the property or belongings of the offender if they have the search warrant.

(iv) Seizure: Police also have the power to seize the offender’s property if it is in connection with the crime committed.

(v) Bail: The suspect’s release on bail is contingent (dependent, subject to) on their promise to appear in all planned court sessions. A suspect’s bail can be set immediately after their arrest or at a later bail review hearing. A defendant can also be released on his own “acknowledgement.”

The release is granted when the court recognizes that there would be no harm to the community, family, etc. In some situations, the arrested individual will not get bail right away and would have to wait for a court hearing. In such cases, a judge can decide whether or not the person should be released on bail, as well as the amount of bail.

There is a provision of anticipatory bail in section 438 of the Criminal Procedure Code where the magistrate gives direction to release a person on bail even before he is arrested, but while filing the application for anticipatory bail, the opposition party (plaintiff) is informed beforehand, so that they can contest the bail application in court. Anticipatory bail cannot be granted in every case. It can be given only in few cases depending upon the facts of the case.

3. Police submit a report to the Magistrate (Section 173(2) CrPC): The report submitted can be of two types, either Charge Sheet or Final Closure Report.

(i) Charge Sheet positive: The charge sheet submitted by police is positive if they have sufficient evidence against the offender to prove him guilty for certain charges.

(ii) Final Closure Report negative: Police submit the final closure report if they cannot find sufficient evidence against the offender, and the person will be set free by the court.

4. Cognizance taken by the Magistrate: The case is being transferred to the magistrate under section 190 of the CrPC. After taking cognizance, the magistrate can:-

(i) Cognizance: The trial starts with the examination of the complainant (section 200 CrPC) and then there is Issue of Process (section 204 CrPC). The trial can start keeping in mind the essential points mentioned below.

(ii) No Cognizance: In case of the Final Closure Report, the court may direct for further investigation, which is given under section 173(8) without taking cognizance under section 156(3) of CrPC, and the procedure will again start from the beginning.

CrPC provides certain rights to an accused during the investigation. These are:-

1. Knowledge of the accusation: The accused person has the right to know the reason for his accusation. CrPC provides sections 228, 240, 246, 251, which state that the person brought to the trial shall be made to understand the particulars of the crime committed by him.

2. Right to open trial: Section 327 of the Code provides for open courts for public hearings, but it also gives the presiding judge or magistrate discretion to deny access to the court to the public in general or to any particular person if he thinks it is necessary, such as during the disclosure of indecent matter, when there is a risk of a disturbance, or for any other reasonable reason.

Naresh Sridhar Mirajkar vs the State of Maharashtra: In this case, the court held that open trial could not be denied to any person except in some exceptional cases. The High Court has the inherent authority to conduct trials or portions of trials in-camera and prevent the publication of certain parts of its proceedings.

3. Aid of counsel: The accused person has the right to choose a counsel or advocate of his own choice, or else the state must provide him counsel in certain cases. In India, an arrested person’s right to counsel is recognized as a fundamental right under Article 22(1), which states that no individual shall be denied the opportunity to consult a legal practitioner of his choice. This constitutional requirement is manifested in sections 303 and 304 of the Criminal Procedure Code.

4. Protection against illegal arrest: Section 50 of CrPC states that anyone arrested must be notified of the reason for his arrest as soon as possible. When arresting without a warrant, the police must be quick to spot the likelihood of criminal activity, but they must be careful not to mistake the innocent for the guilty. The police officer has the responsibility of proving to the court that the arrest was lawful.

Trial procedure starts with a court proceeding in the trial of warrant cases by the magistrate, the trial of summons cases, and summary trial. After the trial, the case moves to the post-trial stage only if the person is not satisfied with the trial proceeding.

A post-trial proceeding takes place when, after the court’s decision, a person moves to a higher court stating that the decision given by the lower court was unfair and the higher court should amend it. After the judgment has been issued, either party may make a post-trial move, which is a motion filed after the trial has concluded. The trial court has the authority to amend a final ruling at any moment to change its language or fix calculation errors.

1. Right to human treatment: A prisoner must be treated as a human and given proper treatment even after he is found guilty. Even prisoners have certain rights which cannot be denied on any grounds. Every prisoner has the right to a clean and sanitary environment in the jail, the right to have a medical examination by a medical officer and the right to be visited by his family members.

2. Right to file an appeal: Even after the trial, if the prisoner is unhappy with the judgment passed by a magistrate, then he has the power to appeal to the higher court.

Related Law Note: Criminal Appeal and Its Kind Under CrPC

Criminal cases are tried under the Criminal Procedure Code, and every case goes through three stages of the trial, namely pre-trial, where all the investigations take place, and if the person is found guilty, then the matter is produced before the court. After the judgment given by the trial court, if any of the parties is unhappy with the judgement, then they have the power to appeal to the higher court.

Anushka Saxena is pursuing B.A.L.L.B (3rd year) from the Indore Institute of Law. She is hard-working, dedicated and committed to her work. She loves to explore new things and gain knowledge.
WritingLaw » Law Notes » Pre-trial and Post-trial Stage in Criminal Proceedings